The Present State of Catholic Knowledge: a Bad Case of Retinal Detachment and heading towards Blindness 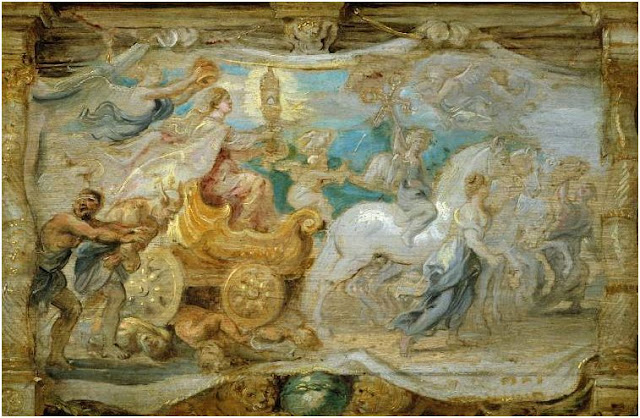 Peter Paul Rubens (1577-1640)
The Triumph of the Eucharist over Ignorance and Blindness (circa 1625 to 1626)
Oil on panel
16.2 x 24.4 cm
The Fitzwilliam Museum, Cambridge
Gregory Erlandson, the President of Our Sunday Visitor Publishing gave an address to the Catholic Press Congress at the Vatican on 4th October 2010
It is worth reading in its entirety. It is a .pdf file.
The address covered a lot of ground and not only about the present state of the Catholic Press in America and worldwide.
One issue which he focused on was the decline in knowledge about the faith. His remarks were quite startling. They seem to echo what has been said in other conferences, media and events, not only in the United States but also in the United Kingdom and other parts of Europe.
He said:

"[W]e now have two generations of Catholics who have been significantly under-catechized in their own faith. A larger and larger share of our potential audience often does not understand Catholic vocabulary or Catholic concepts.
A recent survey documenting the lack of religious knowledge among Americans said that a majority of Catholics do not know what the Church teaches about the Eucharist, for example.
I had a personal encounter with this ignorance a few days ago here in Rome.
At the Basilica of San Clemente, an archeological treasure where the entire history of Christianity is represented in its many levels, my colleague and I met a young, bright, good looking American couple who had stopped us to ask us some questions about the church.
It started with simple questions such as, “What do the keys on the papal coat of arms stand for?” But with each answer, they had another question: “Is it true Constantine was the first pope?” they asked. “Didn’t he kill all the pagans?” “What is liturgy?”
It turned out that both young people were baptized and raised as Catholics. They went to Catholic schools. As adults, they left the Church, our Church, and have become nondenominational Christians.
The encounter reminded me of a statement by the former chair of the theology department of the University of Notre Dame, Dr. John Cavadini, who bemoaned “the religious illiteracy of so many otherwise well-educated young Catholics” at Catholic universities.

“This vast ignorance,” he wrote, “is not just a question of missing bits of information, retinal holes marring an otherwise excellent field of vision. It is something more like a retinal detachment, a whole field of vision pulling inexorably away toward blindness. Not only are the words gone, the bits of information, but the system in which the words made sense is failing.”

This is not only a problem for young people. In fact, many Catholic publications are dependent on a shrinking older audience that still retains a knowledge of Catholic concepts and terminology, while many Catholics young and old have a poor understanding of what the Church teaches and why it teaches it. ...
Pope Benedict, during his recent trip to England, quoted Blessed John Henry Newman:

What Cardinal Newman called for is what we as U.S. publishers not only need, but can help to shape: An informed Catholic laity ready and willing to engage the world, and who see the value of the Catholic press – whether in print or digital – as a means of deepening their own understanding of the faith and seeing their world, their culture, their society through the lens of this faith."