The British Museum in London has a number of interesting woodcut prints from the late 15th and early 16th centuries relating to St Bridget of Sweden (1303 -1373). Here are some with the commentaries from The British Museum just below the images of the prints. 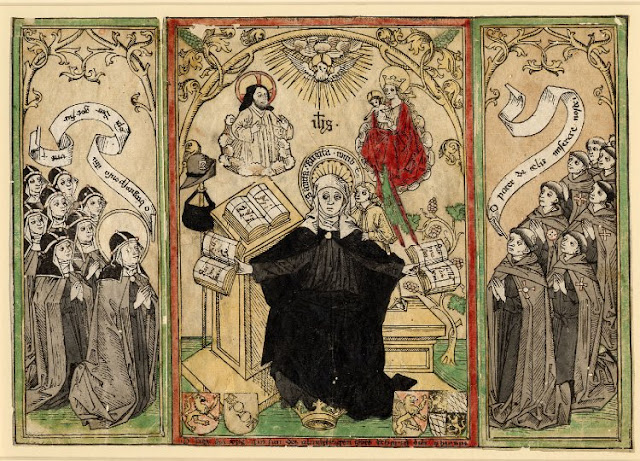 Inscription Content:
Inscribed in pen in the book on the lectern: 'Vidi pallaciumagnu', and on the two books of her rule, 'Der swestern sülln sein lx' and 'Der priester sülln sein xiii' ;
Lettered in the block on the saint's nimbus: "Sancta Birgita witib" ;
On the left scroll starting. "o birgitta....";
In the centre at lower margin, starting with "O her ihu...."; and
On the right scroll: "O pate de celis miserere nostri."

In the centre the saint sits on a bench, holding an open book in each hand with a crown at her feet and an angel at her right shoulder, God the Father on a cloud is above left, and the Virgin with Child on a cloud above right; underneath are the coats of arms of Sweden, Bavaria and Palatinate;
On the the left sheet eight Brigittine nuns kneel with folded hands towards the right at the front kneels Bridget's daughter, St Catherine of Sweden;
On the right sheet kneel eight praying monks. 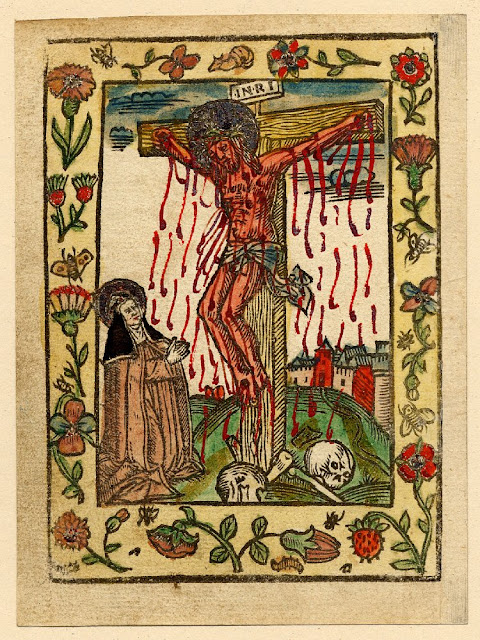 Anonymous
The Crucifixion with St Bridget in Adoration 1495-1510
Hand coloured woodcut print on paper
111 millimetres x 80 millimetres
The British Museum, London
This cut together with other cuts in the possession of The British Museum form a group with a common origin, from the Brigittine convent 'Marienwater' near Hertogenbosch
These prints derive from the Brigittine convent of Marienwater which was founded c.1434-40.
Approximately 160 manuscripts survive from the abbey (many of them seventeenth-century), including 85 now in the archive of the convent of Maria Refugie in Uden, where the nuns fled after the suppression of their own abbey in 1713.
Brigittine monasteries sprang up all over Europe, and there were three in the Netherlands, the largest at Hertogenbosch in the diocese of Liège. The most famous English house was that at Syon (London)
The houses were unique in the Middle Ages for including both monks and nuns in the same communities, although in practice the buildings were so constructed that the men and women never met or even saw each other.
Her book, The Revelationes is in thirteen books and were written partly by her: Books I, II and V were written in Sweden with the help of Magister Mathias; Book II dated from the period when she was in Rome (1349-72), and Book VII from the Holy Land (1372-73). Book XI was compiled by St Bridget and Magister Petrus Olavi in Rome. Book IX (Extravagantes) was compiled in Sweden after her death and canonisation in 1396
Her writings attained great popularity during the fifteenth and early sixteenth centuries.
The first complete German translation of St Bridget's visions was printed in 1500 under the auspices of Emperor Maximilian who showed great interest in St. Bridget. He desired that South Germany should have access to printed versions in both Latin and German. Maximilian indeed had ordered the Orationes of St. Bridget to be read to him the day before his death
Some historians attribute her prophecies of divine chastisement led to the forment which led to the Reformation.
On Wednesday past (27th October 2010) Pope Benedict XVI made St Bridget the topic of his talk in the series relating to holy women in the Medieval Period.
The brief sketch of her life and some of her works is set out in the speech.
He reminded us of the great devotion and veneration which his predecessor Pope John Paul II had for St Bridget of Sweden. Indeed it was Pope John Paul II who declared her one of the Co-Patronesses of Europe along with Saints Catherine of Siena and Edith Stein
The declaration of St Bridget as co-Patroness of Europe appears to have been a particular concern of the late Pope. Here are only a small number of his speeches and homilies on St Bridget:
Saturday, 31 October 1987 Address to a group of young artists from Sweden
8 June 1989 Welcome ceremony at Arlanda International Airport in Stockholm, Sweden on the occasion of his visit to Sweden
Friday, 9 June 1989 Ecumenical prayer service at the Lutheran Cathedral of Uppsala, Sweden
Saturday, 10 June 1989 Holy Mass in the courtyard of Vadstena Castle, Sweden
7 October 1991 To the participants of the International Study Conference on Saint Bridget of Sweden (Italian only)
1 October 1999 Motu Proprio Spes aedificandi proclaiming St Bridget and others as Co-Patronesses of Europe
Friday, 1 October 1999 Homily for the Second Special Synod Assembly for Europe
13 November 1999: Homily in the Papal Chapel for the Ecumenical celebration in remembrance of St. Bridget of Sweden, co-patroness of Europe
Monday 20 December 1999 Address to the ambassador of Sweden
Friday, 17 May 2002 Address to the new Ambassador of Sweden
21st September 2002 Address to the Abbess General of the Order of the Most Holy Saviour of St Bridget
4 October 2002, Ecumenical celebration of Vespers on the 7th centenary of the birth of St Bridget of Sweden, Co-Patroness of Europe
Pope John Paul II in his speeches and homilies was always keen to stress the importance of St Bridget to Ecumenism.
Certainly from a Swedish and Scandinavian perspective, St Bridget has been one of the main focus points for increasing contacts between the Roman Catholic Church and the Scandinavian Lutheran churches.
Diplomatic relations between Sweden and the Vatican were only established in 1982
Pope John Paul II visited Sweden in 1989 and in May 1991 King Karl Gustaf XVI of Sweden and Queen Silvia paid an official visit to the Vatican.
Then on October 5 1991 there was an Ecumenical prayer service at St. Peter's Basilica, for the occasion of the Sixth Centenary of the canonization of St. Bridget of Sweden. For the first time since the Reformation two Lutheran bishops prayed in St. Peter's Basilica with the Pope, together with the Catholic bishops of Stockholm and Helsinki.
This was followed by another ecumenical vesper ceremony at St Peters Basilica in 1999.
This was immense progress consideriing that it was only in 1951 that Sweden passed a law in regard to religious freedom. Swedish accession to the European Convention of Human Rights and also the European Union was opposed by those who used anti-Catholic sentiments.
Much economic aid for the Swedish Catholic Church comes from the German Episcopal Conference of Catholic bishops
But both Popes John Paul II and Benedict XVI have also been keen to use St Bridget as an exemplar to promote other themes of their teaching.
First, the family and morality. Many Protestant evangelicals in Scandinavia are attracted to this aspect of Catholic teaching which might be rather surprising in view of the past historical view of Swedish society.
As Pope Benedict XVI said in his recent address:

"Bridget, spiritually guided by a learned religious who initiated her in the study of the Scriptures, exercised a very positive influence on her own family that, thanks to her presence, became a true "domestic church." Together with her husband, she adopted the Rule of the Franciscan Tertiaries. She practiced works of charity towards the indigent with generosity; she also founded a hospital. Together with his wife, Ulf learned to improve his character and to advance in the Christian life. On returning from a long pilgrimage to Santiago de Compostela, taken in 1341 with other members of the family, the spouses matured the plan to live in continence, but shortly after, in the peace of a monastery to which he had retired, Ulf concluded his earthly life.
The first period of Bridget's life helps us to appreciate what today we could define an authentic "conjugal spirituality": Together, Christian spouses can follow a path of sanctity, supported by the grace of the sacrament of Marriage. Not infrequently, as happened in the lives of St. Bridget and Ulf, it is the wife who with her religious sensibility, with delicacy and gentleness, is able to make the husband follow a path of faith. I am thinking, with recognition, of so many women who, day in day out, still today illumine their families with their testimony of Christian life. May the Spirit of the Lord fuel the sanctity of Christian spouses, to show the world the beauty of marriage lived according to the values of the Gospel: love, tenderness, mutual help, fecundity in generating and educating children, openness and solidarity to the world, participation in the life of the Church."

Second, the dignity and importance of women in the Church. Interestingly in his recent address Pope Benedict XVI said:

"[S]he also wished to obtain from the Pope the approval of the rule of a religious order that she wanted to found, dedicated to the Holy Savior, and made up of monks and nuns under the authority of an abbess. This is an element that should not surprise us: In the Middle Ages there were monasteries founded with masculine and feminine branches, but with the practice of the same monastic rule, which provided for the direction of an abbess.
In fact, the great Christian tradition recognizes the dignity proper to women, as well as -- taking as an example Mary, Queen of the Apostles -- her own place in the Church that, without coinciding with the ordained priesthood, is also important for the spiritual growth of the Community. Moreover, the collaboration of consecrated men and women, always with respect toward their specific vocation, is of great importance in today's world."