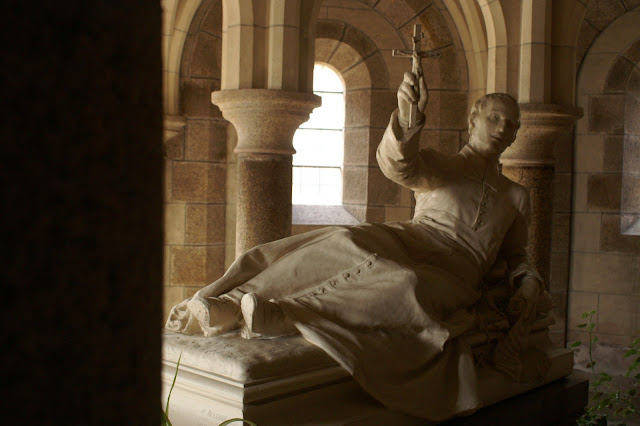 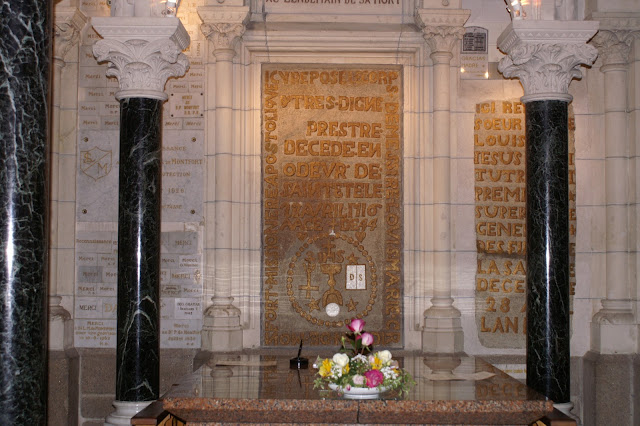 Tomb of Louis-Marie Grignion de Montfort
The Basilica Saint-Laurent, Saint Laurent sur Sèvre
In the month of October, the month of the Rosary, the life and works of St. Louis-Marie Grignion de Montfort are recalled.
St. Louis-Marie Grignion de Montfort (31 January 1673 – 28 April 1716) died aged 43 years. His devotion to Mary was great. His Marian influence on many Popes has been profound. He is slated to be a Doctor of the Universal Church
His contemporary followers included Blessed Marie Louise Trichet and Catherine Brunet, along with Marie Valleau and Marie Régnier
On September 19, 1996, the great Marian Pope, Pope John-Paul II (who beatified Marie Louise Trichet) came to the Basilica Saint-Laurent, at Saint Laurent sur Sèvre to meditate and pray on the adjacent tombs of Saint Louis and Blessed Marie Louise Trichet.
The particular moment which St Louis had on Pope John Paul II is illustrated by the fact that the Pope`s motto "Totus Tuus" is derived from St Louis` writings and that the Pope publicly acknowledged the influence of the saint on his spiritual life.
On 16th October 2002, Pope John Paul II in his Apostolic Letter on the Rosary, Rosarium Virginis Mariae wrote:

"The Rosary mystically transports us to Mary's side as she is busy watching over the human growth of Christ in the home of Nazareth.
This enables her to train us and to mold us with the same care, until Christ is “fully formed” in us (cf. Gal 4:19). This role of Mary, totally grounded in that of Christ and radically subordinated to it, “in no way obscures or diminishes the unique mediation of Christ, but rather shows its power”.This is the luminous principle expressed by the Second Vatican Council which I have so powerfully experienced in my own life and have made the basis of my episcopal motto: Totus Tuus.
The motto is of course inspired by the teaching of Saint Louis Marie Grignion de Montfort, who explained in the following words Mary's role in the process of our configuration to Christ:

Never as in the Rosary do the life of Jesus and that of Mary appear so deeply joined. Mary lives only in Christ and for Christ!"

On 8 December 2003 Pope John Paul II wrote to the Men and Women Religious of the Montfort Families about St Louis Marie Grignion de Montfort, his life and writings and their profound effect on him. He wrote:

"A work destined to become a classic of Marian spirituality was published 160 years ago. St Louis Marie Grignion de Montfort wrote the Treatise on True Devotion to the Blessed Virgin at the beginning of the 1700s, but the manuscript remained practically unknown for more than a century. When, almost by chance, it was at last discovered in 1842 and published in 1843, the work was an instant success, proving extraordinarily effective in spreading the "true devotion" to the Most Holy Virgin.
I myself, in the years of my youth, found reading this book a great help. "There I found the answers to my questions", for at one point I had feared that if my devotion to Mary "became too great, it might end up compromising the supremacy of the worship owed to Christ" (Dono e Mistero, Libreria Editrice Vaticana, 1996; English edition: Gift and Mystery, Paulines Publications Africa, p. 42).
Under the wise guidance of St Louis Marie, I realized that if one lives the mystery of Mary in Christ this risk does not exist. In fact, this Saint's Mariological thought "is rooted in the mystery of the Trinity and in the truth of the Incarnation of the Word of God" (ibid.).
Since she came into being, and especially in her most difficult moments, the Church has contemplated with special intensity an event of the Passion of Jesus Christ that St John mentions:

Throughout its history, the People of God has experienced this gift of the crucified Jesus: the gift of his Mother. Mary Most Holy is truly our Mother who accompanies us on our pilgrimage of faith, hope and charity towards an ever more intense union with Christ, the one Saviour and Mediator of salvation (cf. Constitution Lumen Gentium, nn. 60, 62).
As is well known, my episcopal coat of arms symbolically illustrates the Gospel text quoted above; the motto Totus tuus is inspired by the teaching of St Louis Marie Grignion de Montfort (cf. Gift and Mystery, pp. 42-43; Rosarium Virginis Mariae, n. 15).

These two words express total belonging to Jesus through Mary: Tuus totus ego sum, et omnia mea tua sunt, St Louis Marie wrote, and he translates his words: "I am all yours, and all that I have is yours, O most loving Jesus, through Mary, your most holy Mother" (Treatise on True Devotion, n. 233).
This Saint's teaching has had a profound influence on the Marian devotion of many of the faithful and on my own life. It is a lived teaching of outstanding ascetic and mystical depth, expressed in a lively and passionate style that makes frequent use of images and symbols. However, the considerable development of Marian theology since St Louis Marie's time is largely due to the crucial contribution made by the Second Vatican Council. The Montfort teaching, therefore, which has retained its essential validity should be reread and reinterpreted today in the light of the Council."