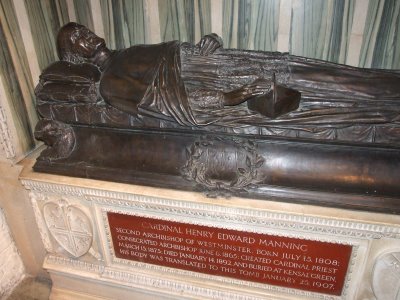 The Tomb of Cardinal Manning in Westminster Cathedral, London
Much attention has been devoted naturally to the Life and Works of Blessed John Henry Newman created a Cardinal by Pope Leo XIII and now beatified by Pope Benedict XVI
The attention has overshadowed the life and works of the other great Catholic Cardinal in Victorian England: Henry Edward Cardinal Manning (1808-1892)
Manning was unfortunate in the choice of his first authorised biographer: Edmund Sheridan Purcell who wrote a rather biased and negative life of the Cardinal after his death. This was followed by an extremely unattractive mischaracterisation by Lytton Strachey in his "Eminent Victorians"
During his lifetime he was regarded as one of the most important Catholic theologian in the English speaking world. He was highly regarded by Blessed Pius IX as well as Pope Leo XIII. Leo XIII`s famous social encyclical Rerum Novarum owes much to the Cardinal.
To remedy the lack of knowledge about Manning, a Society and website have been established to promulgate knowledge about the Cardinal: The Cardinal Manning Society
Posted by Unknown at 10:52 am