Beauty in the Liturgy 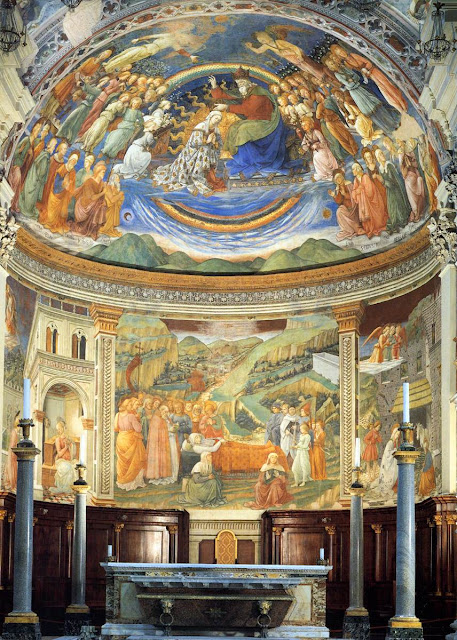 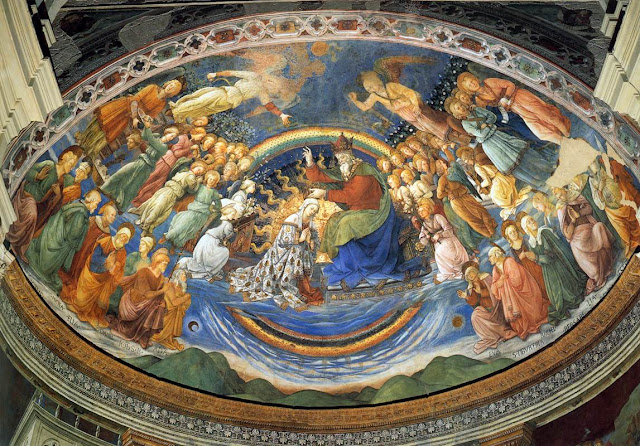 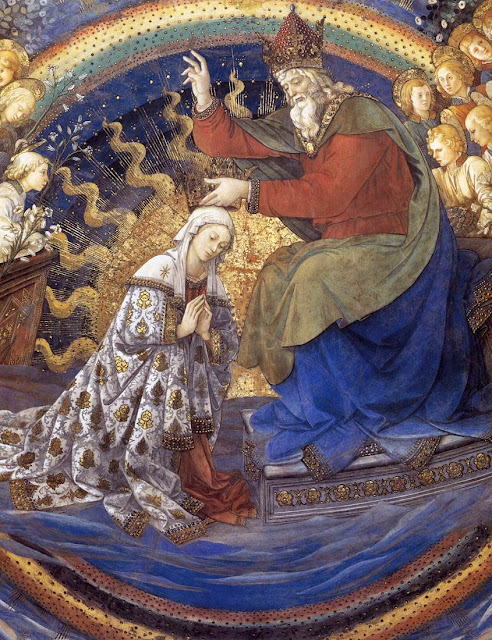 This is the last work of Fra Lippo Lippi. He died and was buried in Spoleto. His pupils, especially his friend Fra Diamante and Pier Matteo d’Amelia, finished the remainder of the work (an Annunciation and a Nativity) after his death
His Wall tomb memorial in Spoleto cathedral, was completed c. 1492 by Andrea di Cristoforo Bregno (1418–1506)
His frescoes of Prato and Spoleto were inspirations for Ghirlandaio and Botticelli. As they have been and are for congregations of the Cathedral at Spoleto, past present and no doubt in the future.
The website of the Archdiocese of Spoleto-Norcia has beautiful images of the works and some interesting commentary.
It appears to be an archdiocese where the bishops and clergy are very responsive to the great cultural history of their area and are properly appreciative of it. It is in their bones and it suffuses their activities in the life of the Church. It is clearly a powerful tool in their efforts at mission and evagelisation.
The whole website of the Archdiocese is worth looking at (despite being only in Italian)
Liturgy of course is primary.
Beauty has an important part to play in the celebration of the Liturgy but is subordinate to it.
The question of Beauty in the Liturgy has been raised in fact just today in two posts about the problems experienced by the distinguished Scottish composer James Macmillan in composing a musical work for the Papal Masses in the United Kingdom
See Father Ray in James MacMillan: Bullied by Liturgists and Father Z in Composer James MacMillian explains what happened before the Papal Visit
It might be worthwhile re-examining the concluding document of the Plenary Assembly on the theme of "The Via Pulchritudinis: Privileged Pathway for Evangelisation and Dialogue" It attempted to explain the relationship between Liturgy and Beauty. It did so in quite clear convincing and compelling terms.
Beauty in Liturgy is not elitist and everyone can participate in beautiful liturgy in their own and different ways
It said:

"The beauty of the love of Christ comes to meet us each day not only through the example of the saints but more so through the holy liturgy, especially in the celebration of the Eucharist where the Mystery becomes present and illuminates with meaning and beauty all our existence.
This is the extraordinary means by which our Saviour, once dead and resurrected, shares His life with us, making us part of His Body as living members and making us participate in His beauty.
Pavel Florenskij described beauty in the liturgy, symbol of the symbols of the world as that which permits the transformation of time and space "in the holy, mysterious temple that shines with celestial beauty." (P. Florenskij, Les portes royales. Essai sur l’icône, Milan 1999, 50.)
During a conference at the 23rd National Italian Eucharistic Congress, Cardinal Ratzinger cited in his introduction the old legend about the origins of the Christian faith in Russia.
According to this legend, Prince Vladimir of Kiev decided to adhere to the Orthodox Church of Constantinople after having heard his ambassadors who had been sent to Constantinople where they had been present at a solemn liturgy in the basilica of Saint Sophia.
They said to the prince, "We did not know whether we were in heaven or on earth…We are witnesses: God has made His dwelling place there among men."
And the Cardinal theologian took from this legend the basis of truth:

"it is in effect certain that the internal force of the liturgy played an essential role in the diffusion of Christianity…That which convinced the ambassadors of the Russian prince, that the faith celebrated in the Orthodox liturgy was true, was not a missionary style argument whose elements appeared more convincing to those disposed to listen than those of any other religion. No, that which struck home was the mystery in itself, a mystery that, precisely because it is found beyond all discussion, imposes on reason the force of truth." (Cardinal Joseph Ratzinger, Eucharistia come genesi della missione. Conference at the XXIII Eucharistic Congress of Bologna, 20-28 September 1997 in "Il Regno" 1 Nov 1997, n° 19, p.588-589)

How can we fail to underline the importance of icons, the marvellous heritage of the Christian East, which still today gives something of the liturgy of the undivided Church: its rich and deep language thrives on its roots in the experience of the undivided Church, the Roman catacombs, the mosaics of Rome and Ravenna as well as Byzantium?
For the believer, beauty transcends the aesthetic. It permits the passage from "for self" to "more than self."
The liturgy which is disinterested and does not seek to celebrate God for Him, through Him and in Him, is not beautiful, and therefore not true.
It should be "disinterested" in "putting oneself before God and placing one's eyes on Him who shines with the divine light on the things that pass." It is in this austere simplicity that it becomes missionary, that is, capable of witnessing to observers who let themselves be taken over by the invisible reality that it offers.
The French writer Paul Claudel allured to the internal force of the liturgy in witnessing to his conversion during the singing of the Magnificat during Vespers on Christmas Eve at Notre-Dame de Paris:

"It was then that the event happened that has dominated all my life. In an instant, my heart was touched and I believed. I believed with such force, with such relief of all my being, a conviction so powerful, so certain and without any room for doubt, that ever since, all the books, all the arguments, all the hazards of my agitated life have never shaken my faith, nor to tell the truth have they even touched it." (P. Claudel, Ma conversion in Contacts et circonstances, Gallimard, 1940, p. 11ss; cf. also in Ecclesia, Lectures chrétiennes, Paris, No 1, avril 1949, p. 53-58.

The beauty of the liturgy, an essential moment in the experience of faith and the pathway towards an adult faith, is unable to reduce itself to mere formal beauty.
It is first of all the deep beauty of the meeting with the mystery of God, present among men through the intermediary work of the Son, "the fairest of the children of men" (Ps 45, 2) who renews without end His sacrifice of love for us.
It expresses the beauty of the communion with Him and with our brothers, the beauty of a harmony which translates into gestures, symbols, words, images and melodies that touch the heart and the spirit and raise marvel and the desire to meet the resurrected Lord, He who is the Door of Beauty.
Superficiality, banality and negligence have no place in the liturgy.
They not only do not help the believer progress on his path of faith but above all damage those who attend Christian celebrations, and in particular, the Sunday Eucharist.
In the last few decades, some people have given too much importance to the pedagogical dimension of the liturgy and the desire to make the liturgy more accessible even for outsiders, and have undermined its primary function: the liturgy lets us immerse ourselves completely in the salvific action of God in His son Jesus, which makes it missionary.
Essentially turned towards God, it is beautiful when it permits all the beauty of the mystery of love and communion to manifest itself.(T. Verdon, Vedere il mistero. Il genio artistico della liturgia cattolica, Mondadori 2003)
The liturgy is beautiful when it is "acceptable to God" and immerses us in divine joy. ...
Liturgy is not what man does, but is a divine work.
The faithful need to be helped to perceive that the act of worship is not the fruit of activity, a product, a merit, a gain, but is the expression of a mystery, of something that cannot be entirely understood but that needs to be received rather than conceptualised.
It is an act entirely free from considerations of efficiency.
The attitude of the believer in the liturgy is marked by its capacity to receive, a condition of the progress of the spiritual life. This attitude is no longer spontaneous in a culture where rationalism seeks to direct everything, even our most intimate sentiments.
No less important is the promotion of sacred art to accompany aptly the celebration of the mysteries of the faith, to give beauty back to ecclesiastical buildings and liturgical objects.
In this way they will be welcoming, and above all able to convey the authentic meaning of Christian liturgy and encourage full participation of the faithful in the divine mysteries, following the wish often expressed during the Synod of Bishops on the Eucharist.
Certainly the churches must be aesthetically beautiful and well decorated, the liturgies accompanied by beautiful chants and good music, the celebrations dignified and preaching well prepared, but it is not this in itself which is the via pulchritudinis or that which changes us.
These are just conditions that facilitate the action of the grace of God.
Therefore the faithful need to be educated to pay attention not merely to the aesthetic dimension of the liturgy, however beautiful it may be, but also to understand that the Litrugy is a divine act that is not determined by an ambiance, a climate or even by rubrics, for it is the mystery of faith celebrated in Church."