The Mistress of Theology 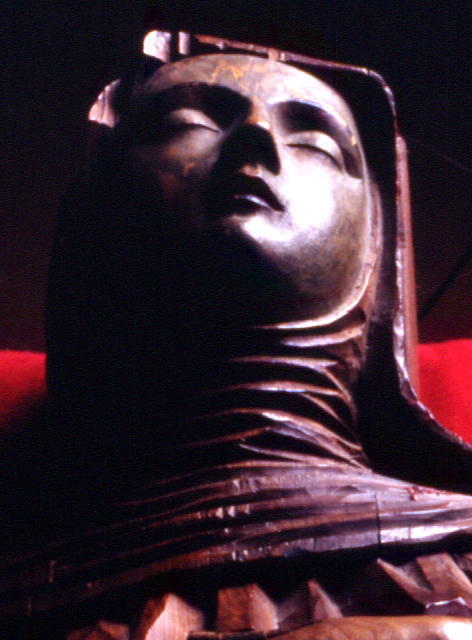 Blessed Angela of Foligno
This week on Wednesday past Pope Benedict XVI continued his catechesis on women medieval mystics with a talk on the life and works of the Blessed Angela of Foligno (1248 - 1309)
Of Blessed Angela, Bollandus quoted Maximilian Sandaeus, of the Society of Jesus, who called her the "Mistress of Theologians", whose whole doctrine has been drawn out of the Book of Life, Jesus Christ, Our Lord.
Her body lies within the Church of St Francis in Foligno and on 20th June 1993 Pope John Paul II visited Foligno and prayed before the urn which contains her remains. (see below) 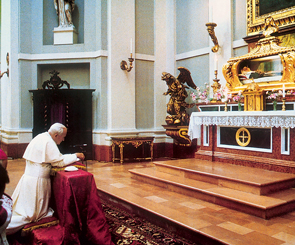 Pope John Paul II on 20 June 1993 before the Urn containing the remains of Blessed Angela of Foligno at the Basilica of San Francesco in Foligno
In his homily on 20th June 1993, Pope John Paul II said that she deserved the title "Mistress of Theology"
The homily which is an extended meditation on Blessed Angela is only in Italian on the Vatican website. One does wonder when they will finally get round to translating into English and other languages all the homilies and speeches at least of Pope John Paul II and the modern Popes.
Before her tomb that day he prayed to Blessed Angela. The prayer is on the Vatican website, again in Italian only.
He prayed:

In his discussion Pope Benedict XVI, recounted the conversion experiences of the Blessed Angela. One spark set her off on the journey but there were many steps after the initial setting off.

""Il Libro della beata Angela da Foligno" (The Book of Blessed Angela of Foligno), which gathers the documentation on our Blessed, recounts this conversion; it indicates the necessary means: penance, humility and tribulations; and narrates in passages, the succession of experiences of Angela, begun in 1285.
Recalling them, after having lived them, she sought to recount them through her friar confessor, who transcribed them faithfully, trying afterward to systematize them in stages, which he called "steps or changes," but without succeeding in ordering them fully (cf. "Il Libro della beata Angela da Foligno," Cinisello Balsamo, 1990, p. 51).
This is because the experience of union of Blessed Angela was a total involvement of the spiritual and corporal senses, and of what she "understands" during her ecstasies remained, so to speak, only a "shadow" in her mind.
"I really heard these words," she confesses after a mystical rapture, "but what I saw and understood, and that he [God] showed me, in no way do I know or am I able to say, though I will willingly reveal what I understood with the words that I heard, but it was an absolutely ineffable abyss." "

The initial step for Angela was the fear of sin, something that the Pope characterised as "a faith still poor in charity, namely, of love of God":

"We will now consider only some "steps" of the rich spiritual path of our blessed. The first, in reality, is an introduction: "It was the knowledge of sin," as she specifies, "following which the soul has great fear of being damned; in this step she wept bitterly" ("Il Libro della beata Angela da Foligno," p. 39).
This "fear" of hell responds to the type of faith that Angela had at the time of her "conversion"; a faith still poor in charity, namely, of love of God.
Repentance, fear of hell, and penance opened up to Angela the prospect of the sorrowful "way of the cross" that, from the eighth to the 15th step, would then lead her on the "way of love."
The friar confessor recounts: "The faithful one now said to me: I had this divine revelation: 'After the things that you have written, now write that whoever wants to preserve grace must not take the eyes of his soul off the Cross, whether in joy or in sadness, which I grant him and permit'" (Ibid., p. 143).
However, in this phase Angela still "does not feel love"; she affirms: "The soul feels shame and bitterness and does not yet experience love, but sorrow" (Ibid., p. 39), and is dissatisfied."

After this "initial stage", there were great trials and tribulations for Angela: occasions for further "purifications". One conversion experience does not justify the feeling that one is one of the "elect". For Blessed Angela it was only the first step on a long and arduous journey as she set her sights firmly on Christ on the Crucifix. The becoming a tertiary Franciscan was only a stage in the transition. More was required. Total commitment and a life of prayer. Until she was rewarded by an act of grace, undeserved and arising out of Love. The Pope stressed the importance of: penance, humility and tribulations. Especially in an age where there is a danger of living as if God did not exist. Stasis is not and never an option.
The Pope went on to say:

"In the third Instruction the blessed insists on this contemplation and affirms:

To be immersed, to be transformed in love and in the sufferings of Christ crucified, to be identified with him. Angela's conversion, begun with that confession of 1285, came to maturity only when God's forgiveness appeared to her soul as the free gift of love of the Father, source of love:

"There is no one who can give excuses," she affirms, "because each one can love God, ad He does not ask the soul other than that He wills it good, because He loves it and is its love" (ibid., p. 76).

In Angela's spiritual itinerary the passage from conversion to mystical experience, from what can be expressed to the inexpressible, happens through the crucifix. And the "suffering God-man," who becomes her "teacher of perfection."
Hence, all her mystical experience tends to a perfect "likeness" with him, through ever more profound and radical purifications and transformations. In such a stupendous enterprise Angela puts her whole self, soul and body, without sparing herself penances and tribulations from the beginning to the end, desiring to die with all the pains suffered by the God-man crucified to be transformed totally in him.

"O children of God," she recommended, "transform yourselves totally in the suffering God-man, who so loves you that he deigned to die for you the most ignominious and all together ineffably painful death and in the most painful and bitter way. This only for love of you, O man!" (ibid., p. 247).

This identification also means to live what Jesus lived: poverty, contempt, sorrow because, as she affirmed,

"through temporal poverty the soul will find eternal riches; through contempt and shame it will obtain supreme honor and very great glory; through a little penance, made with pain and sorrow, it will possess with infinite sweetness and consolation of the Supreme God, God eternal" (Ibid., p. 184).

From conversion to mystical union with Christ crucified, to the inexpressible. A very lofty way, whose secret is constant prayer;