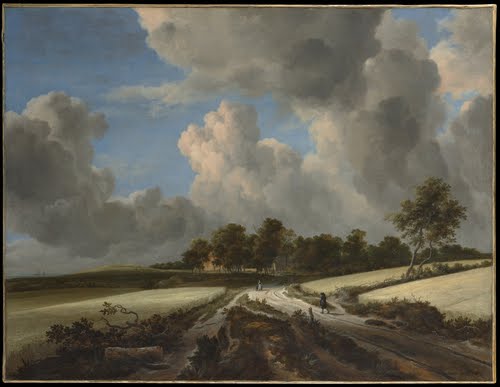 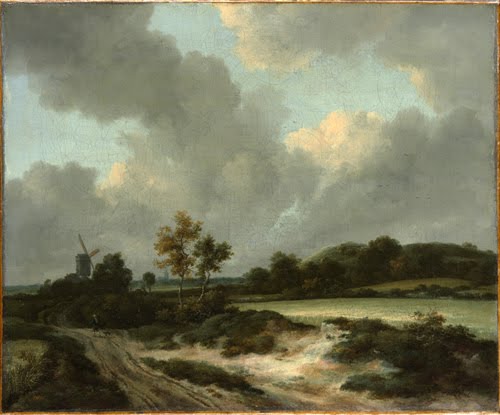 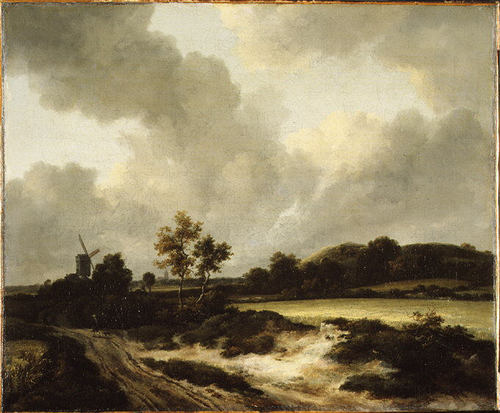 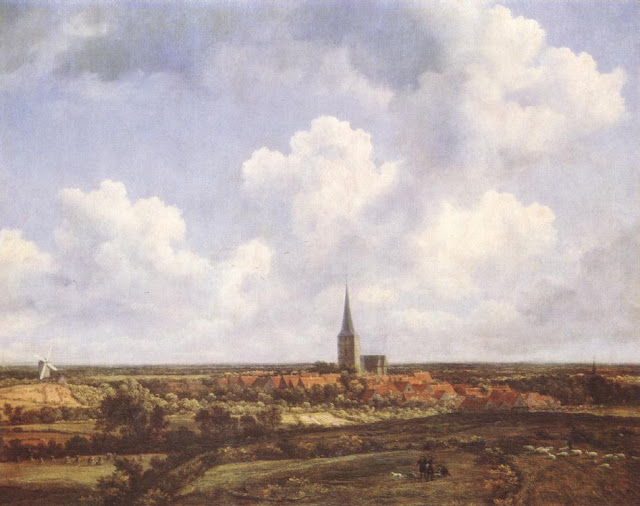 Landscape with Church and Village 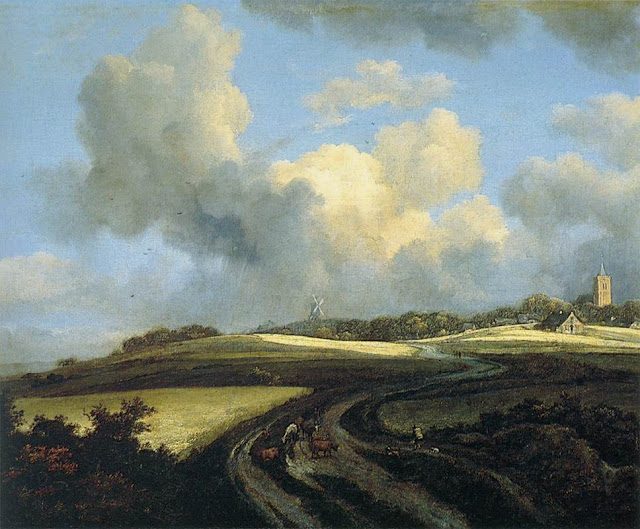 Road through Corn Fields near the Zuider Zee 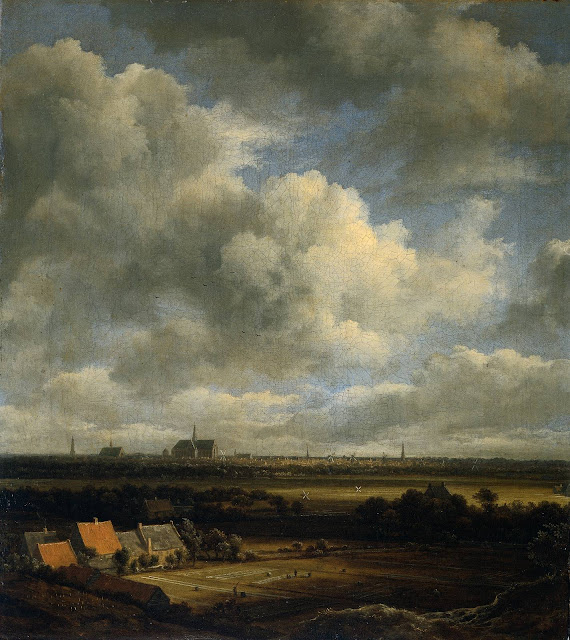 During his lifetime, van Ruisdael`s works were little appreciated, and he seems to have lived in poverty.

In 1681 the sect of the Mennonites, with whom he was connected, petitioned the council of Haarlem for his admission into the almshouse of the town, and there the artist died on the 14th of March 1682.

He is now ranked with Rembrandt and Vermeer as one of the great masters of seventeenth-century Dutch painting,

Goethe praised him as a poet among painters.

Landscape and seascape was his forte. He was a major innovator in the field of 17th-century Netherlandish landscape painting. He achieved an impressive control of light effects, composition and accentuation of bold, compact forms in a rich scala of vivid ochre, brown and green colours

His landscapes and seascapes are not based on reality. They are more poetic, imposing and dramatic than reality.

The above are not examples of his masterpieces. They can be viewed on the normal art sites.

He had certain things which he loved to paint: trees, water, rivers.

He also liked grainfields. He produced the subject frequently. Unlike Van Gogh`s wheatfields, there is a melancholic air in these depictions.

On the anniversary of the election of Pope John Paul II to the Papacy in 1978, one recalls the many sermons and talks of the late Pope. One of his favourite themes seems to be based on the following parable of the wheat grain:

"Unless a grain of wheat falls into the earth and dies, it remains alone; but if it dies, it bears much fruit” (Jn 12:24).

In a post-industrial society where people live in and work in built up metropolises far from the countryside, agriculture has become "agribusiness", people`s connection with the land is tenuous to say the least, and food of all types (from home producers but increasingly abroad) is a processed commodity purchased at huge supermarket outlets whenever we wish, the impact of such comparisons may be diminished somewhat.

When was the last time you saw a grain of wheat or corn ?

How many people can marvel at the almost miraculous process of germination if they have even considered it ?

Consider that even in the nineteenth century, many people in Britain were still tied to the land despite the Industrial Revolution. Food and in particular the corn supply could cause huge political and social upheaval.

Consider the repeal of the Corn Laws in the United Kingdom in the 1840s. Consider the failure of the potato crop in Ireland on or around that time. More recent examples include the rationing of food in Europe in the Second World War. However the memory of such shortages has thankfully faded if not gone.

In the West, the threat of famine has now disappeared provided you can pay the price. We have a superabundance of food of all kinds and qualities. It is of course a great advance which has allowed great and substantial progress and advances in other fields.

But there are always downsides to every great advance.

Perhaps such works of Jacob van Ruisdael remind us of a time when we were not so fortunate. They perhaps help us in the West to again appreciate such parables.

Perhaps today Africa is one of the few places where such parables resonate with such tremendous force.

Here is an extract from one of Pope John Paul`s homilies: at Uhuru Park - Nairobi (Kenya) on Sunday, 18 August 1985 at the occasion of 43rd International Congress of the Eucharist:

""Unless a grain of wheat falls on the ground and dies, it remains only a single grain; but if it dies, it yields a rich harvest” (John. 12, 24). Dear Brothers and Sisters in Christ; beloved Pilgrims from all the continents of the world,

1. These words were spoken by the Lord Jesus as he thought of his own death. He himself first of all is that “grain of wheat” which “falls on the ground and dies”. The Son of God, of the same substance as the Father, God from God and Light from Light, was made man. He entered into the life of ordinary men and women as the son of the Virgin Mary of Nazareth. And finally he accepted death on the Cross as the sacrifice for the sins of the world. Precisely in this way the grain of wheat dies and yields a rich harvest. It is the harvest of the Redemption of the world, the harvest of the salvation of souls, the power of truth and love as the beginning of eternal life in God.

In this way the parable of the grain of wheat helps us to understand the very mystery of Christ.

2. At the same time, the grain of wheat that “falls on the ground and dies” becomes the pledge of bread. A man harvests from his fields the heads of grain which have grown from the single grain and, transforming the collected grains into flour, he makes bread from it as food for his own body. In this way Christ’s parable about the grain of wheat helps us to understand the mystery of the Eucharist.

In fact, at the Last Supper, Christ took bread in his own hands, blessed it and said these words over it: “Take this, all of you, and eat it: this is my body which will be given up for you”. And the broken Bread which had become in a sacramental way his own Body he distributed to the Apostles.

In a similar way he brought about the transubstantiation of the wine into his own Blood, and distributing it to the Apostles, said: “Take this, all of you, and drink from it: this is the cup of my blood, the blood of the new and everlasting covenant. It will be shed for you and for all men so that sins may be forgiven”. And then he added: “Do this in memory of me”.

3. This is how the mystery of Christ remains among us through the Sacrament of the Eucharist. The mystery of the Redeemer of the world who gave himself up for us all, offering his Body and Blood in the Sacrifice of the Cross. Thanks to the Eucharist the words of our Redeemer are fulfilled: “I will not leave you orphans; I will come back to you” (John. 14, 18).

In this Sacrament he is always coming to us. We are not orphans. He is with us!

In the Eucharist he also brings us his peace, and he helps us to overcome our weaknesses and fears. It is just as he had foretold: “Peace I bequeath to you, my own peace I give you, a peace the world cannot give, this is my gift to you. Do not let your hearts be troubled or afraid” (John. 14, 27).

And hence, from the beginning, the disciples and witnesses of our Crucified and Risen Lord “remained faithful to the teaching of the apostles, to the brotherhood, to the breaking of bread and to the prayers” (Act. 2, 42).

Thus it was at the beginning in Jerusalem. Thus it has been everywhere, wherever faith in the Gospel together with the teaching of the Apostles has been introduced. From generation to generation it has been so among different peoples and nations. Thus it has also been on the African continent since the Gospel first reached these lands through the missionaries, and since it produced its first fruits in a community assembled to celebrate the Eucharist. "