Purgatory before the Reformation 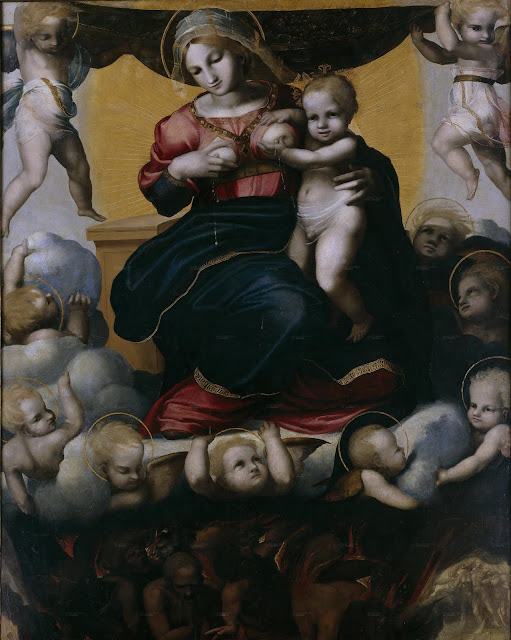 Born in Toledo, Machuco is said to have been a pupil or friends with Michelangelo and Pontormo. He is also said to have stayed at Raphael's workshop beginning in 1515-1516

Returning to Spain in 1520, he worked as a painter in the Royal Chapel in Granada, as well as in Jaén, Toledo, and Uclés

His reputation rests on the fact that he was the architect of the Palace of Charles V in the grounds of the Alhambra in Granada, begun in 1527

The Virgin with the Souls of Purgatory was painted in Italy . It is the earliest recorded painting of Machuco

It is a thoroughly Mannerist work in the style of Raphael

James Francis Cardinal Stafford Major Penitentiary of the Vatican at Torquay, England on May 14, 2005 in a wide ranging speech on many issues touched on the Medieval ideas of pardon and reconcliation:

"The layman, Dante, describes the understanding of the high Medieval Church.

In the final cantos of the Purgatorio, those who desire to be raised to Paradise must first be cleansed of remaining sins by daunting passages through the two rivers flowing from the summit of Mt. Purgatory: the river of forgetfulness (the Lethe) and the river of positive remembrance (the Eunoe).

Dante expressed the best of the Catholic penitential tradition when writing of these double waters: the first, the experience of the forgetting of sin by the sinner; the second, the forgiveness of past sinful events through the ecclesial acceptance by the sinner of God's mercy in the expiatory death of Christ.

Passage through both rivers is necessary for forgiveness. Simply to forget past sins is not enough. The uniquely Christian element in this process, articulated in the coinage of new words with their unheard of prefixes - forgive, perdonare, vergeben, perdonnar, etc. The emphatic, never-seen-before prefixes, pre- for-, emphasize the divine gift to the undeserving.

Embodied, concrete acts by the penitent are necessary for God's such forgiveness. God finally transforms the sinner by the sinner's specific, active acceptance of the divine mercy when performing satisfaction for sin. The penitent is then blessed by the remembrance of that divine transformation together with his or her participation in it."