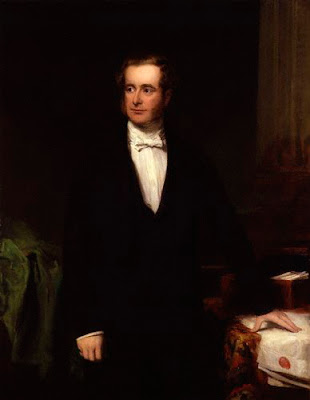 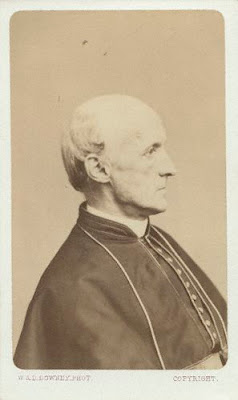 Henry Pelham Pelham-Clinton, 5th Duke of Newcastle-under-Lyne KG, PC (22 May 1811–18 October 1864), styled Earl of Lincoln before 1851, was a British politician. He held various high offices of state including Secretary of State for War

Manning was ordained into the Church of England in 1832, but resigned his post in 1850. He entered the Roman Catholic Church the following year and became Archbishop of Westminster, and titular head of English Catholicism, in 1865. He was made a cardinal in 1875.

In answer to a letter of Manning's announcing his conversion, the Duke of Newcastle wrote to him as follows :

Preparation for the last blow of sorrow does not, as I have long since learnt, diminish the severity of it when it really comes, and though your last most amiable letter to me left me no hope your announcement that you no longer belong to the Anglican Church has filled me with grief such as no similar event has ever occasioned to me before.

You say that your chief trial now is the loss of friends dear to you, and the sorrow you give them. Of the latter I cannot, and (from my heart and conscience I say it) I would not if I could, relieve you, but in me at least you will find no loss of friendship.

I mourn over what I must think the great error of a pure and noble mind seeking the true light, but I cannot cease to love and admire the man who makes the sacrifices which I know you have, in obedience to what he believes to be right. I shall ever cherish the recollections of the past I shall think of what is now the present with sorrow too deep to be mixed with bitterness or sectarian heat, and for the future I pray God that you may not be changed as others have, and that you may carry into the Church which has received you that spirit of pure, Christian, universal love and charity, which has made you one of the brightest ornaments of that which has lost you.

Certain I am, there are many attached friends who will still cling to their love and respect for you I dare not contemplate the day when a difference of faith may dissipate those feelings which you now bear towards them.

Alas ! I fear you little know what thorns your secession from amongst us will strew in the paths of those who have hitherto laboured with you, or the impulse you will give to that spirit of Puritan hatred which is fast reviving in the land but all this I must not expect you to care for now I have always feared your aspirations for " Christian Unity" were too Utopian, but at any rate I cannot doubt that the conversion of two such men as yourself and James Hope must make more hopeless than ever so blessed an event.

May God ever bless you, my dear friend ; and may we, though now pursuing different paths, meet in that day when the truth shall be revealed to us all. Believe me, ever affectionately and truly yours,

Forgive me if I address my letter as heretofore. Believe me I do not do so inconsiderately, much less unkindly. "

Some have criticised the response of the Archbishop of Canterbury to the new of the Vatican announcement of the special arrangements for members of the Anglican Church to be received into a form of association with the Catholic Church. However  the Archbishop of Canterbury`s response can only be described as truly noble, statesmanlike, civilised and quintissentially Christian.