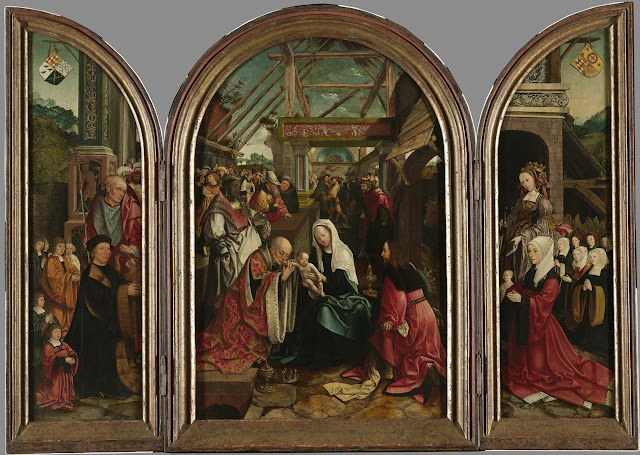 Triptych of the Adoration of the Magi

Jacob Cornelisz. van Oostsanen mainly received commissions to paint religious scenes on panels and church domes. But he also painted secular works, and besides painting, he was known for his wood carvings too

The central panel of the triptych above is the Adoration of the Magi.

On the inner left wing are St Jerome, the donor and his six sons.

On the inner right wing are St Catherine of Alexandria together with the donor`s wife and her seven daughters.

The Dutch family are seen venerating the Holy Family shortly after the birth of the Messiah.

Note that one of the sons and one of the daughters are wearing shrouds.

Despite the fact that in those days, child mortality was greater and more common than today, it was still as painful.

In its original position in the church, it was closed for most of the year. All that could be seen were the two grisailles of Sts Christopher and Anthony on the backs of the shutters. They are hidden from sight in the present, open arrangement. Back in the 16th century, the triptych was only exhibited on major feast days such as 6 January, the feast of the Epiphany.

It is a private memorial: a painted in memoriam for the donors and their children, including those who had already died at the time of the painting. Several of the latter have identical faces, so it is likely that they died very young. As regards the children who died, they are still shown as part of the family. In the same way the Church is the Church of the living and the dead. Their attention is centred on the Incarnation.

The donor`s family cannot now be identified with any certainty. Their names and the identities of the children are known now only to God.

For some reason the painting was moved from a Dutch church possibly at and because of the Reformation. In 1792, for some unknown reason it ended up in a Franciscan friary near Messiera.

That is one form of In Memoriam which derives from before the Reformation. It depicts a belief in death, salvation and the Saints which is Catholic but come the Reformation was swept away in many parts of Europe

Compare and contrast that vision with that in In Memoriam A.H.H., the poem by the English poet Alfred, Lord Tennyson, completed in 1849.

"A.H.H." was the poet's Cambridge friend Arthur Henry Hallam, who died suddenly of a cerebral hemorrhage in Vienna in 1833

The poem was a great favourite of Queen Victoria. She found solace in it after the death of Prince Albert in 1861. She said, "Next to the Bible, In Memoriam is my comfort."

It is a meditation on the search for hope after great loss. It touches upon many of the most important and deeply-felt concerns of Victorian society.

It moves from grief and pain to recognition of immortality. The consolation is Christian not Platonic.

It concerns grief at the loss of a young person with his whole life, filled with great promise, ahead of him. It is a sudden and unexpected death. Tennyson considers the feeling of the gulf between the living and the dead, between the bereaved and the deceased. The pain is not only mental but physical.

One major themes of the poem is the the consideration of the question: how is the Immortality of the Soul to be found when "Nature, red in tooth and claw" is "so careless of the single life" ? How can he trust that Love is "Creation`s final law" when recent scientific discoveries (e.g. discovery of fossils, evolution) had seemingly cut the ground from received belief ? What hope is there for Hallam`s "single life" ?

The resolution is a vision of Hallam living in God.

"By night we linger'd on the lawn,
For underfoot the herb was dry;
And genial warmth; and o'er the sky
The silvery haze of summer drawn;


And calm that let the tapers burn
Unwavering: not a cricket chirr'd:
The brook alone far-off was heard,
And on the board the fluttering urn:


And bats went round in fragrant skies,
And wheel'd or lit the filmy shapes
That haunt the dusk, with ermine capes
And woolly breasts and beaded eyes;


While now we sang old songs that peal'd
From knoll to knoll, where, couch'd at ease,
The white kine glimmer'd, and the trees
Laid their dark arms about the field.


But when those others, one by one,
Withdrew themselves from me and night,
And in the house light after light
Went out, and I was all alone,


A hunger seized my heart; I read
Of that glad year which once had been,
In those fall'n leaves which kept their green,
The noble letters of the dead:


And strangely on the silence broke
The silent-speaking words, and strange
Was love's dumb cry defying change
To test his worth; and strangely spoke


The faith, the vigour, bold to dwell
On doubts that drive the coward back,
And keen thro' wordy snares to track
Suggestion to her inmost cell.


So word by word, and line by line,
The dead man touch'd me from the past,
And all at once it seem'd at last
The living soul was flash'd on mine,


And mine in this was wound, and whirl'd
About empyreal heights of thought,
And came on that which is, and caught
The deep pulsations of the world,


Æonian music measuring out
The steps of Time—the shocks of Chance—
The blows of Death. At length my trance
Was cancell'd, stricken thro' with doubt.


Vague words! but ah, how hard to frame
In matter-moulded forms of speech,
Or ev'n for intellect to reach
Thro' memory that which I became:


Till now the doubtful dusk reveal'd
The knolls once more where, couch'd at ease,
The white kine glimmer'd, and the trees
Laid their dark arms about the field:


And suck'd from out the distant gloom
A breeze began to tremble o'er
The large leaves of the sycamore,
And fluctuate all the still perfume,


And gathering freshlier overhead,
Rock'd the full-foliaged elms, and swung
The heavy-folded rose, and flung
The lilies to and fro, and said


"The dawn, the dawn," and died away;
And East and West, without a breath,
Mixt their dim lights, like life and death,
To broaden into boundless day. "


"You say, but with no touch of scorn,
Sweet-hearted, you, whose light-blue eyes
Are tender over drowning flies,
You tell me, doubt is Devil-born.


I know not: one indeed I knew
In many a subtle question versed,
Who touch'd a jarring lyre at first,
But ever strove to make it true:


Perplext in faith, but pure in deeds,
At last he beat his music out.
There lives more faith in honest doubt,
Believe me, than in half the creeds.


He fought his doubts and gather'd strength,
He would not make his judgment blind,
He faced the spectres of the mind
And laid them: thus he came at length


To find a stronger faith his own;
And Power was with him in the night,
Which makes the darkness and the light,
And dwells not in the light alone,


But in the darkness and the cloud,
As over Sinaï's peaks of old,
While Israel made their gods of gold,
Altho' the trumpet blew so loud. "