The Life of St Teresa of Avila 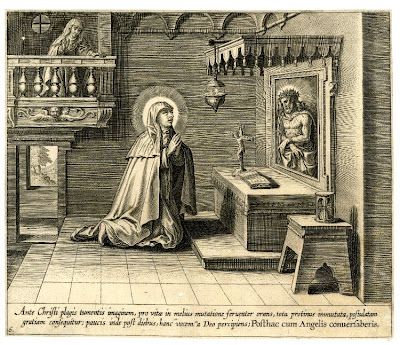 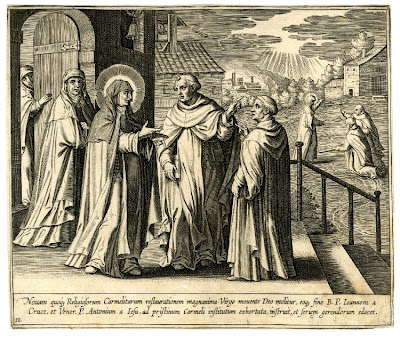 Print made by Adriaen Collaert (1560-1618) and Cornelis I Galle (1576-1650)
After Pieter de Jode I (?) (1570-1634)
Plate 18 of The Life of St Teresa of Avila: John a Crucis and Antonius a Jesu at the convent. St Teresa at left and conversing with St John of the Cross and Antony of Jesus standing at centre, two nuns behind St Teresa, the two men with St Teresa in the background at right; unsigned. 1613
Engraving
183 millimetres (trimmed) x 218 millimetres
The British Museum, London

The Life and the teachings of St Teresa of Avila were not confined to literature. Art helped to spread the message of her Life and work.

The above are two of a series of twenty-five plates showing the life of St Teresa of Avila, dedicated to Roderico Lasso Nino, the head-chamberlain of Archduke Albert of Austria. they were first published at Antwerp, part of The Spanish Netherlands

These plates were published by Adriaen Collaert and Cornelis Galle in 1613 (first edition) and then later republished between 1622 and 1677.

This series of plates was extremely influential in the spread and depiction of the veneration accorded to St Teresa of Avila all over the Spanish Americas. For example, the series served as the basis of a series of sixteen paintings executed by José Espinoza de los Monteros in 1682. These paintings hang now in the Church of the Carmelite Convent in Cuzco, Peru.

The series served as the basis for two series of paintings on the life of the Saint currently in the Convento del Carmen San José (Carmen Alto) in Santiago, Chile. They are known as the Large Series and the Short Series on the Life of Saint Teresa. Both series were produced by an unknown member of the Cuzco School of painting. who was a follower of José Espinoza de los Monteros. The Large Series was produced around 1690 and the Small Series around 1694. See below. 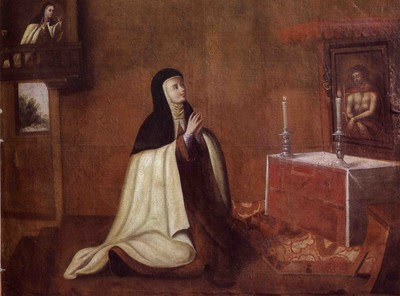 But by the very nature of the paintings which are narratives or still portraits, the artists cannot convey but a part of what is within the Life and her teachings. She is too big for the canvas. Paintings and artistic depictions cannot fully convey the style and character of the woman, the excitement, passion and verve with which she speaks to and holds her reader.

In her Life she speaks to us from down the centuries with a profundity, freshness and a directness which hold our attention. The Life is her. Energetic, joyful, prayerful, devout, filled with wisdom, totally self-aware and mindful of her limitations, filled with humility but not servile, mystical but filled with the utmost commonsense and utterly grounded in reality, a romantic rebel against what she saw were the failings about her but always obedient, strong willed and passionate but only in the furtherance of her vision and her noble cause. It is the portrait of a noble Soul.

As the then Archbishop of Westminster, Henry E Manning wrote in his Preface to the Life of St Teresa in 1865 (mentioned in the post  two below):

"[T]he five degrees of the knowledge of God, ... are illustrated in a luminous distinctness in the life of S. Teresa, namely the knowledge of faith, of love, of experience, of infusion, and of intuition, or of vision. And it is this knowledge of God which expanded and ennobled her soul to a capacity of the Divine Presence hardly to be surpassed in the examples of the Saints.

And with this one axiom of the spiritual life and of S. Teresa `s theology, that the knowledge of God is the nobility of the soul, I commend this book, beautiful and simple both in its thoughts and in its expressions, to the devout reading and the meditation of all who desire to know and to love God."