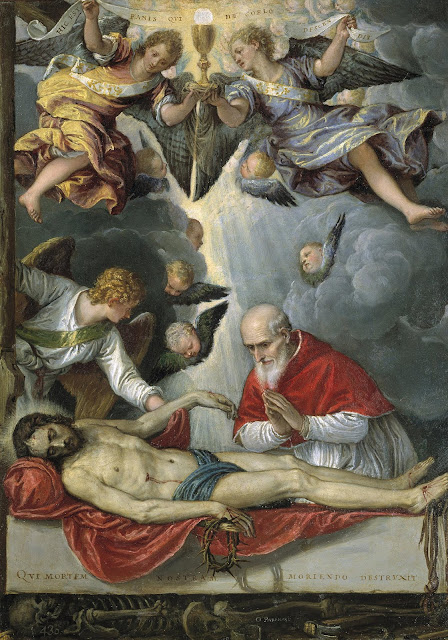 I have put in this picture simply because in painting Saint Pope Pius V always seemed to get a raw deal.

This picture came into the possession of the Monasterio de El Escorial during the reign of King Philip II of Spain (1556-1598).

The main theme is the exaltation of the Eucharist. By dying, Christ destroyed Death through his Resurrection. Note the human skeleton at the bottom of the picture: the grave of Adam. This is a reference to the redemption from Original Sin.

Parrasio Micheli (or Michieli) was Titian's pupil who later followed the style of Paolo Veronese.

The composition derived from a sketch by Veronese.

The artist used this composition again for an altarpiece in the Venetian church of St Joseph. However where there is the Pope he substituted a self-portrait.