St Teresa of Avila in English 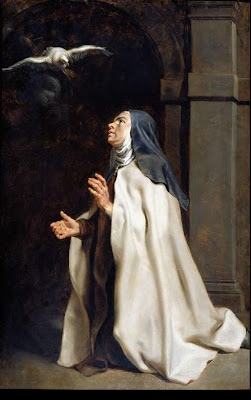 
As a Carmelite, one of the great influences on St Thérèse of Lisieux was St Teresa of Avila

St Teresa of Avila`s works were widely published and distributed around Europe. Her influence in Europe and where the Continental states had empires was immense.

St Teresa of Avila began to write The Interior Castle on June 2, 1577, Trinity Sunday, during a particularly painful and trying period of her life, and in less than six months had completed her masterpiece on prayer.

Soon after her death in 1582, numerous copies of The Interior Castle were widely distributed. Publication in Spanish began in 1588 just six years after her death.

It spread throughout Spain and then throughout the rest of Europe in translation.

But as regards an English translation, that is another story. It has to be borne in mind that St Teresa of Avila is one of the great figures of the Catholic Counter-Reformation.

The first known English translation was in 1611, published by Henry Jaye in Antwerp. Its full title was The lyf of the mother Teresa of Iesus, foundresse of the monasteries of the descalced or bare-footed Carmelite nunnes and fryers of the first rule. Written by her self, at the commaundement of her ghostly father, and now translated into English out of Spanish. By W.M. of the Society of Iesus. Very profitable for all vertuous and deuout people, and for all those that are desyrous to be such, or at least do not obstinately depriue themselues os so great a benefit.

However this would have had to have been smuggled into England because of the Catholic persecution at the time.

It is clear from contemporary sources at the time that in England there was a great shortage of all types of devotional literature for Catholics in England.

It is only from the Continent that the effect of St Teresa of Avila at this time on English literature can be seen.

An underground or samizdat translation of The Autobiography was published by Tobie Matthew in his preface to his 1642 translation of Saint Teresa’s life.

The Life is also to be found in English in the Works of the Holy Mother St. Teresa of Jesus (third part). It was printed in the year 1675, pp. 137-286 (during the Restoration of King Charles II after the Protectorate). It bears the title: The Interiour Castle: or, Mansions. It was by Abraham Woodhead and another, whose name is not known

It appears that it was only in the nineteenth century that a proper English translation was produced and published. This was in 1852. It was by the Rev. John Dalton, and was repeatedly reprinted. It was dedicated to Bishop Ullathorne. It was extremely popular.

It would appear that it was only after 1852 that St Teresa and her thought became well known to English speaking readers. They were already well known to Spanish, Italian, Polish, German, Portuguese and French speakers.

One of the first effects was on George Eliot, who cast Teresa as patron saint of the frustrated bluestocking Dorothea Brooke in Middlemarch. The Prelude to the novel is about the saint.

“Who that cares much to know the history of man, and how the mysterious mixture behaves under the varying experiments of Time, has not dwelt, at least briefly, on the life of Saint Theresa, has not smiled with some gentleness at the thought of the little girl walking forth one morning hand-in-hand with her still smaller brother, to go and seek martyrdom in the country of the Moors? Out they toddled from rugged Avila, wide-eyed and helpless-looking as two fawns, but with human hearts, already beating to a national idea; until domestic reality met them in the shape of uncles, and turned them back from their great resolve. That child-pilgrimage was a fit beginning. Theresa's passionate, ideal nature demanded an epic life: what were many-volumed romances of chivalry and the social conquests of a brilliant girl to her? Her flame quickly burned up that light fuel; and, fed from within, soared after some illimitable satisfaction, some object which would never justify weariness, which would reconcile self-despair with the rapturous consciousness of life beyond self. She found her epos in the reform of a religious order.

That Spanish woman who lived three hundred years ago, was certainly not the last of her kind ...

Here and there is born a Saint Theresa, foundress of nothing, whose loving heart-beats and sobs after an unattained goodness tremble off and are dispersed among hindrances, instead of centring in some long-recognisable deed”