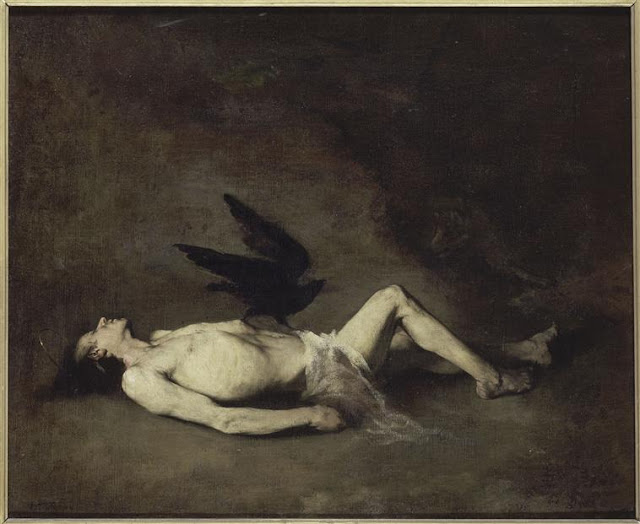 Augustin Théodule Ribot
(1823-1891)
Saint Vincent
Oil on canvas
Musée des Beaux-Arts, Château at Blois
St Vincent of Saragossa, Deacon and Martyr died on c. 304 during the persecutions of the Roman Emperor Diocletian
He was imprisoned and tortured on the grid iron and martyred at Valencia, Spain.
According to legend, ravens protected his remains from the wild beasts until his followers could recover the body and give him a proper burial.
Ribot was largely self taught; his only formal training was as a pupil in the studio of August Barthelemy Glaize. He began painting seriously in the late 1850s, often working at night by lamp light. It is thought these circumstances influenced his style, which is characterised by strong chiarscuro effects.
The work has similar qualities to the Louvre St Sebastian by Ribot, which was purchased by the French State in 1865
Ribot was very much influenced by the 17th century Spanish Baroque artist Jusepe de Ribera 1591 - 1652 who incidentally was born in Valencia.
"Ribot -Ribera" very quickly became a refrain.
Each new exhibition justified the comparison and made more explicit Ribot`s debt to his elder, since both the subject matter and the use of colour brought them together.
Here is Ribot`s ceebrated work, Saint Sebastian Martyr presently in the Musée d'Orsay, Paris 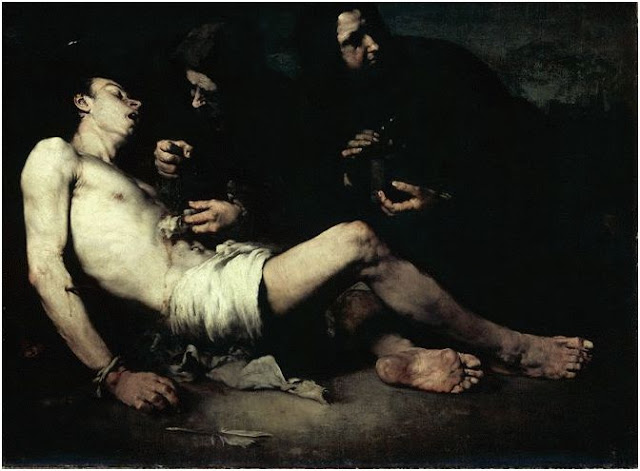