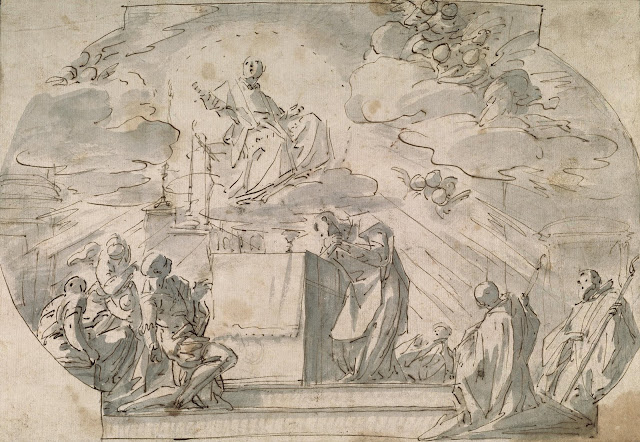 Luis González Velázquez 1715-1763
Aparición de San Francisco de Sales a San Claudio Croeix (o a San Juan Bautista Gord)
Appearance of St Francis de Sales to St Claud Croeix (or to St John the Baptist Gord)
Pen and wash on paper
182 mm x 265 mm
Museo Nacional del Prado, Madrid
Luis was not the Velázquez. He was one of the family of artists called Velázquez. He was the son of Pablo González Velázquez (1664-1727), an Andalusian sculptor who worked in the Baroque style and in 1702 settled in Madrid. His brother was Alejandro González Velázquez with whom he collaborated
St Francis de Sales was Bishop of Geneva (1602) and spiritual director and, with St Jane Frances de Chantal, the founder of Salesian spirituality. He took as his exemplar, St Charles Borromeo
He was beatified in 1661 by Pope Alexander VII, who then canonised him three years later.
He was declared a Doctor of the Church by Blessed Pius IX in 1877
In 1923, Pope Pius XI proclaimed him a patron of writers and journalists, because of the books he wrote, the most famous of which was Introduction à la vie dévote ("Introduction to the Devout Life").
He also left the mystical Traité de l' Amour de Dieu ("Treatise on the Love of God") and many highly valued letters of spiritual direction
But it is not only in the Catholic Church that he is venerated. He is recognised as an exemplary in the Church of England, where his memoria is also observed on January 24, and in the Church in Wales
He has always been highly regarded by the Popes who occupied the Papacy
The Apostolic Letter of Blessed Pius IX declaring him a Doctor of the Church is worth reading. See Dives In Misericordia Deus (pdf)(Proclaiming St. Francis de Sales a "Doctor of the Church) November 16, 1877 [Apostolic letter]
Benedict XV wanted to write an Encyclical on him but died before he could do it.
There was however an Encyclial by Pius XI extolling the saint and doctor: See Pius XI, Rerum Omnium Perturbationem (26/01/1923)
In his short Pontificate Pope John Paul I was apt to quote and cite him in his public allocutions.
Here is some of the wisdom of St Francis of Sales:

"There is no vocation that does not have its troubles, its vexations, its disgust. Apart from those who are fully resigned to God's will. each of us would like to change his own condition with that of others. Those who are bishops wish they were not; those who are married wish they were not, and those who are not married wish that they were. Where does this general restlessness of spirits come from, if not from a certain allergy that we have towards constraint and from a spirit that is not good, which make us suppose that others are better off than we are?" (St Francis of Sales, Oeuvres, edit. Annecy, t. XII, 348-9).

"God will work with you, in you and for you, and your work will be followed by consolation" (The Introduction to the Devout Life, III, 10).

"Charity is a love of friendship, a friendship of preference, a preferential love, but an incomparable preference, sovereign and supernatural, that is as a sun in the soul to enlighten it with its rays, in all the spiritual faculties to perfect them, in all one's powers to moderate them, but in the will, as on its seat, to dwell there and to make it cherish and love its God above all things" (cf. Treatise of the Love of God, Book II, chap. 22, p. 125, translated by H.B. Mackey, Newman Book Shop, Westminster, Md., 1945).

"Perfect abandonment into the hands of the heavenly Father and a perfect indifference as to what the divine will decides are the quintessence of the spiritual life.... All the setbacks in our perfection come only from the lack of abandonment, and it is certainly true that it is right to begin, to continue and to finish the spiritual life right there, in imitation of our Saviour who did this with an extraordinary perfection in the beginning, during and at the end of his life" (Sermon pour le Vendredi Saint, 1622: Oeuvres complètes, X, p. 389).

"Many are satisfied with carrying the Lord on their tongue, recounting His marvels and praising Him with great ardour; others carry Him in their hearts with tender and loving affection, which becomes part and parcel of their lives, thinking of Him and speaking to Him. But these two ways of carrying the Lord do not amount to much if the third element of carrying Him in their arms by good works is missing." (Sermons 2; O. IX, p. 22)

"Do not get all worked up about the future disasters of this world, which may never occur anyway; when and if they do occur, God will give you the strength to bear them. Jesus commanded Saint Peter to walk on the water, but Peter, frightened by a gust of wind and the storm, almost drowned. Then he pleaded with the Lord, Who said to him, "What little faith you have ... why did you falter?" And putting forth His hand He saved him. [cf. Mt. 14:31] If God asks you to walk on the turbulent waters of adversity, do not doubt, do not fear, because God is with you. Have courage and you will be safe." (Letters 1420; O. XVII, p. 211)