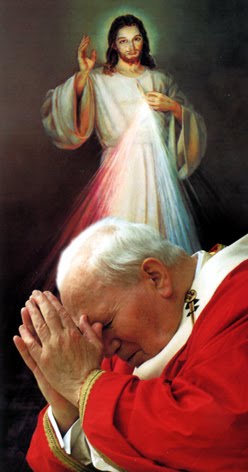 A communiqué from the Congregation for Saints' Causes announced that today the Pope, in an audience with the congregation's prefect, Cardinal Angelo Amato, "authorized the dicastery to promulgate the decree of the miracle attributed to the intercession of Venerable Servant of God John Paul II (Karol Wojtyla)."
This was the final step in the process preceding the beatification rite, which will be celebrated on Divine Mercy Sunday, a feast day instituted by John Paul II
He died on the night of Saturday, April 2, 2005, precisely the vigil of the Second Sunday of Easter was celebrated, and many observed the unique coincidence, which brought together a Marian dimension -- the first Saturday of the month -- and that of Divine Mercy
Posted by Unknown at 10:20 pm