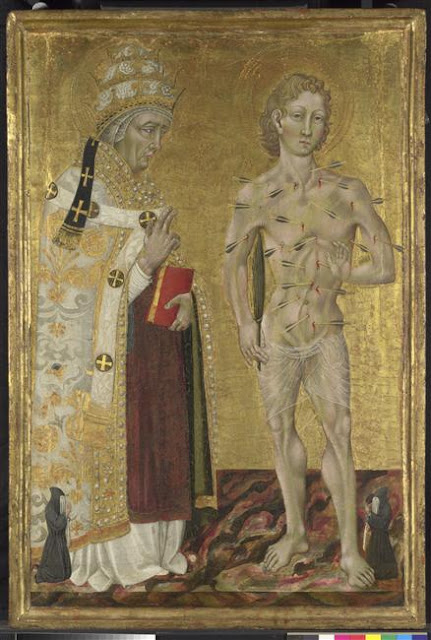 Giovanni di Paolo di Grazia (1403 – 1482)
Saints Fabian and Sebastian
about 1475
Egg tempera on wood
84.5 x 54.5 cm
The National Gallery, London
This week celebrates the Feasts of St Fabian, Pope and Martyr (Pope from January 10, 236 to January 20, 250) as well as St Sebastian, martyr.(died c. 288)
They are linked in this Votive offering now in The National Gallery, London
S.Fabian on the left holds a book, S.Sebastian on the right holds a dark green palm. At the foot of the panel are two smaller figures, brothers of the Misericordia, probably the donors or commissioners of the work. The Confraternity was a lay brotherhood which was devoted to the Seven Works of Mercy. The brothers, dressed in black with white veils, are holding what may be spoons used for collecting alms
Saints Sebastian and Fabian are linked and seen in other works together. See the works in The Hermitage, Saint Petersburg
However beyond sharing the same "birthday" in the Calendar, there would appear to be no other link between the two. If you do know of such a link I would be interested to know
Their names have been linked together since the Calendar of Filocalus of 354
Giovanni di Paolo was an independent artist who thrived in fifteenth century Siena.
His training included contact with Lombard and French-Flemish artists
As well as miniatures, he painted narrative altarpieces and portraits. After his death his reputation declined. However in the Twentieth century there was revived interest and appreciation in his works
Of him John Pope-Hennessy in "Giovanni di Paolo." Bulletin of the Metropolitan Museum of Art 46, no. 2 (1988) said:

"As he developed, his style inevitably changed... but his imagery remained constant and his work from the first to last possesses a highly individual imaginative quality. He relives the scenes he represents with such intensity that we see them through his mind and with his eyes."