The Major Elevation of the Host 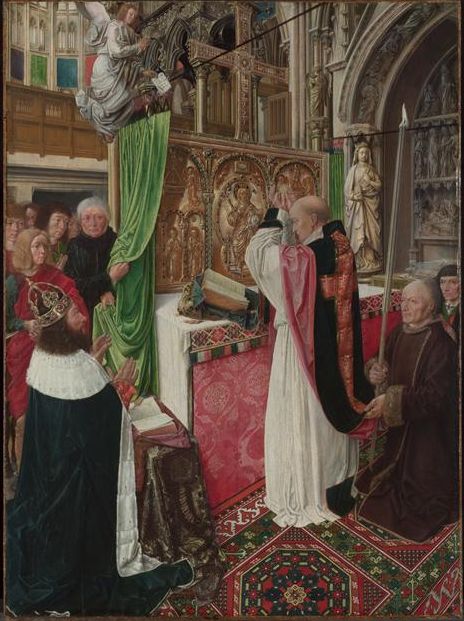 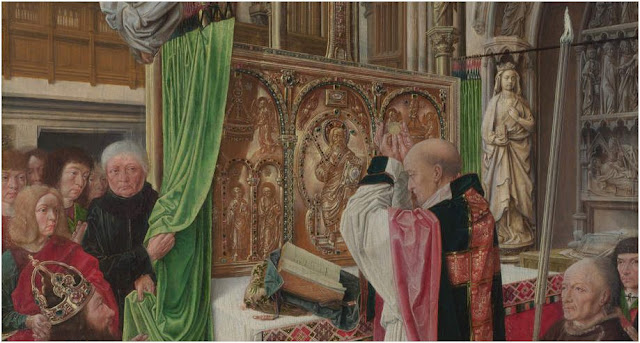 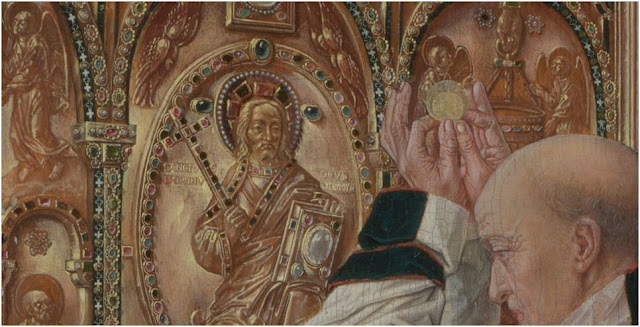 Maître de Saint Gilles (active 1490 - 1520)
The Mass of Saint Giles, c 1500
Oil on panel
61.6 x 45.7 cm
The National Gallery, London
The panel depicts a miracle.
The panel was set before the high altar of the Abbey of Saint-Denis near Paris. Many of the objects shown can be proved to have existed in the church. This is the only surviving representation of the church as it was in about 1500.
The mirace depicted is that of Charles Martel (?) (kneeling left) who could not bring himself to confess a sin. He asked Saint Giles to pray for him.
While Giles was celebrating Mass, an angel placed on the altar a paper on which was written the king's sin and his pardon, dependent on his repentance.
The incident is said to have taken place in Orléans in 719. In some forms of the legend Charlemagne replaces Martel.
The central image of the panel is the Major Elevation of the Host by the priest during the Mass.
The word "Host" is derived from the Latin hostia meaning "sacrificial victim"
After consecration, there are two elevations: one of the Host then the Chalice. In the concluding doxology there is another elevation of both Host and Chalice.
The elevation of the Host and the elevation of the Chalice was introduced formally into the Roman rite in the late medieval times
The practice of elevating the Host clearly into the sight of the people immediately after the consecration was intended as sign that the change from bread to the Body of Christ had occurred at that stage, against the view of those who held that the change occurred only when the bread and the wine had both been consecrated
For many during medieval times this precise moment at the elevation of the Host was the great event of the Mass
Note the precise way that the priest holds the Host at this precise moment which was regulated by the rubrics. It is the holding of the Host in joined hands, bringing to mind the ideas of prayer, recollection and surrender of self to and for God
See Gerard G Grant SJ The Elevation of the Host in Theological Studies Vol.1 (1940) (.pdf file)
The great unifying force of the Eucharist in Medieval times shown in this panel of 1500 was undone by the Reformation when disputes about the Eucharist became the source of disunity and fracture
See also in Google Books: Gerhart B Lardner, Images and Ideas in the Middle Ages: Selected Studies in History and Art )(Chapter 8: The Gestures of Prayer in the Papal Iconography of the Thirteenth and Early Fourteenth Centuries
Posted by Unknown at 8:35 pm