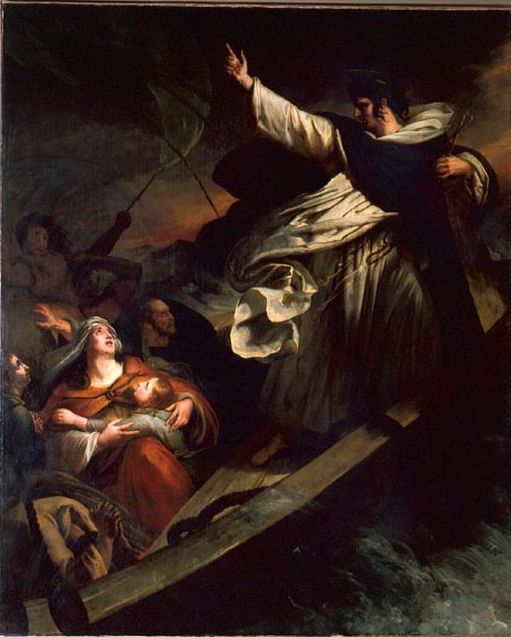 Ary Scheffer 1795 - 1858
Saint Thomas d'Aquin prêchant la confiance en Dieu pendant la tempête
Saint Thomas Aquinas preaching trust in God during a tempest
1824
Oil on canvas
3.93m x 2.94m
Musée du Petit-Palais, Paris
Ary Scheffer is known for many paintings including the celebrated Vision of St Augustine and his mother St Monica at Ostia
See The National Gallery, London and A Shared Vision Before Death in Ostia
In this work we see a different side of St Thomas Aquinas from that usually depicted. The books, pen and paper have been put away. There is no stasis or ecstasy or apotheosis. The scene is dynamic.
St Thomas is fulfilling his vocation as one of the Order of Preachers: preaching and encouraging the people to faith
One is reminded of the occasion narrated in the Gospels [Mark 4:35-41, Luke 8:22-25 and Matthew 8:23-27] when Jesus and his disciples were crossing the Sea of Gallilee in a boat when a furious storm came up, with the waves breaking over the boat, so that it was nearly swamped.
Jesus was in the stern, sleeping on a cushion, but the disciples woke him and said to him, "Teacher, don't you care if we drown?"
The Gospel of Mark then states that:

He got up, rebuked the wind and said to the waves, "Quiet! Be still!" Then the wind died down and it was completely calm. He said to his disciples, "Why are you so afraid? Do you still have no faith?" They were terrified and asked each other, "Who is this? Even the wind and the waves obey him!"

The two questions: "Why are you so afraid?" and "Do you still have no faith?" seem relevant to this painting
Pope Benedict XVI in his discussion of St Thomas referred to his great intellectual abilities and works but he also went on to say:

"In addition to study and teaching, Thomas also dedicated himself to preaching to the people. And the people too came willingly to hear him. I would say that it is truly a great grace when theologians are able to speak to the faithful with simplicity and fervour.
The ministry of preaching, moreover, helps theology scholars themselves to have a healthy pastoral realism and enriches their research with lively incentives ...
In December 1273, he summoned his friend and secretary Reginald to inform him of his decision to discontinue all work because he had realised, during the celebration of Mass subsequent to a supernatural revelation, that everything he had written until then "was worthless".
This is a mysterious episode that helps us to understand not only Thomas' personal humility, but also the fact that, however lofty and pure it may be, all we manage to think and say about the faith is infinitely exceeded by God's greatness and beauty which will be fully revealed to us in Heaven"