IHS: The Holy Name of Jesus: St Bernardino of Siena 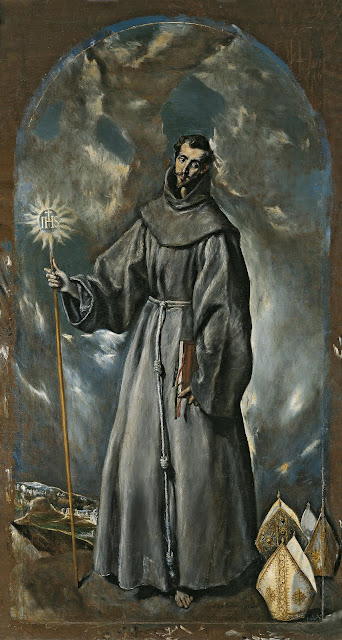 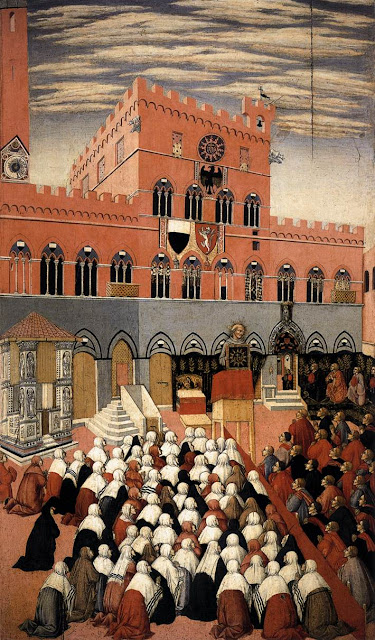 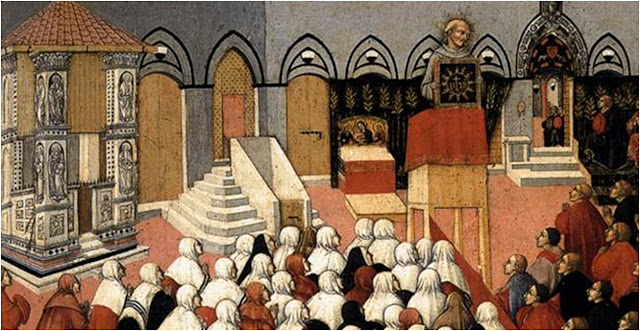 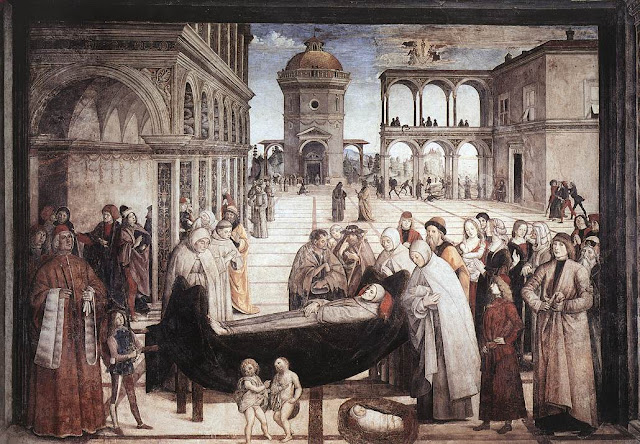 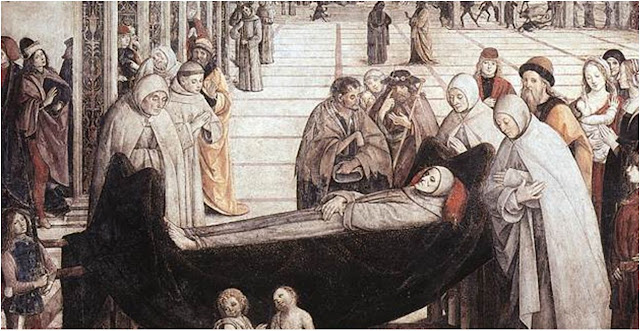 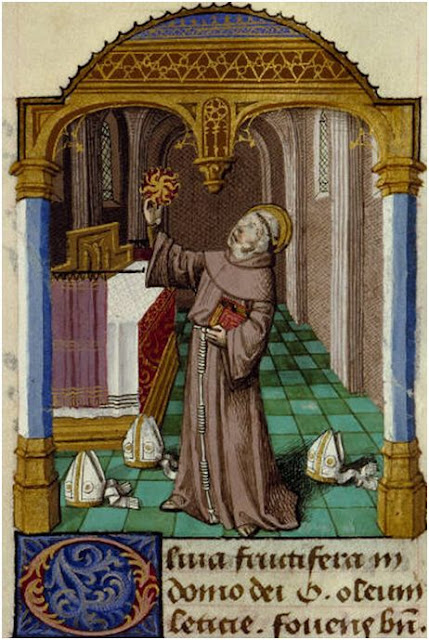 St Bernardino of Siena
From A Book Of Hours made and used in Paris
About 1470
Miniature from illuminated manuscript
Folio 190, Chambéry - BM - ms. 0001
In his day Saint Bernardino of Siena (8 September 1380 – 20 May 1444) was a controversial figure. His enemies even got him put on trial for heresy
For some reason or other his "star" declined sharply after the Second Vatican Council
But in his day he was probably the greatest preacher of the fifteenth century even receiving the title of "the Apostle of Italy". No mean orator himself, Pope Pius II had listened to Saint Bernardino and said that the saint was listened to as another Paul
He literally travelled the length and breadth of Italy preaching
He was venerated especially in Tuscany. St. Antoninus, Antoninus Pierozzi (1389—1459; Archbishop of Florence from 1446—59), paid him the highest tributes.
After his death Siena where he had often preached and held in the highest veneration sought to recover his body for its city. It had to do with other things such as erecting a beautiful Oratory in his name (still there) and commissioning Pietro di Sano`s paintings of the Life of the Saint of which the above is only one panel.
During the latter half of the 1440s and particularly around 1450, the year in which Saint Bernardino was canonised, Sano di Pietro was commissioned to paint numerous images of the patron saint of Siena
The sunken cheeks of Saint Bernardino and the physiognomic resemblance among the various representations of the saint, are explained by the fact that Sano di Pietro apparently used a wax mask, taken of the saint's head at the moment of his death, to ensure an accurate likeness
Saint Bernardino was canonised in 1450, only six years after his death, by Pope Nicholas V.
As a child he had been taught to venerate The Holy Name of Jesus in a special manner. On reading the epistles of Saint Paul, he had found the Divine Name on almost every line. The Name of Jesus was the usual theme of his addresses.
He used to hold a board in front of him while preaching, with the sacred monogram painted on it in the midst of rays and afterwards expose it for veneration. The monogram was JHS ("Jesus Hominum Salvator" "Jesus Saviour of Men")
The emblem or monogram of The Holy Name is usually in most portraits of him. As are the three bishops` mitres in recognition of the fact that he turned down three offers from various Popes of various powerful bishoprics in Italy
His teaching was vindicated by the feast of the Triumph of the Holy Name, conceded to the Friars Minor in 1530 and extended to the Universal Church in 1722.
Another great theme of his preaching and work was the preaching of peace and the establishment of peace at a time and in areas where there was constant warfare and feuding.
The Vatican website carries an extract of one of his sermons on the Holy Name of Jesus. Here it is.

"The name of Jesus is the glory of preachers
"The name of Jesus is the glory of preachers, because the shining splendour of that name causes his word to be proclaimed and heard. And how do you think such an immense, sudden and dazzling light of faith came into the world, if not because Jesus was preached?
Was it not through the brilliance and sweet savour of this name that God called us into his marvellous light?
When we have been enlightened, and in that same light behold the light of heaven, rightly may the apostle Paul say to us: Once you were darkness, but now you are light in the Lord; walk as children of light.
So this name must be proclaimed, that it may shine out and never be suppressed. But it must not be preached by someone with sullied mind or unclean lips, but stored up and poured out from a chosen vessel. That is why our Lord said of Saint Paul: He is a chosen instrument of mine, the vessel of my choice, to carry my name before the Gentiles and kings and the sons of Israel.
In this chosen vessel there was to be a drink more pleasing than earth ever knew, offered to all mankind for a price they could pay, so that they would be drawn to taste of it. Poured into other chosen vessels, it would grow and radiate splendour. For our Lord said: He is to Carry my name.
When a fire is lit to clear a field, it burns off all the dry and useless weeds and thorns. When the sun rises and darkness is dispelled, robbers, night-prowlers and burglars hide away.
So when Paul's voice was raised to preach the Gospel to the nations, like a great clap of thunder in the sky, his preaching was a blazing fire carrying all before it. It was the sun rising in full glory. Infidelity was consumed by it, false beliefs fled away, and the truth appeared like a great candle lighting the whole world with its brilliant flame.
By word of mouth, by letters, by miracles and by the example of his own life, Saint Paul bore the name of Jesus wherever he went. He praised the name of Jesus at all times, but never more than when bearing witness to his faith.
Moreover, the Apostle did indeed carry this name before the Gentiles and kings and the sons of Israel as a light to enlighten all nations. And this was his cry wherever he journeyed: The night is passing away, the day is at hand. Let us then cast off the works of darkness and put on the armour of light; let us conduct ourselves honourably as in the day. Paul himself showed forth the burning and shining light set upon a candlestick, everywhere proclaiming Jesus, and him crucified.
And so the Church, the bride of Christ strengthened by his testimony, rejoices with the psalmist, singing: 0 God, from my youth you have taught me, and I still proclaim your wondrous deeds. The psalmist exhorts her to do this, as he says: Sing to the Lord, and bless his name, proclaim his salvation day after day. And this salvation is Jesus, her saviour."
From a sermon by Saint Bernardine of Siena, priest (Sermo 49, De glorioso Nomine Iesu Christi, cap 2: Opera omnia, 4. 505-506)

It was the Observant Franciscans like St. Bernardine of Siena, St. John of Capestrano, Saint Simon of Lipnica(1435/1440 c. - 1482) who recommenced this devotion to the Holy Name and spread the devotion not ony in Italy but to Poland and far and wide.
Pope John Paul II had a particuar devotion to the Holy Name of Jesus
In the liturgical revisions of Vatican II, the Feast of the Holy Name was removed, though a votive Mass to the Holy Name of Jesus had been retained for devotional use. With the release of the revised Roman Missal in March 2002, he restored the Feast of the Holy Name as an optional memorial in the Ordinary Form on January 3.
St. John of Capestrano founded the first convent of the Observance in Krakow on 8th September 1453. The Friars Minor of the convent were called the “Berdardini” by the people. The Franciscans have had a continued presence in Krakow and surrounding areas since then. As a young man Pope John Paul II often prayed at the Franciscan churches there.
Such devotion is also seen in the Catechism issued during his pontificate as well as the many occasions he invoked the Holy Name in his addresses and homilies
The Catechism provides:

"Prayer to Jesus
2665 The prayer of the Church, nourished by the Word of God and the celebration of the liturgy, teaches us to pray to the Lord Jesus. Even though her prayer is addressed above all to the Father, it includes in all the liturgical traditions forms of prayer addressed to Christ. Certain psalms, given their use in the Prayer of the Church, and the New Testament place on our lips and engrave in our hearts prayer to Christ in the form of invocations: Son of God, Word of God, Lord, Saviour, Lamb of God, King, Beloved Son, Son of the Virgin, Good Shepherd, our Life, our Light, our Hope, our Resurrection, Friend of mankind. . . .
2666 But the one name that contains everything is the one that the Son of God received in his incarnation: JESUS. The divine name may not be spoken by human lips, but by assuming our humanity The Word of God hands it over to us and we can invoke it: "Jesus," "YHWH saves." The name "Jesus" contains all: God and man and the whole economy of creation and salvation. To pray "Jesus" is to invoke him and to call him within us. His name is the only one that contains the presence it signifies. Jesus is the Risen One, and whoever invokes the name of Jesus is welcoming the Son of God who loved him and who gave himself up for him.
2667 This simple invocation of faith developed in the tradition of prayer under many forms in East and West. The most usual formulation, transmitted by the spiritual writers of the Sinai, Syria, and Mt. Athos, is the invocation, "Lord Jesus Christ, Son of God, have mercy on us sinners." It combines the Christological hymn of Philippians 2:6-11 with the cry of the publican and the blind men begging for light. By it the heart is opened to human wretchedness and the Saviour's mercy.
2668 The invocation of the holy name of Jesus is the simplest way of praying always. When the holy name is repeated often by a humbly attentive heart, the prayer is not lost by heaping up empty phrases, but holds fast to the word and "brings forth fruit with patience." This prayer is possible "at all times" because it is not one occupation among others but the only occupation: that of loving God, which animates and transfigures every action in Christ Jesus.
2669 The prayer of the Church venerates and honours the Heart of Jesus just as it invokes his most holy name. It adores the incarnate Word and his Heart which, out of love for men, he allowed to be pierced by our sins. Christian prayer loves to follow the way of the cross in the Savior's steps. The stations from the Praetorium to Golgotha and the tomb trace the way of Jesus, who by his holy Cross has redeemed the world."

The saint`s memory is still celebrated in many parts of Italy. Indeed last year, the Saint went on his travels again. He is patron of the town of Filettino in Lazio, and his body was brought to the town on 25th July, As can be seen from the video below he can still bring out the crowds