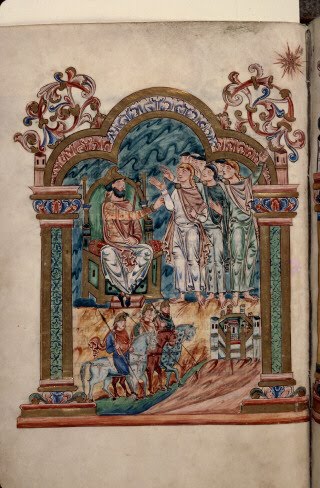 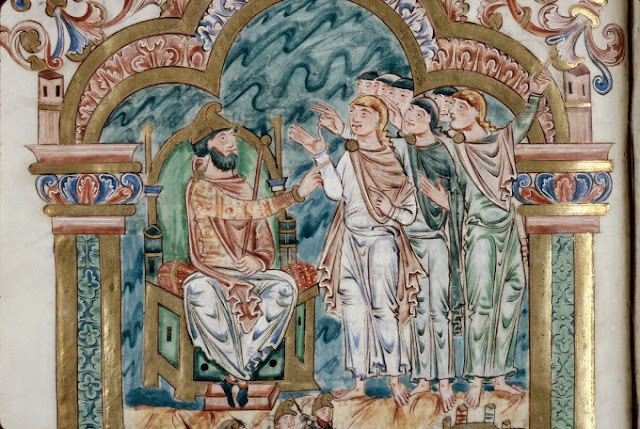 The Visit of the Magi to Herod
From Sacramentary
Illuminated manuscript
Circa 1020
From South east England
f. 036v ms. 0274
BM Rouen
In his Homily for the Feast of the Epiphany, the Pope amongst other things discussed the character of King Herod, whom the Magi visited before going to Bethlehem to worship at the manger
He said:

"First of all [the Magi] found King Herod.
He certainly was interested in the child of whom the Magi spoke; not, however, for the purpose of adoring him, as he, lying, wished to make understood, but to do away with him.
Herod was a man of power, who in the other sees only a rival to combat. At bottom, if we reflect well, even God seems a rival to him, in fact a particularly dangerous rival, who wished to deprive men of the vital space, of their autonomy, of their power; a rival who indicates the way to follow in life and thus impedes one's doing whatever one wishes.
Herod hears from his experts in the Sacred Scriptures the words of the prophet Micah (5:1), but his only thought is the throne. Hence God himself must be obfuscated and persons must be reduced to being simple pawns to be moved in the great chess-board of power.
Herod is not a likeable personality, someone whom we instinctively judge in a negative way because of his brutality.
But we must ask ourselves: is there perhaps something of Herod also in us? Perhaps we too at times see God as a sort of rival? Perhaps we too are blind before his signs, deaf to his words, because we think he puts limits on our life and does not allows us to dispose of our existence as we please?
Dear brothers and sisters, when we see God in this way we end up by feeling dissatisfied and unhappy, because we do not let ourselves be guided by Him who is the foundation of everything. We must remove from our mind and heart the idea of rivalry, the idea that to give space to God is to limit ourselves; we must open ourselves to the certainty that God is the omnipotent love that does not take anything away, does not threaten, rather,
He is the only One capable of giving us the possibility of living in fullness, of experiencing true joy."

Herod the Great (62 BC - 4 BC) was King of Judaea, appointed by a declaration of the Roman senate in 40BC and first king of the Herodian dynasty. Herod fought, with Roman support, against Mattathias Antigonus last king of the Hasmonean dynasty for control of Judaea until Herod captured Jerusalem in 37BC.
He was notorious for the cruelty of his reign
In 2006, the Second Special Synod of African Bishops on the theme of "The Church in Africa in Service to Reconciliation, Justice and Peace: 'You Are the Salt of the Earth... You Are the Light of the World' (Mt 5:13, 14)" discussed how the Christian should react to the modern Herod
They said:

"The Christian's attitude towards the temptation of a politician who wants to set himself up as the master of life can only be that of the Three Kings (cf. Mt 2: 12, 16-18), who had concern for the Child Jesus and his family, and tried to protect his life at all costs.
In the same way, Christians oppose the modern sorcerers that sow misery and death everywhere in Africa with their arms and criminal policies.
Through Baptism and the Celebration of the Eucharist, Christians receive life from God and pledge to make it grow in not only them but others. This acceptance of Christ's life in us should lead us to resist any message and authority contrary to life.
The massacre of the Innocents in Jesus' time, when the Three Kings resolutely protected him, was the result of Herod's bloody decision. And since then, how many martyrs, men and women, in the history of Christianity, have paid with their lives for this resistance out of fidelity to the Gospel and the Person of Christ?"