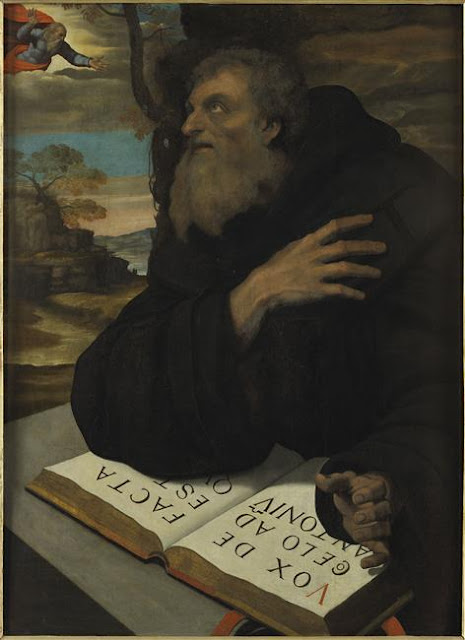 Sebastiano Luciani called Sebastiano del Piombo (1485-1547)
St Anthony the Hermit
Oil on wood
1.37 m x 1.095m
Château at Compiègne
Venetian-born and trained, perhaps by Giorgione, Sebastiano moved in 1511 to Rome, where he became a major portraitist and painter of religious subjects. He was a protégé of Michelangelo, who significantly influenced his art.
After Raphael's death, Sebastiano was the foremost painter in Rome and the first artist to return there after the 1527 Sack of Rome
Sebastiano del Piombo was the name given to him when Pope Clement VII awarded him the lucrative papal office of keeper of the leaden seals in 1531
St Anthony`s biographer was Saint Athanasius, the Bishop of Alexandria. When Athanasius went into exile over the Arian dispute, St Anthony was one of his stoutest defenders
St Anthony and Athanasius were good friends.
On the death of St Anthony, Athanasius received as a legacy two sheepskins and a mantle
Of St Anthony, Athanasius wrote:

"The fact that his fame has been blazoned everywhere, that all regard him with wonder, and that those who have never seen him long for him, is clear proof of his virtue and God's love of his soul.
For not from writings, nor from worldly wisdom, nor through any art, was Anthony renowned, but solely from his piety towards God. That this was the gift of God no one will deny.
"For from whence into Spain and into Gaul, how into Rome and Africa, was the man heard of who dwelt hidden in a mountain, unless it was God who makes his own known everywhere, who also pro-mised this to Anthony at the beginning?
For even if they work secretly, even if they wish to remain in obscurity, yet the Lord shows them as lamps to lighten all, that those who hear may thus know that the precepts of God are able to make men prosper and thus be zealous in the path of virtue" (Life of Anthony, 93, 5-6).

Of St Anthony, Pope Benedict XVI said in the conclusion of his Encyclical Deus Caritas Est:

"Yet in the history of the Church, how many other testimonies to charity could be quoted! In particular, the entire monastic movement, from its origins with Saint Anthony the Abbot († 356), expresses an immense service of charity towards neighbour. In his encounter “face to face” with the God who is Love, the monk senses the impelling need to transform his whole life into service of neighbour, in addition to service of God.
This explains the great emphasis on hospitality, refuge and care of the infirm in the vicinity of the monasteries. It also explains the immense initiatives of human welfare and Christian formation, aimed above all at the very poor, who became the object of care firstly for the monastic and mendicant orders, and later for the various male and female religious institutes all through the history of the Church."