Chi-Rho: THe Holy Name of Jesus

The city of Albenga is on the Italian Ligurian coast near Savona.
It is an ancient city dating back to Roman times.
Within its walls still stands an ancient Baptistry dating back to the 5th century. It is the oldest paleo-Christian Baptistry still standing in the province of Liguria and one of the oldest in Italy.
Along with Ravenna it is one of the few in Byzantine style still standing in Northern Italy Its state of preservation is remarkable
See the photos below 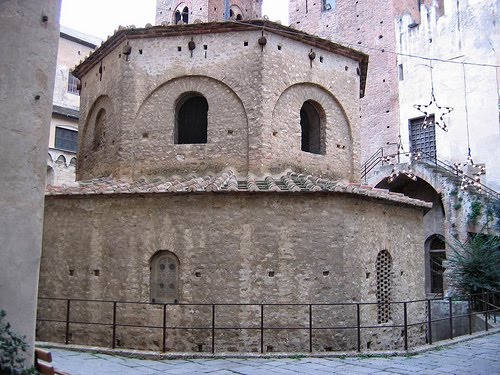 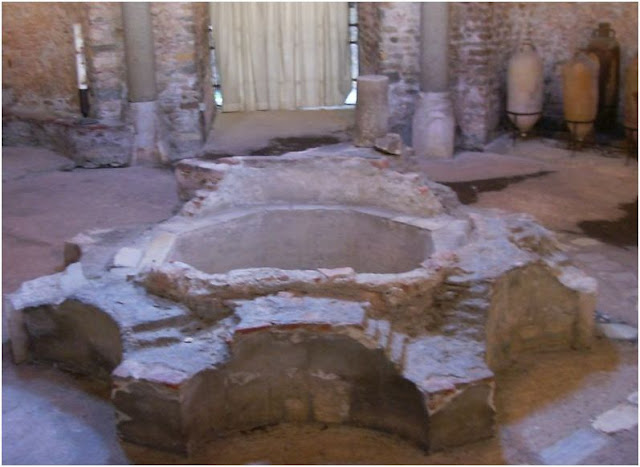 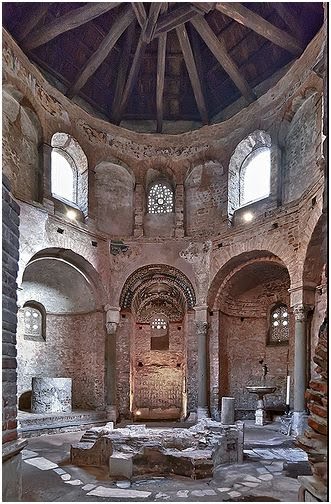 One of the most significant features is a 6th century mosaic within one of the niches of the Baptistry. See below 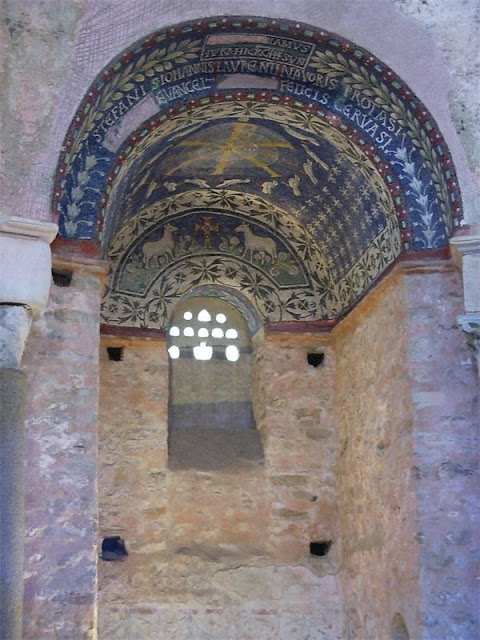 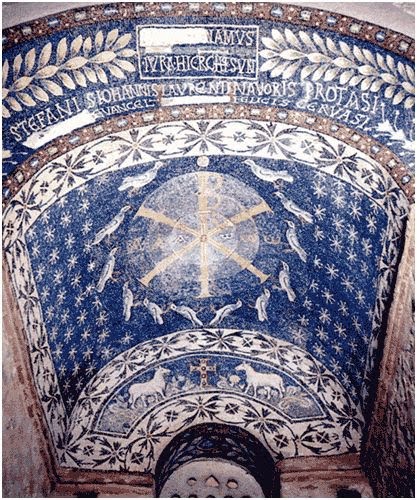 It represents Christ and the Trinity with the Twelve Apostles. Christ is the "Christogram" (Chi Rho) representing the name of Christ. There is also a small red cross or crucifix. The Cross is circled by three concentric circles representing the Trinity. The Trinity and Christ are circled by the 12 doves or Apostles which recalls the invitation by Christ to the Apostles to go forth and baptise in the name of the Father, the Son and the Holy Spirit
The use of a wreath around the Chi Rho symbolises the victory of the Resurrection over death. It is an early visual representations of the connection between the Crucifixion of Jesus and his triumphal resurrection
Often the Chi Rho symbol would be flanked by the Greek letters "Alpha" and "Omega". The term Alpha and Omega comes from the phrase "I am the alpha and the omega [,the first and the last] " an appellation of Jesus in the Book of Revelation (verses 1:8, 21:6, and 22:13).
In this gravestone from the 5th Century discovered in a sandpit in France, one can see the full "Chi Rho" insignia: 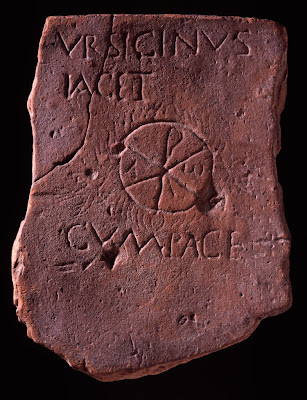 Grave slab: rectangular, re-used brick-tile architectural fragment; inscribed with chi-rho and alpha and omega in wreath with dove left, and VRSICINVS IACET CVM PACE (Urscinus Rests in Peace)
Excavated St Acheul (sandpit)
5th century (Meroviginian)
Height: 25.4 centimetres
The British Museum, London
A monogram of the name of Jesus Christ was not only an abbreviation but also a symbol. It was also a reminder of important truths. The name of Jesus had to be revered. For Christians it was a confession of faith

But after 313 its meaning changed. It also became an Imperial symbol. It was the symbol adopted by the Roman emperor Constantine, after his conversion to Christianity in the year 313
The location of the symbol was important. In Albenga it was placed on the ceiling of the niche. One had to look up to see it then after one saw it, one naturally bowed one`s head.
On a gravestone the symbol was more than apposite: the Church is of the living and the dead. A viewer might have had to incline one`s head to view it.

The sign and depiction of Christ was after the adoption of Christianity by Constantine also seen on mosaic floors. Perhaps there was an idea that to look at it one had to incline one`s head. However it may also be a sign that the increase in such depictions led to a devaluation in the original message of the depiction and the lack of veneration towards the Holy Name. It simply became another house decoration and a symbol of Imperial loyalty

Apart from the depiction of Christ with the Chi-Rho in The Hinton St Mary Mosaic examples of such floor mosaics are almost non-existent.

In 427 the emperor specifically banned the making of images of Christ on mosaic floors, and he ordered all existing ones to be removed.
The symbol CHI RHO with The Holy Name of Jesus echoed the words of St Paul to the Philippians:

Let the same mind be in you that was in Christ Jesus,
who, though he was in the form of God,
did not regard equality with God
as something to be exploited,
but emptied himself,
taking the form of a slave,
being born in human likeness.
And being found in human form,
he humbled himself
and became obedient to the point of death—
even death on a cross.
Therefore God also highly exalted him
and gave him the name
that is above every name,
so that at the name of Jesus
every knee should bend,
in heaven and on earth and under the earth,
and every tongue should confess
that Jesus Christ is Lord,
to the glory of God the Father.
Philippians 2.5-11 (emphasis added)