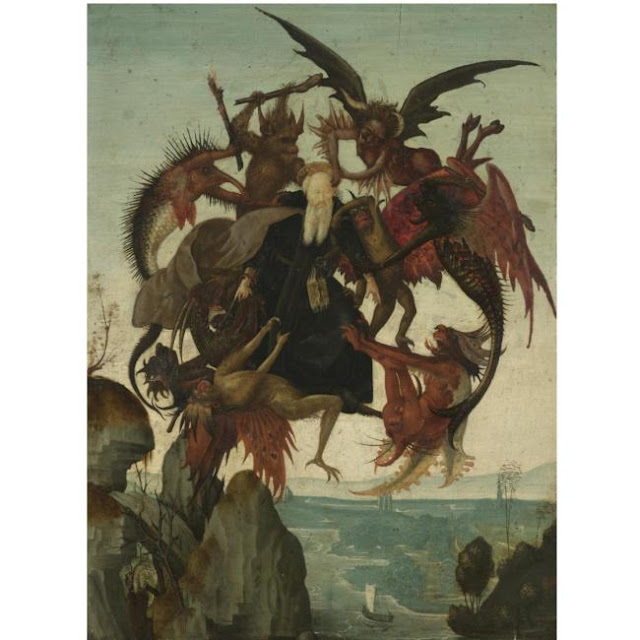 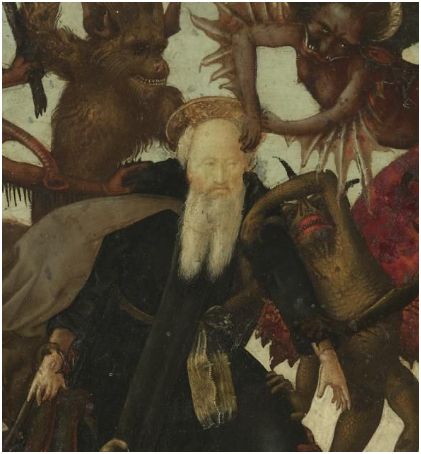 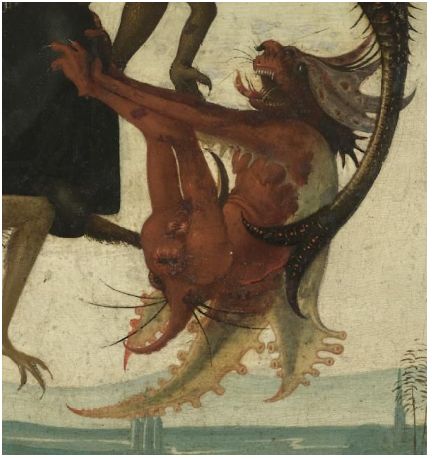 The young Michelangelo, whilst a pupil in Domenico Ghirlandaio's workshop, produced a painted, coloured copy after Martin Schongauer's print of The Temptation of Saint Anthony
In his biography of Michelangelo (written under Michelangelo`s supervision), Condivi wrote:

'And having been put by Granacci before an engraving, where the story of Saint Anthony is told, when he is beaten by devils, by Martino d'Ollandia [Martin Schongauer], a gifted man for those times, he painted a copy of it on a wooden panel, and given by the same [Granacci] colours and brushes, he did it so well, that anyone who saw it not only marvelled at its beauty but, according to some, Domenico [Ghirlandaio] was also filled with envy... In producing this work, for which there is not just the figure of the saint but also many strange and monstruous forms for the demons, Michelangelo used such diligence, that he did not colour in any part without having first gone back to look at nature, and so he went to the fishmonger's to consider which form and colour the wings of the fish should be, and the colour of their eyes and all their parts, which he then faithfully represented in his painting'; A. Condivi, Vita di Michelangelo Buonarroti, Florence 1553.

'Having arrived in Florence a tale of the aforementioned Alberto [Albrecht Durer], when the demons beat Saint Anthony, in the form of an engraving, Michele Agnolo copied it in pen and ink, in a manner that was unrecognisable, and he coloured that same drawing in, where, to imitate the strange forms of demons, he went to buy fish which had strange scales of bizzare colours, and in so doing displayed such a gift, that he gained credit and a reputation from it'; G. Vasari, Le Vite de' più eccellenti architetti, pittori et scultori italiani..., Florence 1550, ed. Einaudi 1986, p. 882, and footnote 9.)

The theme or subject matter of the work is based on a story in the life of Saint Anthony the Great, written by Athanasius of Alexandria in the fourth century, which describes how the Egyptian hermit-saint had a vision that he levitated into the air and was attacked by demons, whose torments he withstood.
The Golden Legend also narrates the story. While Anthony was living in a tomb, a crowd of demons came and tore at him so savagely that his servant thought St Anthony was dead and carried him on his shoulders. He regained consciousness and was carried back to his tomb. He was so weakened he lay there prostrate. However he issued a challenge to the demons to renew the fight.
They re-appeared and tore at him fiercely with their teeth, horns and claws
Suddeny a light appeared and the demons were driven away and his wounds were cured.
Realising that Christ was there, St Anthony asked why Christ did not come earier to help him and cure his wounds.
Christ replied that he had been there but had wanted to see how he woud fight. He said that because the saint had fought so manfully, he would make his name known all over the earth.
In Florence St Anthony Abbot had a further significance. His feast day marked the day of the return of the oligarchy to power in 1382 after the Ciompi Revolt in 1378. The Oligarchy consisting of the Albizzi, the Peruzzi, the Barbadori and the Strozzi lasted until 1434 when the Medici assumed control.
The print which was the inspiration for Michelangelo is below: 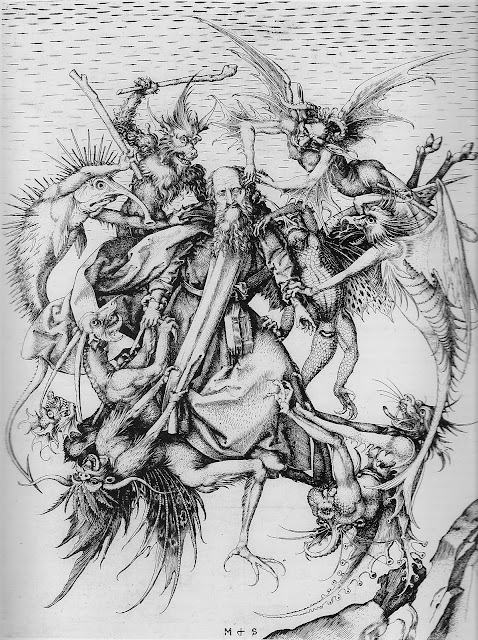 Saint Anthony Abbot is regarded as the founder of monasticism in the West. He was born in Egypt in about 251, and died in the year 356. But he was not the first hermit or monk. St Paul the Hermit was more senior to St Anthony
Posted by Unknown at 6:24 pm