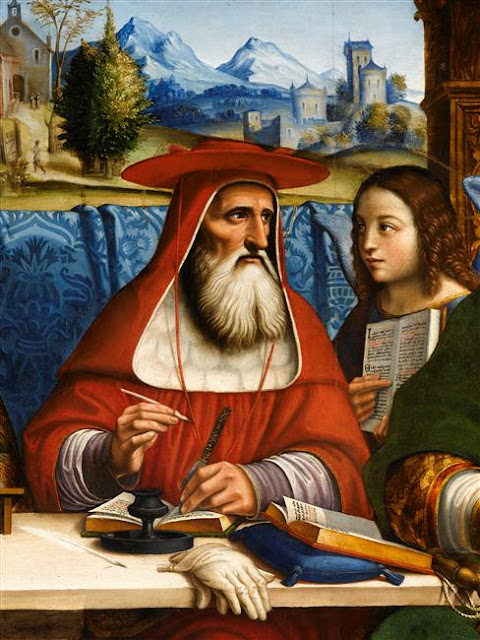 Pier Francesco Sacchi (called Il Pavese) (1485-1528)
St Jerome
Detail from The Four Doctors of the Church with the symbols of the Four Evangelists 1516
Oil on wood
1.96 x 1.67 m
Musée du Louvre, Paris
How do we venerate a great Saint and Doctor of the Church, like Saint Jerome (c. 347 – 30 September 420) ? He lived so long ago. How can we know or relate to him ?
Blessed John Henry Newman considered that we could: through his writings.
Indeed Newman thought that was the only way that we could know a Saint and his or her true character. Often the biography of a Saint is merely a portrait of an empty shell, a collection of incidents.
The writings of the Saint are the true fingerprints which we should examine: the man or woman is in the language.

"A Saint's writings are to me his real "Life;" and what is called his "Life" is not the outline of an individual, but either of the auto-saint or of a myth.
Perhaps I shall be asked what I mean by "Life." I mean a narrative which impresses the reader with the idea of moral unity, identity, growth, continuity, personality.
When a Saint converses with me, I am conscious of the presence of one active principle of thought, one individual character, flowing on and into the various matters which he discusses, and the different transactions in which he mixes. It is what no memorials can reach, however skilfully elaborated, however free from effort or study, however conscientiously faithful, however guaranteed by the veracity of the writers.
Why cannot art rival the lily or the rose? Because the colours of the flower are developed and blended by the force of an inward life; while on the other hand, the lights and shades of the painter are diligently laid on from without. A magnifying glass will show the difference. Nor will it improve matters, though not one only, but a dozen good artists successively take part in the picture; even if the outline is unbroken, the colouring is muddy.
Commonly, what is called "the Life," is little more than a collection of anecdotes brought together from a number of independent quarters; anecdotes striking, indeed, and edifying, but valuable in themselves rather than valuable as parts of a biography; valuable whoever was the subject of them, not valuable as illustrating a particular Saint.
It would be difficult to mistake for each other a paragraph of St. Ambrose, or of St. Jerome, or of St. Augustine; it would be very easy to mistake a chapter in the life of one holy missionary or nun for a chapter in the life of another"
(From Blessed John Henry Newman, St Chrysostom in The Rambler May 1859)

"And so of those intellectual and moral objects which are brought home to us through our senses;—that they exist, we know by instinct; that they are such and such, we apprehend from the impressions which they leave upon our minds. Thus the life and writings of Cicero or Dr. Johnson, of St. Jerome or St. Chrysostom, leave upon us certain impressions of the intellectual and moral character of each of them, sui generis, and unmistakable. We take up a passage of Chrysostom or a passage of Jerome; there is no possibility of confusing the one with the other; in each case we see the man in his language. And so of any great man whom we may have known: that he is not a mere impression on our senses, but a real being, we know by instinct; that he is such and such, we know by the matter or quality of that impression."
(From Blessed John Henry Newman, An Essay in aid of a Grammar of Assent Chapter 5 § 1.)