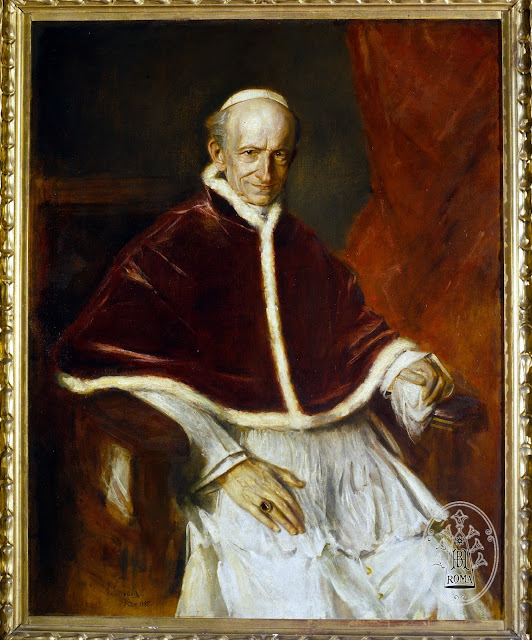 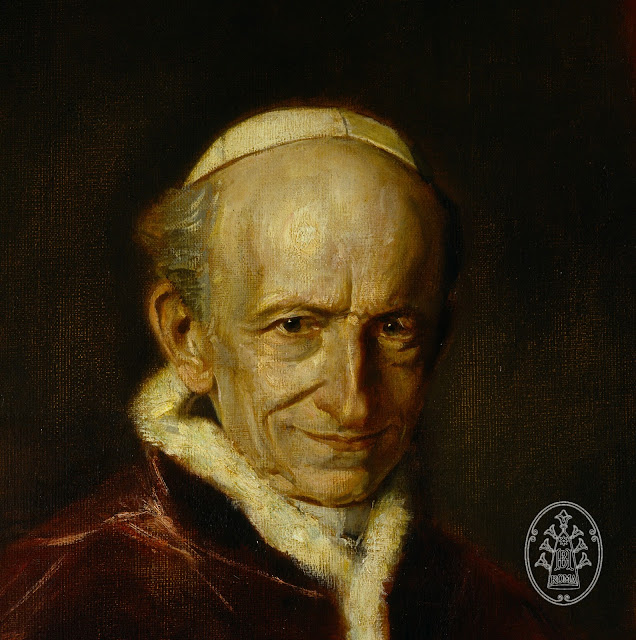 Franz Seraph von Lenbach 1836 - 1904
Portrait of Pope Leo XIII (1885)
Oil on canvas
German Embassy to the Holy See, Rome
There has been some comment about the papal stole worn by Pope Benedict XVI at the Ecumenical Service in Westminster Abbey.
See Father Ray`s post entitled Pope of Sign and Symbol  for an overview.
One is apt to think that the Ecumenical Movement in the Catholic Church began with Pope John XXIII and the Second Vatican Council
In 2008, the then President of the Pontifical Council for the Promotion of Christian Unity, Cardinal Walter Kasper offered some reflections on the History of the Ecumenical Movement
The reflections entitled Charting the road of the ecumenical movement are on the Vatican website.
Interestingly he discussed the initiatives by the Roman Catholic Church regarding ecumenism prior to the Second Vatican Council`s Decree Unitatis Redintegratio
He said:

"In the 19th-century, when Catholic movements of spiritual renewal existed in many places, we already find groups praying for the Church's unity. Saints such as Vincent Pallotti (1795-1850) and Fr Luigi Orione (1872-1940), both important for pastoral renewal in Rome, as well as Adolf Kolping (1813-65) and the famous Bishop Ketteler of Mainz (1811-77), well known for their social involvement, supported and promoted prayer for Christian unity.
In his 1895 Brief Providae Matris, Pope Leo XIII recommended a Week of Prayer for the week preceding Pentecost. He wrote:

"It is a matter of praying for a work comparable to the renewal of the First Pentecost when all the faithful were gathered round the Mother of Jesus in the Upper Room, of one mind and unanimous in prayer".

Two years later, in his Encyclical Divinum Illud Munus, the Pope spoke of the prayer in which it was asked that the good of Christian unity be promoted.
When the entire Society of the Atonement joined the Catholic Church, Pope Pius X, in 1909, gave his official Blessing to the Week of Prayer in January. Benedict XV supported it and introduced it definitively into the Catholic Church. Pius XI also encouraged it, and in his 1943 Encyclical Mystici Corporis, Pius XII said that he would pray for the Church's unity after Christ's example."

As well as being the Pope who made Cardinal Newman a Cardinal, Pope Leo XIII was the first modern Pope to advocate Church unity and how it should be achieved.
See also:
The History of Catholic Ecumenism: From Pope Leo XIII to Pope John XXIII by Eric Sammons
Graymoor Ecumenical and Interreligious Institute, Brief History — Week of Prayer for Christian Unity 2011
Posted by Unknown at 8:11 pm