A Letter of St Jerome to Nepotian

It will soon be the Memorial for one of the original Four Doctors of the Church: St Jerome. Here are four works by Guercino of the great Saint.
All are different and all separately illustrate different aspects of the saint and his life. 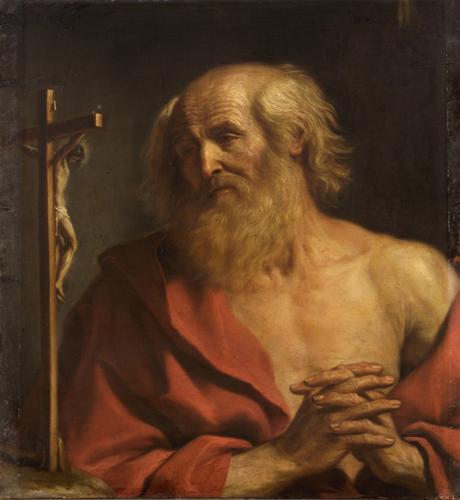 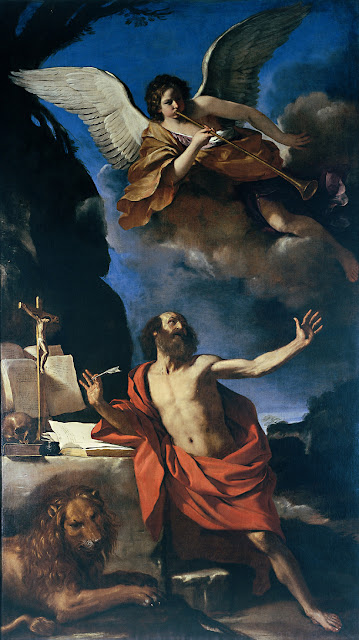 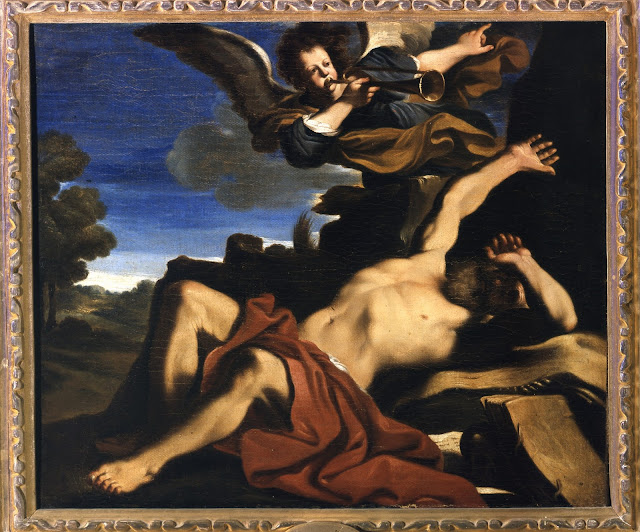 Nepotian was a soldier who retired from the military and became a cleric. His uncle, Heliodorus, was a bishop at Altinum. Nepotian was a presbyter there.
Here is part of a letter about the clerical life which St Jerome wrote to him in AD 394. The whole letter is worth reading in its entirety. Jerome in his vivid style reveals so much of his character and beliefs. Across the centuries he speaks to Nepotian and to us across the centuries.
The lengthy letter ranges widely: in the number of topics covered, works referred to, tone, styles.
Here is one of the more serious parts of the letter

"13. Do not angle for compliments, lest, while you win the popular applause, you do despite to God.
"If I yet pleased men," says the apostle, "I should not be the servant of Christ."
He ceased to please men when he became Christ's servant Christ's soldier marches on through good report and evil report, the one on the right hand and the other on the left. No praise elates him, no reproaches crush him. He is not puffed up by riches, nor does he shrink into himself because of poverty.
Joy and sorrow he alike despises. The sun does not burn him by day nor the moon by night.
Do not pray at the corners of the streets, lest the applause of men interrupt the straight course of your prayers. Do not broaden your fringes and for show wear phylacteries, or, despite of conscience, wrap yourself in the self-seeking of the Pharisee. Would you know what mode of apparel the Lord requires?
Have prudence, justice, temperance, fortitude.
Let these be the four quarters of your horizon, let them be a four-horse team to bear you, Christ's charioteer, at full speed to your goal.
No necklace can be more precious than these; no gems can form a brighter galaxy. By them you are decorated, you are girt about, you are protected on every side. They are your defence as well as your glory; for every gem is turned into a shield.
14. Beware also of a blabbing tongue and of itching ears. Neither detract from others nor listen to detractors.
"Thou sittest," says the psalmist, "and speakest against thy brother; thou slanderest thine own mother's son. These things hast thou done and I kept silence; thou thoughtest wickedly that I was such an one as thyself, but I will reprove thee and set them in order before thine eyes."
Keep your tongue from cavilling and watch over your words. Know that in judging others you are passing sentence on yourself and that you are yourself guilty of the faults which you blame in them.
It is no excuse to say: "if others tell me things I cannot be rude to them."
No one cares to speak to an unwilling listener. An arrow never lodges in a stone: often it recoils upon the shooter of it. Let the detractor learn from your unwillingness to listen not to be so ready to detract.
Solomon says:--"meddle not with them that are given to detraction: for their calamity shall rise suddenly; and who knoweth the destruction of them both?"--of the detractor, that is, and of the person who lends an ear to his detraction."
(St Jerome. Letter 52. To Nepotian: Ep. 52, Ad Nepotianum de vita clericorum et monachorum)

In the letter he also shows his satirical and humorous side. Here he is warning Nepotian about the dangers of drink and over-indulgence:

"Let your breath never smell of wine lest the philosopher's words be said to you: "instead of offering me a kiss you are giving me a taste of wine." Priests given to wine are both condemned by the apostle and forbidden by the old Law. Those who serve the altar, we are told, must drink neither wine nor shechar. Now every intoxicating drink is in Hebrew called shechar whether it is made of corn or of the juice of apples, whether you distil from the honeycomb a rude kind of mead or make a liquor by squeezing dates or strain a thick syrup from a decoction of corn.
Whatever intoxicates and disturbs the balance of the mind avoid as you would wine. I do not say that we are to condemn what is a creature of God. The Lord Himself was called a "wine-bibber" and wine in moderation was allowed to Timothy because of his weak stomach. I only require that drinkers should observe that limit which their age, their health, or their constitution requires. But if without drinking wine at all I am aglow with youth and am inflamed by the heat of my blood and am of a strong and lusty habit of body, I will readily forego the cup in which I cannot but suspect poison.
The Greeks have an excellent saying which will perhaps bear translation, Fat paunches have no refined sentiments "