What the Pope Heard ? And wanted to hear ?

On 22 November 1903, Pope Pius X issued a Motu Proprio (Instruction) on Sacred Music entitled Tra le Sollecitudini
Amongst other things, the Pope set forth new regulations for the performance of music in the Roman Catholic Church. These reforms reaffirmed the primacy of Gregorian chant, which had largely fallen out of favour.
His collaborator in the writing of the Instruction was Monsignor Lorenzo Perosi (21 December 1872 - 12 October 1956) the Maestro Perpetuo della Cappella Sistina, or Perpetual Director of the Sistine Choir, in Rome. 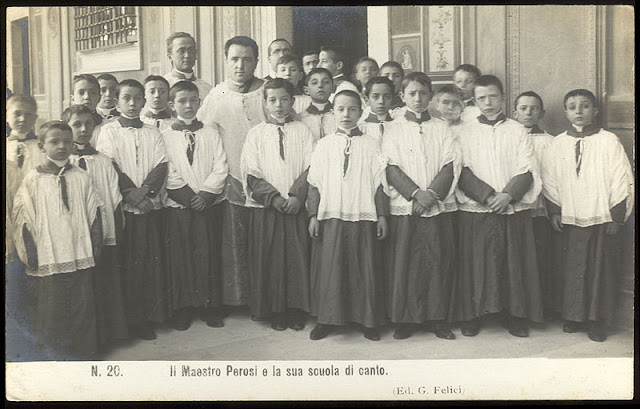 Don Perosi with his Sistine Choir (c. 1905).
Perosi was a prominent member of the Giovane Scuola, of which the most important Verismo composers or Veristi (Puccini, Mascagni, Leoncavallo, Giordano, and Cilea) were all considered members. Perosi was deeply admired by Rolland and Boito, Toscanini, and many others. Caruso sang his music, as did Sammarco, Tagliabue, Gigli, and other great singers from that era. His French admirers included Debussy and Massenet.
Giacomo Puccini is quoted as saying that "There's more music in Perosi's head than in mine and Mascagni's put together."
Gregorian chant is of course named after Pope Gregory I, (Bishop of Rome from 590 to 604), who is traditionally credited for having ordered the simplification and cataloging of music assigned to specific celebrations in the church calendar
In a letter to Cardinal Respighi, the Vicar General of Rome dated 8th December 1903 and following on the Motu Proprio, Pope Pius X set out his instructions for implementation of the Motu Proprio in the Diocese of Rome.
In the letter he wrote of Gregorian Chant:

" It is Our will, therefore, that in all seminaries and colleges in this fostering city there be introduced once more the most ancient Roman [Gregorian] chant which used to resound in our churches and basilicas and which formed the delight of past generations in the fairest days of Christian piety.
And as in former times the chant was spread abroad over the whole Western Church from Rome, so We desire that Our young clerics, educated under Our own eyes, may carry it with them and diffuse it again in their own dioceses when they return thither as priests to work for the glory of God. We are overjoyed to be able to give these regulations at a time when We are about to celebrate the 13th centenary of the death of the glorious and incomparable Pontiff St. Gregory the Great, to whom an ecclesiastical tradition dating back many centuries has attributed the composition of these sacred melodies and from whom they have derived their name.
Let Our dearly-beloved youths exercise themselves in them, for it will be sweet to us to hear them when, as We have been told will be the case, they will assemble at the coming centenary celebrations round the tomb of the Holy Pontiff in the Vatican Basilica during the Sacred Liturgy which, please God, will be celebrated by Us on that auspicious occasion."

In 1889, after decades of research, the monks of Solesmes released the first book in a planned series, the Paléographie Musicale. This reconstructed chant was academically praised, but rejected by Rome until 1903. Pope Pius X, promptly accepted the Solesmes chant — now compiled as the Liber usualis — as authoritative. In 1904, the Vatican edition of the Solesmes chant was commissioned.
Monsignor Antonio Rella, Master of the Sistine choir was Monsignor Perosi`s assistant and both were appointed members of the Commission to put into effect the Pope`s instructions.
Therefore the following recording from 1904 (click the permalink underneath to play it) in the Bibliothèque nationale de France in Paris is of more than passing interest to Church historians. 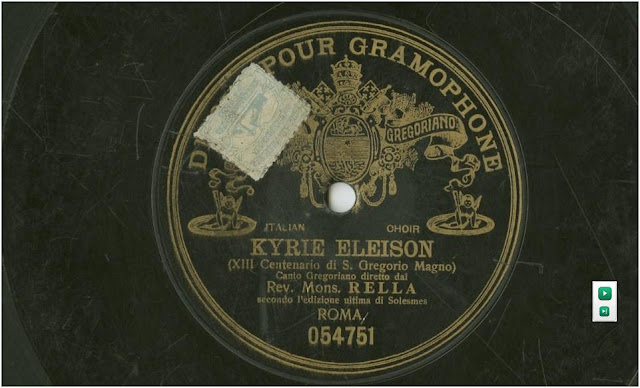 Permalink to the recording at the Bibliothèque nationale de France


It is a recording of the Sistine Choir under the direction of Monsignor Rella performing the Kyrie Eleison in Gregorian Chant for the 13th Centenary of St Gregory the Great and as provided in the second edition of the Abbey of Solesmes.
For a recording which is 106 years old it is surprisingly well preserved.
It is fascinating to think that when Pope Pius X celebrated the centenary of the death of Pope St Gregory the Great with Mass at the altar of Pope St Gregory this was part of the chant which he and the congregation would have heard
But more importantly in the "Musical Revolution" introduced by Tra le Sollecitudini, this was the "standard rendition" of the Kyrie for the Diocese of Rome, and through the influence of Rome to the rest of the Catholic world for very many years.
Posted by Unknown at 7:41 pm