The receiver of supernatural gifts never boasts and never exhibits them 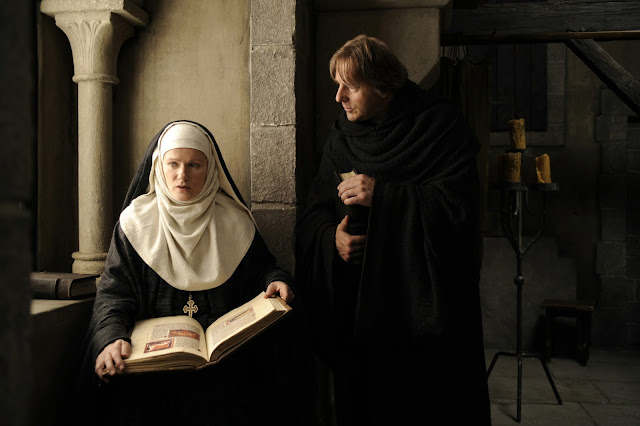 Barbara Sukowa as Saint Hildegard von Bingen in the German film Vision - From the Life of Hildegard von Bingen (2009) a film directed by Margarethe von Trotta
Pope Benedict XVI has re-started his catechesis on the medieval Church by commencing a short series of talks on Women in the Medieval Church
His first talk was on 1st September 2010 at the General Audience in Castel Gondolfo. It was the first part of a two part talk on the life of the great 12th century German saint, St. Hildegard of Bingen
A Benedictine nun, Christian mystic, composer, philosopher, playwright, physician, poet, naturalist, scientist and ecological activist she was a multi-talented, fully grounded, highly intelligent woman but who was forced to hide her light.
But such were her talents, her ability and genuine piety, she was in her time allowed to preach publicly and this was widely accepted. She was regarded as a great preacher and prophet.
In recent years she has become of particular interest to feminist scholars. The German film "Visions" on the life of St Hildegarde has sparked widespread interest in the saint.
The Catholic Encyclopedia has a full entry on her life and works.
Pope Benedict`s talk emphasises that Hildegard used her spiritual gifts for the renewal of the Church and the spread of authentic Christian living and that she is a reminder of the contribution which women are called to make to the life of the Church in our own time.
The talk entitled "The Receiver of Supernatural Gifts Never Boasts" by Pope Benedict is fully reported in Zenit
He said:

"In those centuries of history that we usually call medieval, several women are outstanding for their holiness of life and the richness of their teaching.
Today I would like to begin to present one of them to you: St. Hildegard of Bingen, who lived in Germany in the 12th century. She was born in the Rhineland in Bermersheim in 1098, in the region of Alzey, and died in 1179 at the age of 81, despite having permanently frail health.
Hildegard belonged to a noble and numerous family and, from her birth, she was vowed by her parents to the service of God. At 8 years of age, in order to receive an adequate human and Christian formation, she was entrusted to the care of the teacher Judith of Spanheim, who had withdrawn into a cloister near the Benedictine monastery of St. Disibod.
A small women's cloistered monastery was being formed, which followed the Rule of St. Benedict. Hildegard received the veil from Bishop Othon of Bamberg and, in 1136, on the death of Mother Judith, who had become the superior of the community, her fellow-sisters called Hildegard to succeed her.
She carried out this task bringing to fruition her gifts as an educated woman, spiritually elevated and able to address competently the organisational aspects of cloistered life. A year or so later, also because of the growing number of young women who knocked on the door of the monastery, Hildegard founded another community in Bingen, named after St. Rupert, where she spent the rest of her life.
The style with which she exercised the ministry of authority is exemplary for every religious community: It inspired a holy emulation in the practice of goodness, so much so that, as we see from testimonies of the time, the mother and the daughters competed in their reciprocal esteem and service.
Already in the years in which she was superior of the monastery of St. Disibod, Hildegard had begun to dictate the mystical visions she had received for some time to her spiritual adviser, monk Volmar, and to her secretary, a fellow sister to whom she was very devoted, Richardis of Strade.
As always happens in the life of true mystics, Hildegard, too, wanted to be subject to the authority of wise persons to discern the origin of her visions, fearing that they were the fruit of illusions and that they did not come from God. She turned, therefore, to the person that at her time enjoyed the highest esteem of the Church: St. Bernard of Clairvaux, of whom I have already spoken in some catecheses. He calmed and encouraged Hildegard.
However, in 1147 she received another very important approval. Pope Eugene III, who was presiding at a synod in Treviri, read a text dictated by Hildegard, presented to him by Archbishop Henry of Mainz. The Pope authorised the mystic to write down her visions and to speak publicly.
From that moment, Hildegard's spiritual prestige grew increasingly, so much so that her contemporaries attributed to her the title of "Teutonic prophetess."
This is, dear friends, the seal of an authentic experience of the Holy Spirit, source of every charism: The receiver of supernatural gifts never boasts, does not exhibit them and, above all, shows total obedience to ecclesial authority. Every gift distributed by the Holy Spirit, in fact, is destined for the edification of the Church, and the Church, through her pastors, recognises their authenticity.
I will speak once again next Wednesday about this great woman "prophetess," who speaks with great timeliness also to us today, with her courageous capacity to discern the signs of the times, with her love for creation, her medicine, her poetry, her music, which today is being pieced together, her love of Christ and of his Church, suffering also at that time, wounded also at that time by the sins of priests and laymen, and that much more loved as Body of Christ. So St. Hildegard speaks to us; we will speak of her again next Wednesday."

I do hope you find the following videos which are arrangements of sequences composed by St Hildegard as beautiful as I do. For ease of reference I have copied from Youtube the sometimes lengthy commentaries which accompany some of the videos


"Hildegard von Bingen - O Jerusalem, sequence to St Rupert.
Performed by Gothic Voices.
Hildegard re-founded St Rupert's monastery in 1150. The original buildings were destroyed by the Normans, providing Hildegard with a potent but implicit comparison between her monastery and Jerusalem, destroyed on Earth and rebuilt in Heaven (Revelation XXI.) {from the liner notes}.

O Jerusalem, city of gold,
adorned with the purple of the King;
O building of highest excellence
which is a light never darkened.
Truly, you are resplendent
in the dawn and the heat of the sun.
O blessed boyhood
glimmering in the dawn,
and O wonderful time of yuth
aflame in the sun.
For you, O noble Rupert,
shimmer in these like a jewel,
whence you cannot be hidden to fools;
the valley cannot hide the mountain.
Your windows, Jerusalem,
are wondrously adorned
with topaz and sapphire.
As you blaze in the windows, O Rupert,
you are revealed even to those
whose faith is lukewarm -
just as the valley cannot hide the mountain -
crowned with roses, lilies and purple
in a true revelation.
O soft flower of the grassland;
O sweet greeness of the apple;
O garnered load without pith;
none stoop to evil from your weight.
O sublime and unpolluted vessel,
not drained
in the dance in the old cave
and not running
with sores inflicted by the Ancient Enemy.
The Holy Spirit rings in you, for you are
numbered among the singers of Heaven,
and because you are honoured in Christ
since you have no stain.
What a pure vessel you are, O Rupert,
who sighed after God in fear of God in your boyhood
and in your youth,
and in the clasp of love,
and in the sweetest odour of good works.
O Jerusalem, your foundation is laid
with showering stones,
which is with tax-gatherers and sinners
who were stray sheep,
but found by the son of God
they ran to you
and were placed in you.
Then your walls blaze with living stones,
who by the greatest zeal of good will
have flown like clouds in Heaven.
And so your towers, O Jerusalem,
glow and gleam in the dawn-redness
and in the incandescence of the saints,
and with all the treasures of God
which you do not lack, O Jerusalem.
Whence you, O adorned ones,
and O crowned ones, who dwell in Jerusalem,
and you, O Rupert,
who are their friend in that dwelling,
help us, servants
labouring in exile.

"Spiritus Sanctus, the second Antiphon and Psalm 110/111 from the Vesper of Hildegard von Bingen.
Admiring the height of God´s Creation, praising him, thanking him.
Together with the photos of Marcus "Coy Dog" Werner. Photos, visualizing God´s splendour in bees, butterflies, birds and flowers"

Soprano: Maite Itoiz
This beautiful chant from Hildegard von Bingen is included in the album "ELFENTHAL, An Ancient Story" from Maite Itoiz and John Kelly (www.myspace.com/elfenthal) "