The Birth of the Virgin 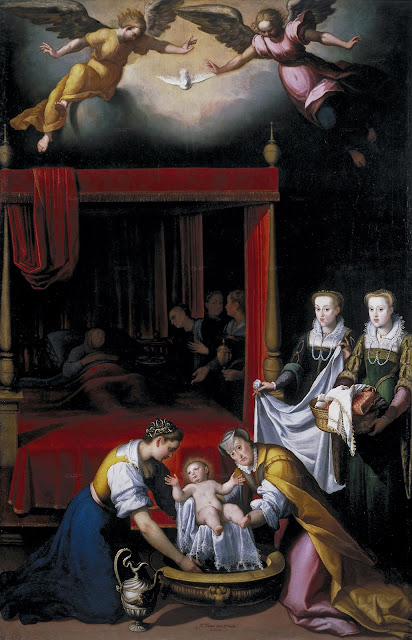 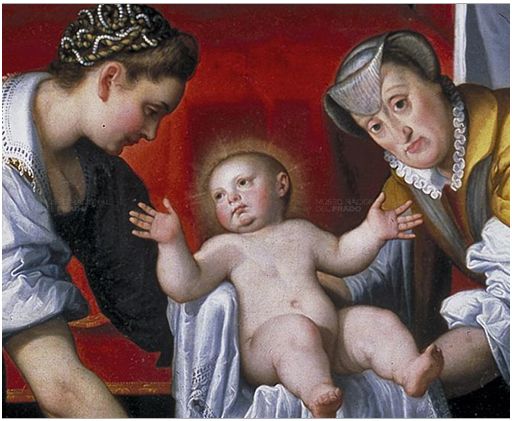 Juan Pantoja de la Cruz (1553 – 26 October 1608)
El Nacimiento de la Virgen / The Birth of the Virgin 1603
Oil on canvas
260 cm x 172 cm
Museo Nacional del Prado, Madrid
This painting was commissioned by Queen Margaret of Austria (1584-1611), wife of Philip III of Spain for her private oratory in the Palace of Valladolid. In 1601 the Spanish court had moved to Valladolid, and for the following five years the presence of the court and government transformed the town into the cultural centre of Spain
One of the figures in the painting is in fact the portrait of the mother of Margarita of Austria, Maria of Bavaria. She is the lady holding up the Infant Mary aided by two assistants behind her
The Queen had a strong devotion to the Virgin. She devoted her life to pious foundations and works of charity, including the foundation of the Descalzas Franciscas in Valladolid (1600-15) and the convent of La Encarnación in Madrid (1611), which was an important centre for artistic patronage in the second decade of the 17th century. She had eight children, among them the future King Philip IV and his sister Anna, later wife of Louis XIII of France
Pantoja de la Cruz succeeded Sanchez Coello as court painter of Philip II in 1588 and is known to have portrayed 39 members of the Spanish royal family.
Of the Feast of the Nativity of Mary, St Peter Damian said:

"It is the beginning of salvation, the origin of every feast,..The Mother of the Bridegroom is born. With good reason does the whole world rejoice today; and the Church, beside Herself, bids Her choirs sing wedding songs” (Sermon 45, On the Nativity of the Blessed Virgin Mary).