The Anglican View on The Papal Visit 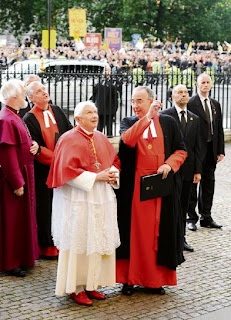 The Dean of Westminster shows Pope Benedict the statues of ten 20th-century martyrs on the west front of the Abbey (which include statues of Archbishop Romero and St Maximilian Kolbe)
The Church Times is the Osservatore Romano of the Anglican Church
In this week`s edition (follow the link above), The Church Times has delivered a generous and positive response to the recent Papal visit to the United Kingdom.
In a lead article, it stated:

"POPE BENEDICT XVI’s state visit to Britain was an overwhelming success and a positive contribution to his Church’s relations with the Church of England, several senior Anglican clerics said this week. ...
The Pope joined Dr Williams and other Christian leaders for even­ing prayer in Westminster Abbey. This, too, was receiving a pope for the first time; and he prayed at the grave of the Unknown Warrior and the shrine of St Edward the Confessor.
The Dean, the Very Revd Dr John Hall, spoke afterwards of an “im­mensely moving” service, and a “genuine respect and extraordinary chemistry” between Pope Bene­dict and Dr Williams. “What came across was the Pope’s personality: he was very friendly, and showed a very profound respect towards our tradi­tions in the service here.
“He obviously appreciated the music, he was delighted to hear that the tune to the first hymn, ‘Christ is made the sure foundation’, had been written by a former organist Henry Purcell, whom he had heard of.
There was an intense prayer in the shrine, and, after that, before he gave the bless­ing with the Archbishop of Can­terbury, he bent over and kissed the altar, and this spontaneous gesture was a potent symbol.
“I believe the whole trip surpassed expectations, and its significance was highlighted by the large numbers of people who turned out to see the Pope.”
The Dean believed that the visit would strengthen relations between the RC Church and the C of E ...
The President of the Methodist Con­ference, the Revd Alison Tomlin, was among the women ministers who also met the Pope at the Abbey. This was not a token gesture, she said, but highlighted the “breadth of the Chris­tian Church in this country”. She be­lieved that the visit would help ecumenical conversations.
Speaking on Vatican Radio, Dr Williams said that the day had been “enormously happy”, and that the Pope’s reception had been “hugely positive”.
Evening prayer had been “in­tensely moving for everyone who was there”. He dismissed as “prepos­terous” talk of conflict between the two Communions over Anglicanorum Coetibus ...
The Bishop of Winchester, the Rt Revd Michael Scott-Joynt, who was present in Lambeth, Westminster, and Birmingham, said that the visit had gone “extremely well”. There was, he said, “substantial mutual respect and appreciation” between the Pope and Dr Williams. Both leaders had said significant things, particularly about Christian participation in public life.
“Both leaders noted there are, as we know, differences between the two Churches, but it seems to me we saw the outstanding progress that has been made in the last 40 or 50 years. Roman Catholic and Anglican bishops inter­mingled on the Friday, and this was not just in a formal way, but because we value each other as colleagues in the mission of this country.”
The Bishop of Chichester, Dr John Hind, who had been at Lambeth Palace and Westminster, said that the crowds would not “easily forget the warmth of his [the Pope’s] human­ity”. “Pope Benedict seems to have left the UK with a very positive view of our country and its people — even of our weather, although it was touch and go for a while on Sunday morn­ing. Those who have followed the visit will have formed a no-less-positive view of Pope Benedict.” "

More importantly in its editorial, The Church Times while acknowledging that there was no immediate substantial advance, the Pope`s visit and words were an immediate and helpful contribution to the religious debate in the United Kingdom"
It went on:

"SECULARISTS 1: POPE 20. If the papal visit were a football match, this would be the final scoreline. Although there was a re­spect­able turn-out of protesters in central London on Saturday, they were vastly outnumbered by the faithful who attended the three outdoor events in Glasgow, London, and Birmingham, together with those who lined the streets to wave their Vatican flags at the Popemobile. With a few exceptions, most notably the anti-Iraq war rally in February 2003, large gatherings can sway opinion and turn arguments.
It was certainly the Vatican’s hope that Pope Benedict and his batallions might help counter the recent pandering to the small anti-religious lobby in the UK.
Of course, in football, it is not the number of fans that decides the result of the game, and the same goes for theology. Much rested on Pope Benedict’s utterances, and, as the extracts on the following pages show, these were remarkably consistent in tone. ...
On the whole, though, the Pope and his advisers chose to present a tolerant, open-spirited, collaborative Ca­tholicism. ... The address to members of other faiths talked of theological exchange and “sharing our spiritual riches”; the Westminster Abbey homily before ecumenical representatives spoke of “our common journey”; and the time with the Angli­cans was spent accentuating the positive, in particular “the remarkable progress” made in dialogue in the past 40 years."