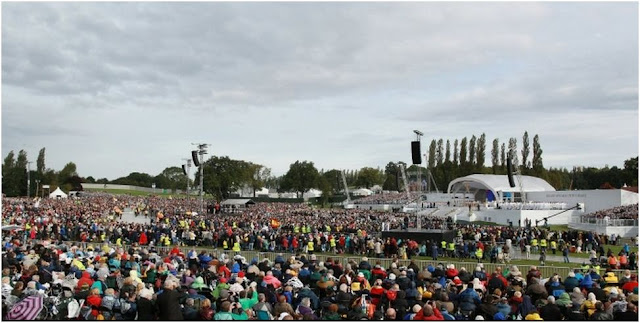 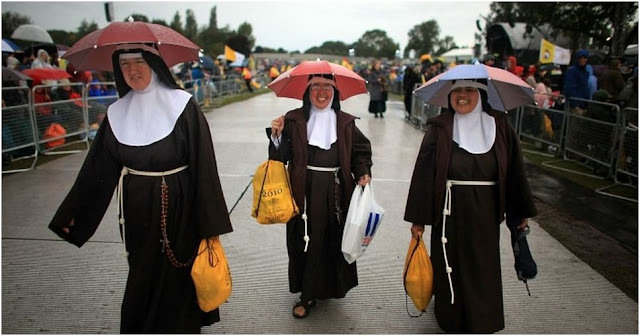 Some nuns on the way to the Beatification ceremony 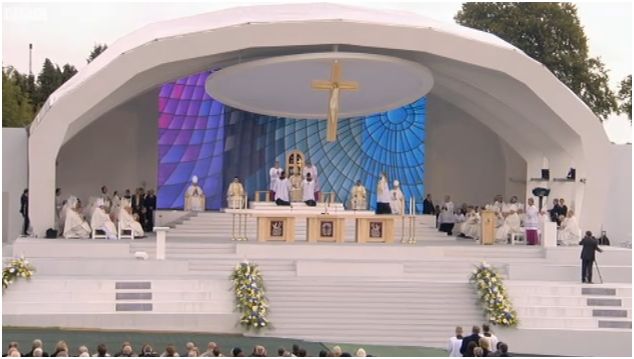 The start of the Beatification ceremony at Cofton Park 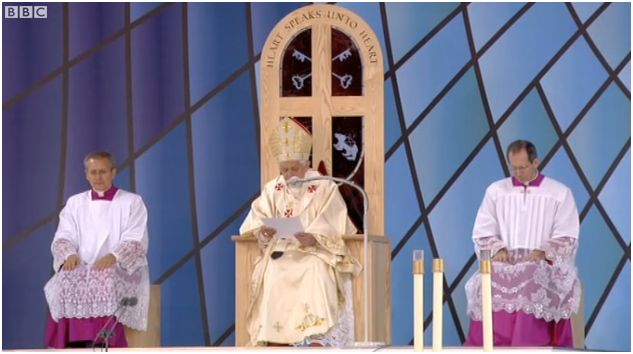 The Pope at the Ceremony of Beatification 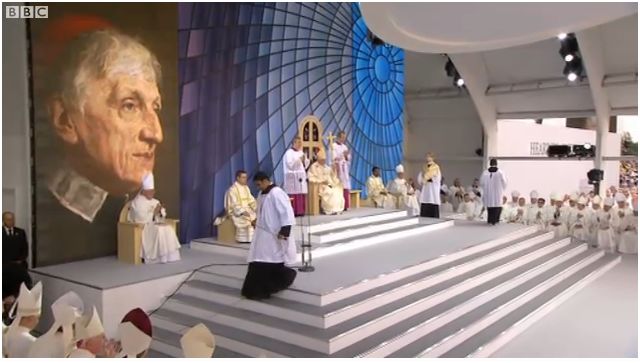 After Cardinal Newman was beatified 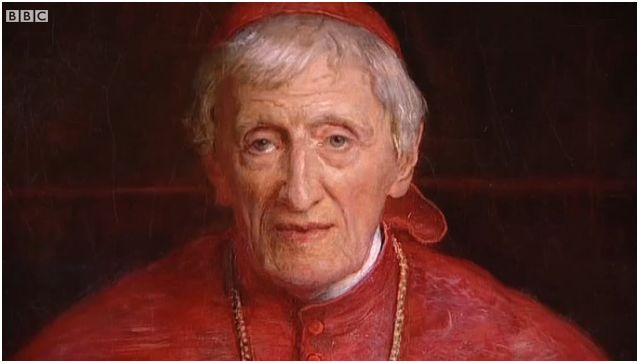 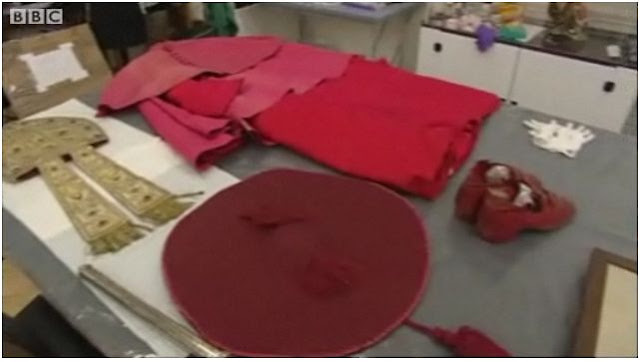 The cardinal`s robes, mitre and shoes of Cardinal Newman
Cardinal Newman is now beatified.
The above pictures illustrate parts of today`s joyful ceremony at Cofton Park, near Birmingham. Joyful and crowded despite the rain.
The last photograph shows some relics of the Blessed: his Cardinal robes, mitre and shoes.
In the space of less than 24 hours, the Pope has delivered three speeches on Cardinal Newman: one homily at last night`s vigil ceremony at Hyde Park, London; one homily at today`s Mass of Beatification; and a short salute at today`s Angelus.
His address at Hyde Park London on Saturday 18th September 2010 was as follows:

At the Mass of Beatification at Cofton Park of Rednal - Birmingham on Sunday, 19 September 2010, his homily was as follows:

"Dear Brothers and Sisters in Christ,
This day that has brought us together here in Birmingham is a most auspicious one.
In the first place, it is the Lord’s day, Sunday, the day when our Lord Jesus Christ rose from the dead and changed the course of human history for ever, offering new life and hope to all who live in darkness and in the shadow of death. That is why Christians all over the world come together on this day to give praise and thanks to God for the great marvels he has worked for us.
This particular Sunday also marks a significant moment in the life of the British nation, as it is the day chosen to commemorate the seventieth anniversary of the Battle of Britain. For me as one who lived and suffered through the dark days of the Nazi regime in Germany, it is deeply moving to be here with you on this occasion, and to recall how many of your fellow citizens sacrificed their lives, courageously resisting the forces of that evil ideology. My thoughts go in particular to nearby Coventry, which suffered such heavy bombardment and massive loss of life in November 1940. Seventy years later, we recall with shame and horror the dreadful toll of death and destruction that war brings in its wake, and we renew our resolve to work for peace and reconciliation wherever the threat of conflict looms.
Yet there is another, more joyful reason why this is an auspicious day for Great Britain, for the Midlands, for Birmingham. It is the day that sees Cardinal John Henry Newman formally raised to the altars and declared Blessed.
I thank Archbishop Bernard Longley for his gracious welcome at the start of Mass this morning. I pay tribute to all who have worked so hard over many years to promote the cause of Cardinal Newman, including the Fathers of the Birmingham Oratory and the members of the Spiritual Family Das Werk. And I greet everyone here from Great Britain, Ireland, and further afield; I thank you for your presence at this celebration, in which we give glory and praise to God for the heroic virtue of a saintly Englishman.
England has a long tradition of martyr saints, whose courageous witness has sustained and inspired the Catholic community here for centuries. Yet it is right and fitting that we should recognize today the holiness of a confessor, a son of this nation who, while not called to shed his blood for the Lord, nevertheless bore eloquent witness to him in the course of a long life devoted to the priestly ministry, and especially to preaching, teaching, and writing.
He is worthy to take his place in a long line of saints and scholars from these islands, Saint Bede, Saint Hilda, Saint Aelred, Blessed Duns Scotus, to name but a few. In Blessed John Henry, that tradition of gentle scholarship, deep human wisdom and profound love for the Lord has borne rich fruit, as a sign of the abiding presence of the Holy Spirit deep within the heart of God’s people, bringing forth abundant gifts of holiness.
Cardinal Newman’s motto, Cor ad cor loquitur, or “Heart speaks unto heart”, gives us an insight into his understanding of the Christian life as a call to holiness, experienced as the profound desire of the human heart to enter into intimate communion with the Heart of God. He reminds us that faithfulness to prayer gradually transforms us into the divine likeness. As he wrote in one of his many fine sermons,

“a habit of prayer, the practice of turning to God and the unseen world in every season, in every place, in every emergency – prayer, I say, has what may be called a natural effect in spiritualizing and elevating the soul. A man is no longer what he was before; gradually … he has imbibed a new set of ideas, and become imbued with fresh principles” (Parochial and Plain Sermons, iv, 230-231).

Today’s Gospel tells us that no one can be the servant of two masters (cf. Lk 16:13), and Blessed John Henry’s teaching on prayer explains how the faithful Christian is definitively taken into the service of the one true Master, who alone has a claim to our unconditional devotion (cf. Mt 23:10).
Newman helps us to understand what this means for our daily lives: he tells us that our divine Master has assigned a specific task to each one of us, a “definite service”, committed uniquely to every single person:

“I have my mission”, he wrote, “I am a link in a chain, a bond of connexion between persons. He has not created me for naught. I shall do good, I shall do his work; I shall be an angel of peace, a preacher of truth in my own place … if I do but keep his commandments and serve him in my calling” (Meditations and Devotions, 301-2).

The definite service to which Blessed John Henry was called involved applying his keen intellect and his prolific pen to many of the most pressing “subjects of the day”. His insights into the relationship between faith and reason, into the vital place of revealed religion in civilized society, and into the need for a broadly-based and wide-ranging approach to education were not only of profound importance for Victorian England, but continue today to inspire and enlighten many all over the world.
I would like to pay particular tribute to his vision for education, which has done so much to shape the ethos that is the driving force behind Catholic schools and colleges today. Firmly opposed to any reductive or utilitarian approach, he sought to achieve an educational environment in which intellectual training, moral discipline and religious commitment would come together. The project to found a Catholic University in Ireland provided him with an opportunity to develop his ideas on the subject, and the collection of discourses that he published as The Idea of a University holds up an ideal from which all those engaged in academic formation can continue to learn.
And indeed, what better goal could teachers of religion set themselves than Blessed John Henry’s famous appeal for an intelligent, well-instructed laity:

On this day when the author of those words is raised to the altars, I pray that, through his intercession and example, all who are engaged in the task of teaching and catechesis will be inspired to greater effort by the vision he so clearly sets before us.
While it is John Henry Newman’s intellectual legacy that has understandably received most attention in the vast literature devoted to his life and work, I prefer on this occasion to conclude with a brief reflection on his life as a priest, a pastor of souls.
The warmth and humanity underlying his appreciation of the pastoral ministry is beautifully expressed in another of his famous sermons:

“Had Angels been your priests, my brethren, they could not have condoled with you, sympathized with you, have had compassion on you, felt tenderly for you, and made allowances for you, as we can; they could not have been your patterns and guides, and have led you on from your old selves into a new life, as they can who come from the midst of you” (Men, not Angels: the Priests of the Gospel, Discourses to Mixed Congregations, 3).

He lived out that profoundly human vision of priestly ministry in his devoted care for the people of Birmingham during the years that he spent at the Oratory he founded, visiting the sick and the poor, comforting the bereaved, caring for those in prison. No wonder that on his death so many thousands of people lined the local streets as his body was taken to its place of burial not half a mile from here.
One hundred and twenty years later, great crowds have assembled once again to rejoice in the Church’s solemn recognition of the outstanding holiness of this much-loved father of souls. What better way to express the joy of this moment than by turning to our heavenly Father in heartfelt thanksgiving, praying in the words that Blessed John Henry Newman placed on the lips of the choirs of angels in heaven:

Praise to the Holiest in the height
And in the depth be praise;
In all his words most wonderful,
Most sure in all his ways!
(The Dream of Gerontius)."

At the recitation of the Angelus at Cofton Park on Sunday, 19 September 2010, his salutation again referred at length to Blessed John Newman this time with reference to his devotion to the Blessed Virgin Mary

"Brothers and Sisters in Jesus Christ,
I am pleased to send my greetings to the people of Seville where, just yesterday, Madre María de la Purísima de la Cruz was beatified. May Blessed María be an inspiration to young women to follow her example of single-minded love of God and neighbour.
When Blessed John Henry Newman came to live in Birmingham, he gave the name “Maryvale” to his first home here. The Oratory that he founded is dedicated to the Immaculate Conception of the Blessed Virgin. And the Catholic University of Ireland he placed under the patronage of Mary, Sedes Sapientiae.
In so many ways, he lived his priestly ministry in a spirit of filial devotion to the Mother of God.
Meditating upon her role in the unfolding of God’s plan for our salvation, he was moved to exclaim:

“Who can estimate the holiness and perfection of her, who was chosen to be the Mother of Christ? What must have been her gifts, who was chosen to be the only near earthly relative of the Son of God, the only one whom He was bound by nature to revere and look up to; the one appointed to train and educate Him, to instruct Him day by day, as He grew in wisdom and in stature?” (Parochial and Plain Sermons, ii, 131-2).

It is on account of those abundant gifts of grace that we honour her, and it is on account of that intimacy with her divine Son that we naturally seek her intercession for our own needs and the needs of the whole world. In the words of the Angelus, we turn now to our Blessed Mother and commend to her the intentions that we hold in our hearts."