The Gallery of the Candelabra: a Re-discovery of Pope Leo XIII 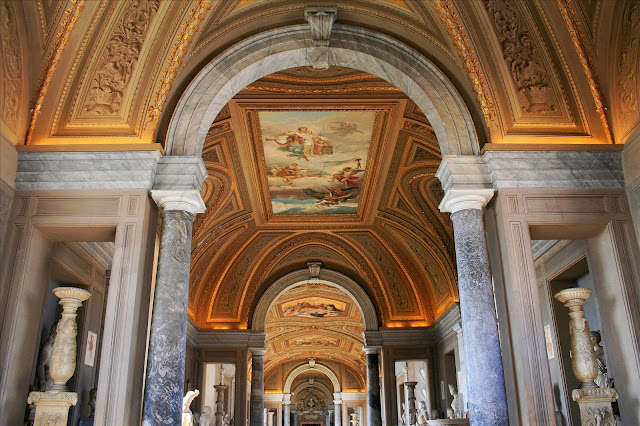 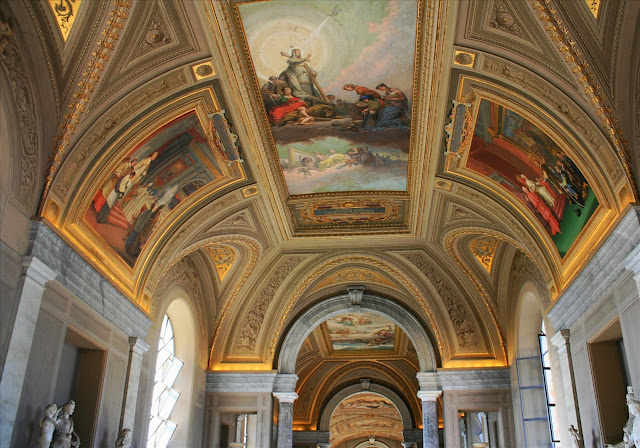 The Gallery of the Candelabra, Vatican Museums, Vatican City

Tourists being herded through the Vatican Museums will probably go through the long and narrow Gallery of the Candelabra, (262 ft. long) named after the eight magnificent candelabra of white marble within. The Gallery was commissioned and opened by Pope Pius VI in 1761
At present it contains many fine works of Roman antique sculpture.
Therefore the artwork on the walls and ceilings tend to go unnoticed. They blur into the myriad of ther beautiful and fascinating objects in view and as one`s concentration is disturbed by the jostling and movement of the crowd about.
The Gallery was restored by Pope Leo XIII in 1883-7
Pope Leo XIII commissioned the artist Ludwig Seitz (1844-1908) (Inspector of the Pontifical Galleries of Painting) and Domenico Torti for the frecoes on the ceiling (1883-87) and also on the walls (although various artists are responsible for the walls)
Torti is responsible for The Triumph of Truth over Falsehood. Inspired by Truth, History dictates to Re-nown the remarkable events of Time.
But it was Seitz, a German artist born in Rome and the Inspector of the Galleries of Paintings who is responsible for the longest and most important series on the ceiling.
They are all derived from the ideas of Pope Leo XIII and his desire that St Thomas Aquinas and his philosophy should have primacy in Catholic theology
In the middle of the ceiling, St Thomas is shown kneeling and offering his works to the Roman Catholic Church. Aristotle (representing Human Reason) is shown strengthened by the works of Aquinas. 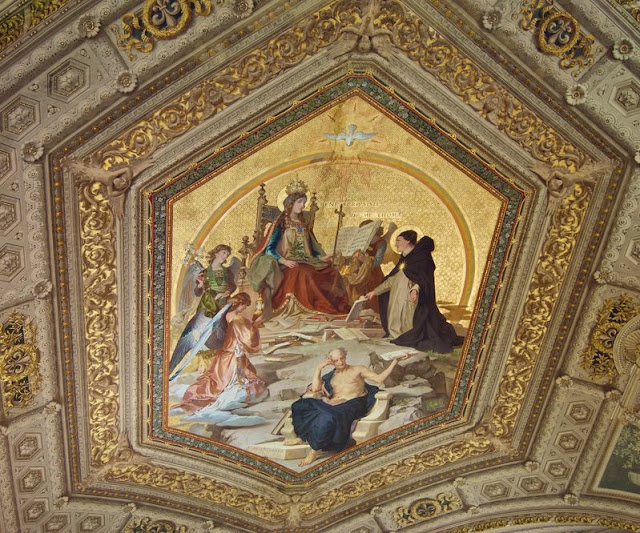 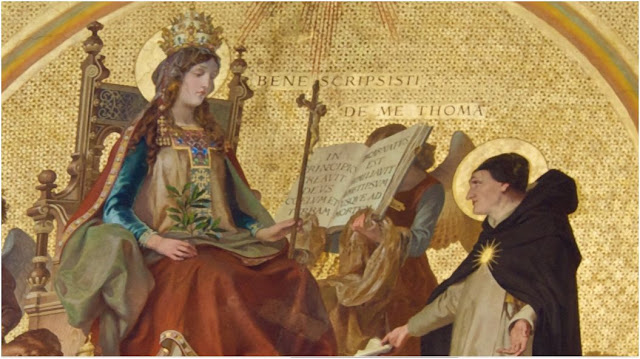 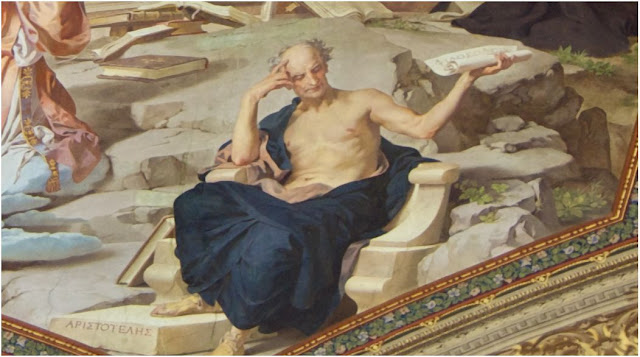 Another painting shows the Defeat of the Errors of the pseudo-philosophers. The hiersarchs are driven into the Dark Abyss at seeing the works of St Thomas shown to them by Angels in the same way as Dagon, the idol of the Philistines was detroyed by the presence of the Ark of the Covenant.
One of the beautiful allegories depicted is the Harmony between Faith and Science.

Ludwig Seitz (1844–1908),
Faith and Reason united, with St Thomas Aquinas teaching in the background and the inscription:
"divinarum veritatum splendor, animo exceptus, ipsam juvat intelligentiam", from Leo XIII's encyclical Aeterni Patris
Galleria dei Candelabri, Vatican
Source: Marie-Lan Nguyen at http://commons.wikimedia.org/wiki/File:Faith_Reason_Seitz_Galleria_dei_Candelabri.jpg
Another shows Divine Grace and Human Works exemplified by an Angel showing the Sun to an old Labouring man. Without the Sun, the labourer`s works are useless. Just as the Sun brings about the material works of man, Grace vivifies and sanctifies the works of the Spirit
Another the Union between Pagan and Christian Art.
The fourth depicts Victory giving to Man or Natural Means (a warrior kneeling and presenting his weapons to Victory) a Rosary to fight with gallantry against the enemies of Faith
More beautiful images of the Gallery can be found in Tealster`s photostream at flickr (including BTW the Coat of Arms of Pope Leo XIII - a most beautiful picture on the photostream)
Shortly before his trip to the United Kingdom on 5th September 2010, the Pope visited Carpineto Romano, the birthplace of Vincenzo Gioacchino Raffaele Luigi Pecci, who became Pope Leo XIII.
He celebrated Mass in Monti Lepini Square and delivered a lengthy sermon on the life and works of the Leo XIII
It is on the Vatican website here
Leo XIII was the oldest ever Pope and is perhaps best known for writing the Church's first great social encyclical, "Rerum Novarum." He also tried to reach out to the scientific world, founded centres of theological and Scriptural study, and opened the Vatican Archives to Catholic and non-Catholic researchers.
He was also the first Pontiff to promote ecumenical dialogue.
In the homily (which L`Osservatore Romano in a leading article by the Director described as important and as a "re-interpretation" of the works of Pope Leo XIII) the Pope said that Christians, acting within the reality of history,

“constitute a beneficial and peaceful force for profound change, favouring the development of the inner potential of reality itself. This is the type of presence and action in the world that is proposed by the social doctrine of the Church, which has always aimed at developing the conscience as a condition for valid and lasting transformations,”

He went on to say that because of this

“Leo XIII at a time of harsh anticlericalism and rabid demonstrations against the Pope was able to lead and support Catholics on a path of constructive participation, rich in content, firm on principles and capable of openness.”

However, proposing the social doctrine, stressed the current Pope, has as its foundation the fact that Leo XIII

“was a man of great faith and profound devotion. This always remains the basis of everything, for every Christian, even the Pope.”

Most importantly of all he said:

"Without prayer, that is, without inner union with God, we can do nothing, as Jesus clearly tells his disciples at the Last Supper (cf. Jn 15: 5)."

The present Pope also went on to discuss the duties of a Pope, priests, bishops and Pastors:

"Every Pastor is called to pass on to the People of God "wisdom" not abstract truths; in other words a message that combines faith and life, truth and practical reality. Pope Leo XIII, with the help of the Holy Spirit was able to do this in one of the most difficult periods of history for the Church by, staying faithful to tradition and, at the same time, measuring up to the great open questions. And he succeeded precisely on the basis of "Christian wisdom", founded on the Sacred Scriptures, on the immense theological and spiritual patrimony of the Catholic Church and also on the sound and crystal clear philosophy of St Thomas Aquinas, whom he esteemed highly and promoted throughout the Church."

He referred to three of the many Encyclicals of Pope Leo XIII. He of course referred to Rerum Novarum.
But he also referred to two others which are probably not so well known. Many who cite and praise Rerum Novarum to the heights might be rather surprised.
The first is Sapientiae Christianae (January 10, 1890) ("On Christians as Citizens")
It is a large work covering a wide range of topics on the subject of Church and State.
But perhaps two passages from it were in the Pope`s mind before his visit to Britain

"Nature did not form society in order that man should seek in it his last end, but in order that in it and through it he should find suitable aids whereby to attain to his own perfection.
If, then, a political government strives after external advantages only, and the achievement of a cultured and prosperous life; if, in administering public affairs, it is wont to put God aside, and show no solicitude for the upholding of moral law, it deflects woefully from its right course and from the injunctions of nature; nor should it be accounted as a society or a community of men, but only as the deceitful imitation or appearance of a society."

Later on in the Encyclical Leo XIII wrote:

"[T]he supernatural love for the Church and the natural love of our own country proceed from the same eternal principle, since God Himself is their Author and originating Cause. Consequently, it follows that between the duties they respectively enjoin, neither can come into collision with the other.
We can, certainly, and should love ourselves, bear ourselves kindly toward our fellow men, nourish affection for the State and the governing powers; but at the same time we can and must cherish toward the Church a feeling of filial piety, and love God with the deepest love of which we are capable. The order of precedence of these duties is, however, at times, either under stress of public calamities, or through the perverse will of men, inverted.
For, instances occur where the State seems to require from men as subjects one thing, and religion, from men as Christians, quite another; and this in reality without any other ground, than that the rulers of the State either hold the sacred power of the Church of no account, or endeavor to subject it to their own will.
Hence arises a conflict, and an occasion, through such conflict, of virtue being put to the proof. The two powers are confronted and urge their behests in a contrary sense; to obey both is wholly impossible. No man can serve two masters for to please the one amounts to contemning the other."

It also has rather stern words addressed to Bishops, priests and Catholic politicians.
Is Pope Benedict XVI trying to tell us something ?
The other encyclical of Pope Leo XIII which Pope Benedict referred to was Catholicae Ecclesiae, (November 20, 1890) (On Slavery)
Of this encyclical Benedict said:

"During a period in prison the Apostle [Paul] transmitted the faith to Onesimus, a slave originally from Colossae, after he had escaped from his master Philemon, a rich inhabitant of that city, and had become Christian together with his relatives, thanks to Paul's preaching. The Apostle now writes to Philemon asking him to receive Onesimus no longer as a slave but as a brother in Christ. The new Christian brotherhood overcame the separation between slaves and free men, and grafted on to history a principle of the promotion of the individual that was to lead to the abolition of slavery and also to surmounting other barriers that still exist today."

The Brotherhood of Christians is of course not a new theme in the theology of Pope Benedict XVI
The Pope`s Sermon at Carpineto Romano is an interesting example of his Hermeneutic of Continuity. It is an invitation to look at perhaps for the first time the theology of before Vatican II and by looking at past situations similar to the present, perhaps to discover ways forward from present difficulties.
Posted by Unknown at 3:14 pm