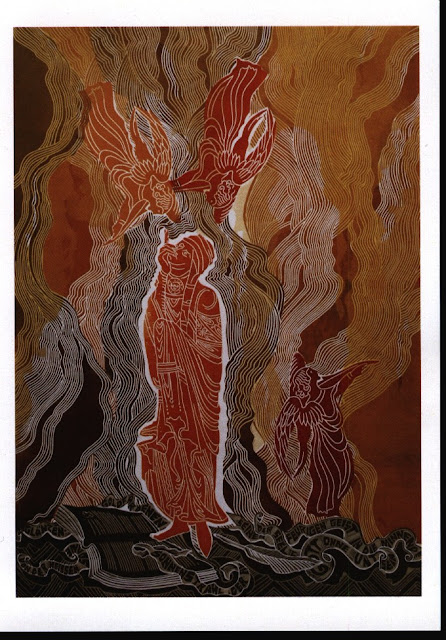 The Holy Father continued today his catechesis on medieval saintly women in German monasticism at the General Audience.
His talk is reported in Zenit
The subject of his talk was Saint Mechtilde of Hackeborn (1240/1241 – 19 November 1298)
She was formed in an intensely spiritual and intellectual atmosphere founded upon Sacred Scripture, the liturgy, and the patristic tradition.
Her mystical contemplation, enabled her to compose numerous prayers and be of counsel and consolation to many
She became the spiritual guide of Saint Gertrude the Great, another important figure of Germanic monasticism.
Her life of prayer led her to an intimate union with Christ, expressed in her devotion to his Sacred Heart
Here is the Holy Father`s talk:

"Dear brothers and sisters,
Today I would like to speak to you about St. Matilda of Hackeborn, one of the great figures of the monastery of Helfta, who lived in the 13th century.
Her religious sister, St. Gertrude the Great, in Book VI of the work "Liber specialis gratiae" (Book of Special Grace), in which are narrated the special graces that God granted St. Matilda, says thus:

"What we have written is very little compared with what we have omitted. Only for the glory of God and usefulness of our neighbor do we publish these things, because it would seem unjust to us to maintain silence about the many graces that Matilda received from God not so much for herself, it seems to us, but for us and for those who will come after us" (Matilda von Hackeborn, Liber specialis gratiae, VI, 1).

This work was written by St. Gertrude and by another sister of Helfta and it has a singular history. At the age of 50, Matilda was going through a grave spiritual crisis, together with physical sufferings. In these conditions she confided to two sister-friends the singular graces with which God had guided her since her childhood, but she did not know that they were writing it all down.
When she found this out, she felt profoundly anguished and troubled. But the Lord consoled her, making her understand that what had been written was for the glory of God and the good of her neighbor (cf. Ibid., II,25; V,20). Therefore, this work is the main source from which to obtain information on the life and spirituality of our saint.
With her we introduce ourselves to the family of the Baron of Hackeborn, one of the most noble, rich and powerful families of Thuringia, related to emperor Frederick II, and we enter the monastery of Helfta in the most glorious period of its history.
The baron had already given one daughter to the monastery, Gertrude of Hackeborn (1231/1232 - 1291/1292), gifted with an outstanding personality. [She was] abbess for 40 years, able to give a peculiar stamp to the monastery's spirituality, leading it to an extraordinary flowering as center of mysticism and culture, and a school of scientific and theological formation.
Gertrude offered the nuns high intellectual instruction, which enabled them to cultivate a spirituality founded on sacred Scripture, on the liturgy, on the patristic tradition, on the Cistercian Rule and spirituality, with particular predilection for St. Bernard of Clairvaux and William of St. Thierry.
She was a true teacher, exemplary in everything, in evangelical radicalism and apostolic zeal. Matilda, from her youth, received and enjoyed the spiritual and cultural climate created by her sister, adding later her personal stamp.
Matilda was born in 1241 or 1242 in the castle of Helfta; she was the baron's third daughter. When she was seven years old, she and her mother visited her sister Gertrude in the monastery of Rodersdorf. She was so fascinated by the environment that she ardently desired to be a part of it. She entered as a pupil and in 1258 she became a nun of the convent, which in the meantime had been moved to Helfta, on the property of the Hackeborn.
She was outstanding for her humility, fervor, kindness, purity and innocence of life, the familiarity and intensity with which she lived her relationship with God, the Virgin and the saints. She was gifted with lofty natural and spiritual qualities, such as "science, intelligence, knowledge of human letters, a wonderfully soft voice: Everything made her adequate to be a real treasure for the monastery in all aspects" (Ibid., Proemio).
Thus, "God's nightingale" -- as she was called -- though very young, became the director of the monastery's school, director of the choir, and mistress of novices, services which she carried out with talent and tireless zeal, not only for the benefit of the nuns, but for all those who wished to appeal to her wisdom and goodness.
Enlightened by the divine gift of mystical contemplation, Matilda composed numerous prayers. She was a faithful teacher of doctrine and had great humility; she was a counselor, consoler, a guide in discernment:

"She, one reads, "distributed doctrine with so much abundance as had ever been seen in the monastery and oh! we fear greatly that something similar will never be seen again. The nuns met with her to listen to the word of God, as they would a preacher. She was the refuge and consoler of all and she had, as a singular gift of God, the grace of revealing freely the secrets of each one's heart. Many people, not only in the monastery, but also strangers, religious and laymen, arriving from afar, attested that this holy virgin had freed them from their sorrows and that they had never experienced so much consolation as they did by her side. She also composed and taught so many prayers that if they were all collected they would surpass the volume of a psalter" (Ibid., VI, 1).

In 1261 a five-year-old girl named Gertrude arrived at the convent: She was entrusted to the care of Matilda, who was only 20, who educated and guided her in the spiritual life until she made of her not only her excellent disciple, but her confidant. In 1271 or 1272 Matilda of Magdeburg also entered the monastery. Hence the place received four great women -- two Gertrudes and two Matildas -- a glory of German monasticism.
In her long life spent in the monastery, Matilda endured constant and intense sufferings, to which she added the very harsh penances chosen for the conversion of sinners. In this way she took part in the Lord's passion until the end of her life (cf. Ibid., VI, 2).
Prayer and contemplation were the vital soil of her existence: the revelations, her teachings, her service to her neighbour, her journey in faith and in love have their root and context here.
In the first book of the work "Liber specialis gratiae," the writers gather Matilda's confidences indicated on the feasts of the Lord, of the saints and, especially, of the Blessed Virgin. Impressive is this saint's capacity to live the liturgy in its various components, including the simplest, bringing it into daily monastic life.
Some images, expressions and applications perhaps are distant from our sensibility but, if one considers monastic life and her task of teacher and choir director, one notes her singular capacity as educator and formator, who helped the sisters to live intensely, from the liturgy, each moment of monastic life.
In liturgical prayer Matilda highlighted particularly the canonical hours, the celebration of holy Mass, above all holy Communion. At that moment she was often raised in ecstasy in profound intimacy with the Lord in his most ardent and gentle heart, in a stupendous dialogue, in which she prayed for interior illumination, while she interceded in a special way for her community and her sisters.
At the center were the mysteries of Christ to which the Virgin Mary referred constantly in order to walk on the path of sanctity:

"If you desire true sanctity, stay close to my Son; he is sanctity itself who sanctifies everything" (Ibid., I, 40).

In her intimacy with God the whole world was present, the Church, benefactors, sinners. For her, heaven and earth were united.
Her visions, her teachings, the circumstances of her existence are described with expressions that evoke liturgical and biblical language. Hence one understands her profound knowledge of sacred Scripture, her daily bread. She takes recourse to it constantly, either savoring the biblical texts proclaimed in the liturgy, or using symbols, terms, landscapes, images and personages.
Her predilection was for the Gospel:

"The words of the Gospel were for her a wonderful nourishment and aroused in her heart feelings of such sweetness that often because of her enthusiasm she could not finish the reading. ... The way in which she read those words was so fervent that it aroused devotion in everyone. Likewise, when she sang in the choir, she was completely absorbed in God, transported by such ardor that at times she manifested her feelings with gestures. ... At others, raised in ecstasy, she did not hear those who called her or moved her and it was hard for her to recover the sense of exterior things" (Ibid., VI, 1).

In one of her visions, Jesus himself recommended the Gospel; opening to her the wound of his most gentle heart, he said to her:

"Consider how great is my love: If you want to know it well, you will not find it expressed more clearly anywhere than in the Gospel. No one has ever expressed stronger or more tender feelings than these: As my Father has loved me, so have I loved you (John 15:9)" (Ibid., I, 22).

Dear friends, personal and liturgical prayer, especially the liturgy of the hours and holy Mass, are the root of the spiritual experience of St. Mechthild of Hackeborn. Allowing herself to be guided by sacred Scripture and to be nourished by the Eucharistic Bread, she followed a path of intimate union with the Lord, always in full fidelity to the Church.
This is for us also a strong invitation to intensify our friendship with the Lord, above all through daily prayer and attentive, faithful and active participation in the holy Mass. The liturgy is a great school of spirituality.
Her disciple Gertrude describes with intense expressions the last moments of the life of St. Matilda of Hackeborn, very harsh, but illumined by the presence of the most Blessed Trinity, of the Lord, of the Virgin, of all the saints, and also of her blood sister Gertrude. When the hour arrived in which the Lord wanted to take her with him, she asked him to be able to live a bit longer in suffering for the salvation of souls, and Jesus was pleased with this further sign of love.
Matilda was 58 years old. She lived the last stretch of her journey characterized by eight years of grave illnesses. Her work and her reputation for holiness spread widely.

When her hour arrived, "the God of Majesty ... only sweetness of the soul that loves him ... sang to her: 'Venite vos, benedicti Patris mei' ... Come you blessed of my Father, come to receive the kingdom ... and he associated her to his glory" (Ibid., VI, 8).

"I greet you, O most venerated Virgin, in that most gentle dew, which from the heart of the Most Blessed Trinity was diffused in you; I greet you in the glory and the joy with which you now rejoice eternally, you who, preferred to all the creatures of earth and heaven, were chosen even before the creation of the world! Amen" (Ibid., I, 45) 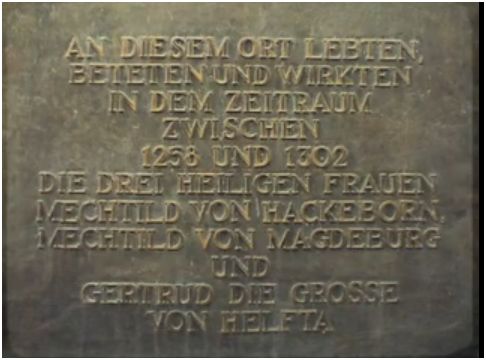 The Memorial Tablet at Helfta commemorating the Saints of Helfta

For more about St Mechtilde of Hackeborn see:
Wikipedia; Saint Mechtilde of Hackeborn (1240/1241 – 19 November 1298)
Catholic Encyclopedia (1913):St. Mechtilde
Helfta Monastery official website
Dom Donald`s Blog on Saint Mechtilde
DIVINE COMMUNICATION: MECHTILD OF HACKEBORN'S IMAGERY OF THE TRINITARIAN GOD by Pedersen, Else Marie Wiberg Magistra, Winter 2008
Mechtilde, who possessed a beautiful voice, was for many years chantress and chant-mistress at Helfta. For a video of the present Helfta Monastery convent and sisters see: