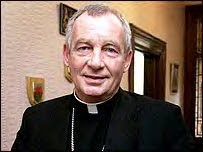 Reuters has reported that the Catholic Archbishop of Cardiff , Peter Smith, has said that politicians who vote in favour of abortion should not take communion.

He said he would not bar them from taking communion, but he would expect the politician involved not to seek it.

"The church's law is quite clear," Smith said. "A priest or bishop is not permitted to refuse communion unless it is quite clear that the person has been excommunicated or there is a very public rejection of church teaching."

But he went on: "The pastoral reality is, as the Pope has said recently in Mexico, that if a Catholic politician manifestly, clearly goes against the church's teaching, then they ought to remove themselves from receiving communion, because it would be a cause of great scandal."
Posted by Unknown at 12:17 pm