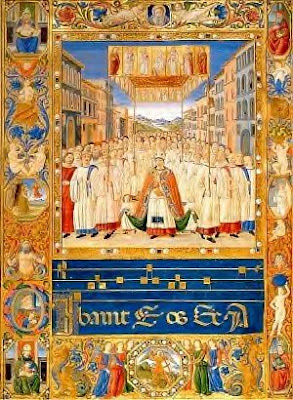 The practice was heavily criticised by the Protestant Reformation of the 16th century, and reformers with different beliefs about the Eucharist soon ended the celebrations in much of northern Europe.

Catholics, however, continued them with renewed zeal, and towns often competed to have the most elaborate or well-attended processions on the holy day of Corpus Christi.

Nowadays these processions pass without adverse comment.
Posted by Unknown at 8:04 am