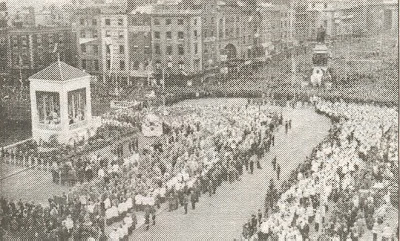 The Irish Independent reported that on 7th June 2007, the Archbishop of Dublin Diarmuid Martin led a Corpus Christi procession in the grounds of Clonliffe College to recall the glory days of the Eucharistic Congress held in Dublin 75 years ago.

"Slide shows around the grounds portrayed images of the congress in 1932, which was a popular highpoint for the prestige of the Catholic Church in an era when it wielded massive social influence.

The climax of the week-long congress saw one million people attend a Mass in Dublin's Phoenix Park which heard tenor John McCormack's rendition of Panis Angelicus.

This event, which was attended by the Papal Legate, Cardinal Lorenzo Lauri, put Dublin at the centre of the Catholic world. It is seen by historians as a moment which symbolised the bonding of Catholicism and Irish nationalism.

The first Fianna Fail Government led by Eamon de Valera, which came to power only months before the event, had arranged for Pope Pius XI to transmit a radio message from his apartment in the Vatican to the Irish people.

Dr Martin began the practice of holding a Eucharistic procession in the Clonliffe grounds on the Corpus Christi day two years ago during the 'Year of the Eucharist'. "
Posted by Unknown at 10:05 pm