Raphael: The Mass at Bolsena 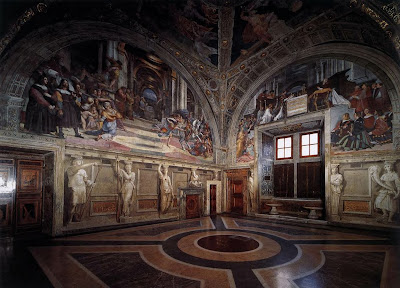 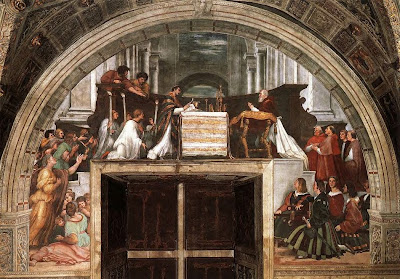 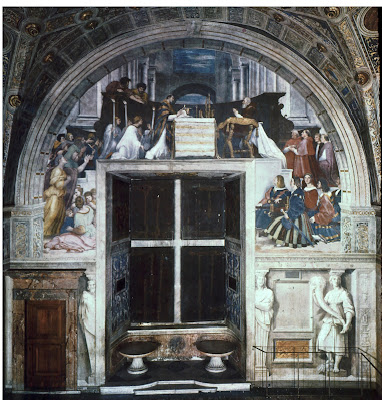 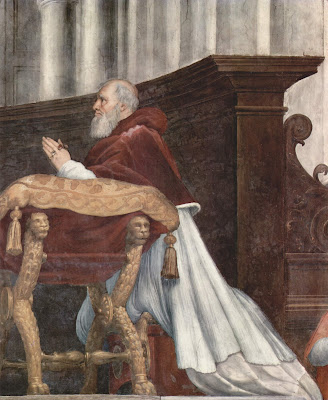 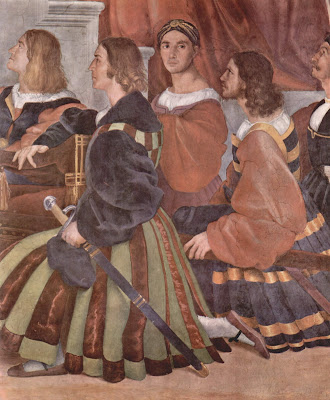 Raphael, or Raphael of Urbino, was born in Urbino on Good Friday 6 April 1483. He would have been familiar with the story and devotion attached to the Miracle of Bolsena.

The second room in the Vatican apartments which Raphael worked on was the Stanza di Eliodora, named after the main fresco The Expulsion of Heliodorus (c.1512), on which Raphael worked from September 1511 and June 1514. It was meant to be the public audience chamber. Accordingly the frecoes in the room are public symbols that rhetorically address a beholder so to persuade him to accept as true the papacy's desired self-image of its own historical mission

The general theme of the room is that of God's intervention in human destiny. The room's programme is political and aims at documenting, in different historical moments from the Old Testament to medieval history, the miraculous protection bestowed by God on the Church.

The fresco shows a massive crowd of people swept away by spiritual inspiration. Faith had been threatened. At the Fourth Lateran Council in 1215, the doctrine of transubstantiation was made a formal church teaching. This took place during the reign of Pope Innocent III. The Mass of Bolsena depicts an episode that took place in 1263. Urban´ IV`s idea of creating a feast entirely dedicated to the devotion of the Eucharist was cemented by the Miracle.

The priest, Peter of Prague, the protagonist of the event, is at the centre of the composition. The Pope is kneeling on the right hand side.

On 7 September 1506 Julius had stopped at the cathedral at Orvieto to see the relic of the cloth that was used to wipe the blood from the Eucharist, and thereby to demonstrate his personal connection with the miracle.

This miracle had a special meaning for Julius as he thought there was a link between it and his victory at Bologna. This fresco contains another political allusion: the liberation of the Church from its French and German enemies.

Julius II had convened the fifth Lateran Council. The fresco also celebrates the formation of the Lateran Council in May 1512, in response to the Council of Pisa which was seeking to depose him.

The fresco emphasises Julius' devotion to the Eucharist.

Pope Julius appears at the right of the scene, kneeling before the Eucharist. He is a symbol of ecclesiastical authority's presence during, and approval of, the miracle. The Pope's attendants stand one step below and behind him. They are cardinals Leonardo Grosso della Rovere and Raffaello Riario, Tommaso Riario and Agostino Spinola, his relatives and the chair bearers of the group. The papal Swiss guard representatives are on the bottom right.

Felice della Rovere (?1483-1536), the illegitimate daughter of Pope Julius II is the young lady dressed in black. As a cardinal, Julius II fathered three illegitimate daughters, Felice, Clarissa, and Giulia. From the marriage of the Pope's only brother, Giovanni, to the daughter and heiress of Duke Federigo of Montefeltro descended the dukes of Urbino. He made four members of the Della Rovere family cardinals.

In many ways, the fresco is a "political" and personal biography of the Pope.

Note the balancing of the solitary figure of the pope against the compact group of seven figures--a group that has to be carried up above the curved screen in order to counteract the importance given to Julius by his isolation and by the greater mass of his supporting group below.

The bleeding Host, the necessary centre of interest, is situated on a straight line drawn diagonally from the keystone of the arch to the centre of the window head, and almost exactly half-way between these two points, while the great curve of the screen leads to it from either side.