The Triumph of Caesar 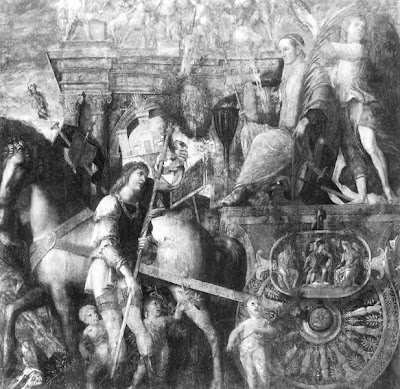 These superbly invented and designed compositions are gorgeous with the splendour of their subject-matter, and with the classical learning and enthusiasm of one of the master-spirits of the age.

They are considered Mantegna's finest work.

They were sold in 1628 along with the bulk of the Mantuan art treasures to King Charles I of England.

They are now in Hampton Court Palace, somewhat faded, but many repaintings have been removed in a recent restoration.

They depict the celebratory military parade of Julius Caesar.

The series depicts Caesar on a triumphal chariot returning from his successful campaigns, in a procession of Roman soldiers, standard-bearers, musicians and the spoils of war including an assortment of booty (including arms, intricate sculpture and gold vases), exotic animals and captives.

Even Oliver Cromwell did not sell these paintings.

The canvasses are entitled:

The images can be viewed at The Royal Collection website
Posted by Unknown at 9:21 pm