The Church of St. Cristina in Bolsena 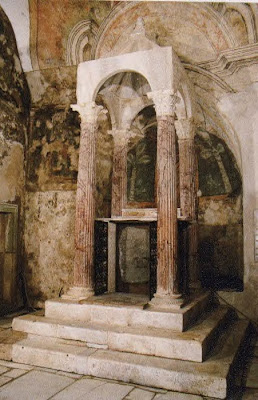 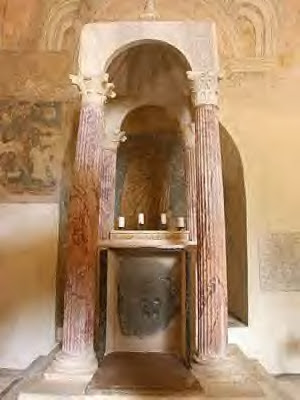 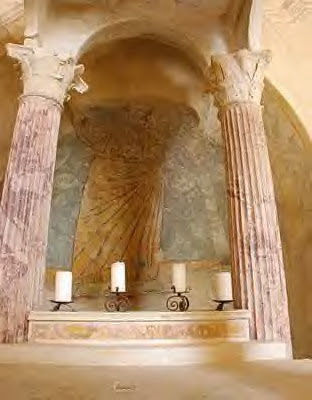 The Altar at S. Cristina where the Miracle of Bolsena took place 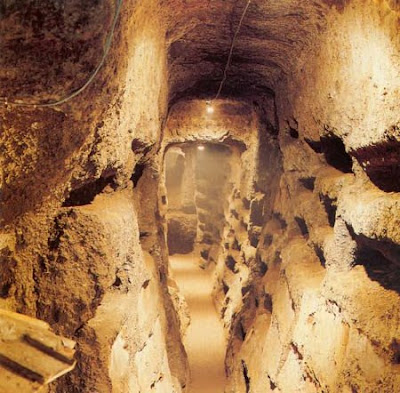 Catacombs of the 4th and 5th centuries underneath S. Cristina 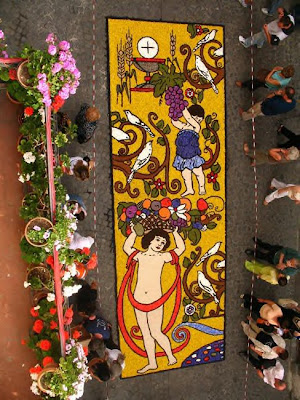 Infiorata for Corpus Christi at Bolsena 2006

The town of Bolsena on the shores of Lake Bolsena in Lazio has a particular devotion to the Eucharist and the feast of Corpus Christi.

In 1263 a Bohemian priest, Peter of Prague, troubled by doubts about the doctrine of transubstantiation, started out on a pilgrimage to Rome. On his way he celebrated mass at the Church of St Cristina in Bolsena. During the consecration the Eucharist began, miraculously, to bleed. Each time he wiped the blood away with a cloth a cross of blood would reappear on the Host, a miracle that swept away the priest's doubts.

The drops of blood fell on the marble.

Both the marble and the corporal were kept at the Church of St Cristina until they were moved to the Cathedral at Orvieto.

In August 1264, Pope Urban IV by means of a papal bull instituted the feast of Corpus Christi.

When the new feast was added to the Church calendar in 1264, St. Thomas Aquinas wrote the liturgy for it.

Word-made-Flesh, the bread of nature
by His word to Flesh He turns;
wine into His Blood He changes;-
what though sense no change discerns?
Only be the heart in earnest,
faith her lesson quickly learns.
(The fourth stanza of the "Pange Lingua")


For the Pange Lingua, (Sing My Tongue) see:
http://www.preces-latinae.org/thesaurus/Hymni/Pange.html
Posted by Unknown at 9:26 pm