A Portrait of the Artist 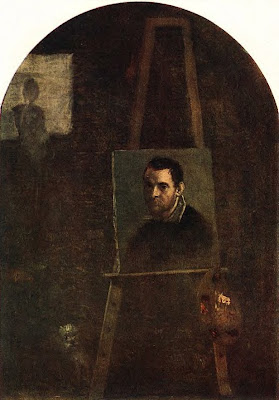 Carracci made this self portrait aged about 44, five years before his death at the young age of 49.

He was one of the prominent members of the Carracci family who were important figures at the end of the 16th century in the movement against the prevailing Mannerist artificiality of Italian painting.

He, with other members of his family, followed the Tridentine strictures on art.They are now labelled Baroque although Annibale`s style is more eclectic and cannot be categorised so easily as under a single label.

Until the 19th century, the Farnese Ceiling was ranked alongside the Sistine Ceiling and Raphael's frescos in the Vatican Stanze as one of the supreme masterpieces of painting. It was enormously influential.

His stock has now risen and he is now recognised again as one of the great Italian artists.

The end of Carracci`s life was not happy. Around 1606, he appears to have been stricken by some kind of depression and gave up painting around this time.
Posted by Unknown at 9:32 am