The Temptation of St Anthony 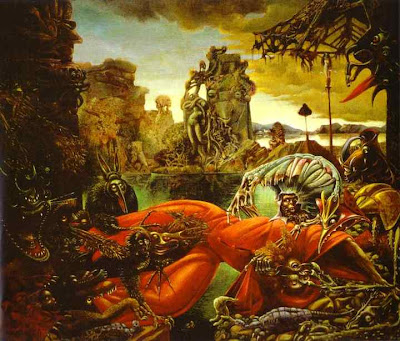 Max Ernst never received any formal artistic training. In 1910-1914 he studied philosophy and psychiatry at Bonn University and took a deep interest in painting.

He became a Dadaist and Surrealist. In 1937 Ernst distanced himself from Breton and the Communist group of Surrealists.

While resident in Paris, he was arrested by the Gestapo, after the French occupation by the Nazis but managed to escape and flee to America with the help of Peggy Guggenheim, a sponsor of the arts.

The Temptation (or Temptations) of St. Anthony is an often repeated subject in history of art.

Anthony was born in Egypt in the middle of the third century to wealthy parents. They died when he was about twenty. He inherited all their belongings but soon gave them up to lead a life of asceticism. He joined a group in the lower Nile and later moved further into the desert for complete solitude. He found an old fort and shut himself in.

During this time alone Anthony was tempted many times. He resisted by fasting, consciousness altering meditation, going without sleep and by beating himself. People brought him food which they threw over a wall of the fort. Some came to visit but he refused to see them. Other ascetics were so impressed by him that they set up huts nearby. Eventually he came out and appeared quite healthy.

He talked about his experience for a few years, describing the demons and beautiful women offered to him. But he succeeded over the weakness of the flesh with his willful spirituality. He went back to the desert again and moved into a cave on a mountain where he lived until his death. He received visitors who made the trip to see him and learn from him. A monastery was built at the same site.


The theme was first presented in the 10th century at Italian fresco paintings.

The Temptation of St. Anthony by Hieronymus Bosch is an oil painting on wood panels. The centre panel measures 131.5 by 119 cm, and the wings measure 131.5 by 53 cm.

The painting currently hangs in the Museu Nacional de Arte Antiga, in Lisbon

In Bosch`s painting, Symbolism tells the story of Anthony’s mental and spiritual torments throughout.

Bosch was preoccupied with themes of torment and the sinfulness of man, which replaced earlier, more optimistic visions of Christ and the Virgin with feelings of anxiety, fear, and guilt.

Bosch`s painting can be accessed here

Ernst`s painting was painted after the Second World War when the full scale of the horrors perpetrated in the War were made visible due to photography, movie film, newspapers and government revelations.

Ernst's Satan was easy to recognize: he looked like everything that Ernst feared most.

Bosch`s surreal visions derived from his imagination and his religious conviction.

For the painting, Ernst was the $3,000 prizewinner in a "Temptation of St. Anthony" contest. The sponsors of the contest had persuaded twelve Modern Artists to paint what Anthony saw. Ernst's winning picture was used in a movie, Bel Ami or The History of a Scoundrel, starring George Sanders and having nothing to do with Anthony. Runners-up included Belgian Paul Delvaux; Ivan Le Lorraine Albright; and Salvador Dali, for a desert caravan of spider-legged elephants.

For Dali`s picture, see here.
Posted by Unknown at 4:53 pm