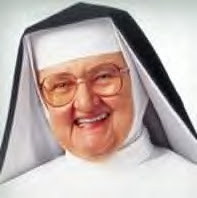 Some in Britain and Europe may not have heard of Mother Angelica of EWTN.

Zenit provides an interview with her biographer, Raymond Arroyo,director of EWTNews and host of "The World Over," .

For those who do not know about Mother Angelica, here is a snippet of the interview:

"Q: Mother Angelica is not a stereotypical nun and your biography makes this clear. In what ways do you think her particular feminine genius can inspire others?

Arroyo: Mother is definitely not a stereotypical nun. She appears stereotypical, but beneath the habit is this gutsy, determined woman who wields an incredible faith.

Her feminine genius resides just there I think: in her radical faith, in her abandonment to God's will in the present moment. Additionally, she had an intuition that allowed her to see events as they were and to follow her heart and God, always.

We need that feminine aspect in the Church today. Mother used to say that the faith had become too "heady," too theoretical. And I think she is right.

In the new book she says, "Most people today are seeking master's degrees, then they forget the Master." She never forgot her Master.

Isn't it curious that some of the same people who were the most outspoken advocates of "women's power" in the Church, were the first ones trying to shove Mother Angelica back into the cloister once she appeared on the scene?

The idea of an orthodox, faithful woman leading people to Christ was a threat somehow. It shouldn't have been. Time has shown that it was actually a blessing.

Q: How would you describe Mother Angelica's spirituality?

Her style was always very practical, and easily applicable to the lives of her listeners. She grew up on the streets of Canton, Ohio, among poor, working class immigrants.

Those are the people she attempted to reach, whether in person or on television. But buried in her funny, earthy approach was always the profound wisdom of the Church.

She used to say, "If you have two legs and you're breathing --you're called to holiness, sweetheart." And people believed her. She didn't teach theology, she taught people to be more like her Spouse.

She held that living example of Jesus up for the world to see and dared all comers to try to match it. The reason she remains relevant is that people can't turn away from her directness, her passion and her lovable humor.

I mean, how many nuns do people know who describe the eternal judgment to intimates this way: "Everyone drags his own carcass to market, so be careful." `
Posted by Unknown at 5:22 pm