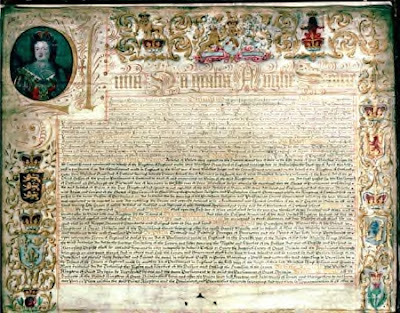 There are many prohibitions in the law regarding this. The statutes are regarded as constitutional statutes and difficult to amend or even repeal without opening up even more difficult questions as regards the constitution.

Article II of the Treaty provided that the monarchy was to be Protestant and stated that papists and persons marrying papists were to be “excluded from and for ever incapable to inherit” the Imperial Crown of Great Britain.

The Protestant Religion and Presbyterian Church Act 1706, is incorporated in the Treaty by the ratifying Acts of the old Scottish and English Parliaments , and is stated to be not capable of amendment or repeal.

In The Union and the law by David Walker the former Regius Professor of Law in the University of Glasgow from 1958-1990 explains the difficulties from a legal point of view of trying to amend the Act and Treaty of Union and in particular those clauses dealing with the religion of the Monarch and his/her family.
Posted by Unknown at 5:59 pm

Email ThisBlogThis!Share to TwitterShare to FacebookShare to Pinterest
Labels: act and treaty of union