The Tree of Jesse 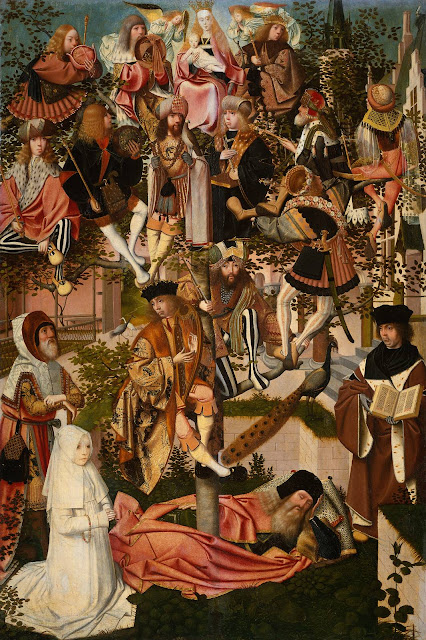 At the bottom there is an old man from whose abdomen grows a huge tree.

The old man is Jesse, ancestor of the royal house which traditionally produced the likes of Solomon, David and Christ.

Sitting on the branches of the tree are Jesse's descendants.

At the top of the tree, the very crown, is the Virgin Mary with her child on her lap and surrounded by angels

Included are the twelve kings of Israel, from David on the lowest branch, to Manasseh, top right. David is recognisable with his harp. He was the son of Jesse.

Isaiah 11, verse 1 reads: 'And there shall come forth a rod out of the stem of Jesse, and a branch shall grow out of his roots'

Isaiah 11:10 reads:`On that day the root of Jesse shall stand as a signal to the peoples; the nations shall inquire of him, and his dwelling shall be glorious`

See also Romans 15:12 which reads: `And again, Esaias saith, There shall be a root of Jesse, and he that shall rise to reign over the Gentiles; in him shall the Gentiles trust`

The rod of the tree of Jesse is seen as the Virgin Mary. The branch is Christ

The young patron kneeling in devotion who commissioned the painting is beside the tree of Jesse. She would appear to be a white nun from the Haarlem convent of Magdalenes or 'white sisters'.

The Jesse Tree has been depicted in almost every medium of Christian art. In particular, it is the subject of many stained glass windows and illuminated manuscripts. It is also found in wall paintings, architectural carvings, funerary monuments, floor tiles and embroidery.

December 19th is when O Radix Jesse (O Root of Jesse) is used as the O Antiphons. The O Antiphons are used at daily prayer in the evenings of the last days of Advent. The Antiphons were sung at Vespers before and after the Magnificat.

the kings of the earth are silent before you (Isaiah 52:15) and the nations invoke you: