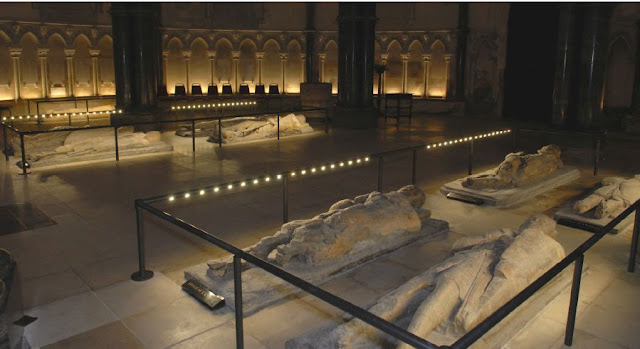 700 years ago the Order of the Temple was in turmoil, its members under arrest, and its Grand Master soon to be burned at the stake. Its main church in England, at the New Temple in London, survived the suppression of the Order in 1312, and escaped (by a whisker) the Great Fire of London in 1666, only to be ravaged by fire during the Blitz in 1941.

Nevertheless, it remains one of the most important surviving medieval monuments in London, with superb late Romanesque sculpture, luminous early Gothic architecture, a magnificent series of medieval monuments, and major post- Reformation furnishings by Sir Christopher Wren and others

Unfortunately in recent times it has also been the setting of a number of "novels" and bizarre so-called "non-fiction" books which pass off as genuine strange and untrue theories about secret places, hidden history and gnostic ideas.

The name "Dan Brown" comes to mind. However he is one of many.

Zenit reports on a new book "Secret Places, Hidden Sanctuaries." by Stephen Klimczuk and Gerald Warner which debunks the falsehoods in "The Da Vinci Code" and other such works.

"Q: Why do you think secret places have found such a niche in our culture? Is there something particular about our era, such as more information because of the Internet, or is this a timeless interest?

Klimczuk: This interest in secret places, hidden history and gnostic ideas is not a passing fad -- it is likely to with us in even further strengthened form in the years and decades to come.

When you combine rapid societal change and disorientation, the natural, perennial human hunger for the spiritual, and a low standard of religious and historical literacy, this is what you get. One might even say that it is the world's fastest-growing "industry."

Benedict XVI's emphasis on restoring the beauty, integrity and richness of the liturgy is one way of responding to a world hungering for something genuinely satisfying.

We think of the words of Father Walton Hannah, a Church of England clergyman who emigrated to Canada in the late 1950s and became a Catholic priest: "[given the elimination of] most of the color, glamour, and ceremonial from Christian worship, ... When the soul is starved of these elements in religion, it will naturally tend to compensate itself in less desirable ways."

Warner: Humanity's need for the numinous cannot be denied. The dubious quotation often attributed to G.K. Chesterton -- that when man ceases to believe in God he does not believe in nothing, but will believe in anything -- is sadly true."