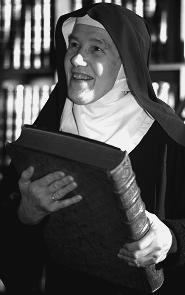 Dame Maria Boulding was a nun and author. She was in an enclosed Benedictine Order. She had been in the convent for 62 years.

Despite the enclosure, she managed to have a great (but quiet) effect on the life of the Church.

You might have heard of her from her translations of the works of St Augustine.

"The 4th-century Desert Father Evagrius defines a monk as one who is separated from all, yet joined to all. Dame Maria Boulding, the enclosed Benedictine nun whose life and writings have touched thousands across the globe, epitomised this monastic ideal. There was something of the Desert Elder in her: short, spare and vigorous, single-minded in her search for truth, and uncompromising, she could look rather forbidding until a radiant smile transformed her whole being. The feminine side of Boulding grew more pronounced over the years, lending a rare beauty to what might otherwise have been a manly mien.

She was born in 1929 in London and baptised Mary, the eldest daughter of Reginald Boulding, a radar specialist, and Josephine née Branney. On the death of her mother, Mary, while still a schoolgirl, found herself responsible for four siblings. She sensed a call to the contemplative life at 16 and was accepted by Stanbrook Abbey, Worcester, soon after her 18th birthday. Then came an offer of a state scholarship to the University of Oxford, which she turned down to pursue her vocation.

She entered Stanbrook in 1947. Silence, scripture and community demands would form the context of her life for the next 62 years, while its contours were inextricably bound up with the Cross and Resurrection of Christ: the Paschal Mystery. She took solemn vows in April 1952 when she was 22.

The malaise which followed — clearly more than the normal “post-vows blues” — was put down to insufficient intellectual stimulation and remedied by theological study (as an external student of the University of London) which laid the foundations for her lifelong commitment to study.

Boulding embraced the changes of the Second Vatican Council with enthusiasm. Resonating deeply with the Church as servant and pilgrim, she welcomed the rediscovered scriptural focus of the council documents.

Her middle years were full. The office of novice mistress, which she held from 1965 to 1974 gave her the chance to use her intellectual gifts and transmit her love of the monastic life to others, but she could lack discernment and confessed herself “heartily glad” to be relieved of the job. Increasingly, she came to see her vocation in terms of communicating the Word of God. Blessed with a beautiful speaking voice (Alec Guinness had given her lessons in public reading at Stanbrook), she would insist when instructing readers: “Your job is to keep out of the way and let the Word speak.”

But it was via the written word that she really made an impact. Her literary gifts came to the fore in the writing and editing of Consider Your Call (1978), a collaborative effort of the English Benedictine Congregation’s Theology Commission, of which Boulding was a member, to articulate a theology of monastic life. Important at the time, and still useful for reference, this book is now out of print and seems dated. Not so the spate of publications which flowed from Boulding’s pen from 1979 to 1985, all of which are still in demand: Marked for Life: Prayer in the Easter Christ (1979); The Coming of God (1982) and Gateway to Hope (1987).

Difficult to classify, these are popular in the best sense. Thoroughly biblical, theologically sound and informed by the liturgy and personal prayer, their appeal seems to lie in the way they combine depth and universality with a tone that is both personal and affective, recalling that of medieval Cistercian Fathers.

Enclosure, a discipline Boulding valued highly as an aid to prayer, precluded her accepting many an invitation to give talks that followed these publications. An exception was made in 1980, the year of celebrations for the 15th centenary of St Benedict’s birth, when she made a six-month lecture tour of Australia and Japan.

At the height of this fruitful period, and perhaps because of it, she sensed a call to deeper solitude and was given permission to live as a hermit from January 1985. These were halcyon days, spent in the company of her dog and cat, when her outstanding attributes of self-discipline, courage and capacity for hard work were stretched to the full. The chance to participate in an Augustinian project to translate the works of St Augustine for the 21st century seemed heaven-sent. Her translation of The Confessions, widely acclaimed, is on its ninth reprint, while between 2000 and 2004 six volumes covering Augustine’s Commentaries on the Psalms appeared.

Returning to Stanbrook full-time in 2004, Boulding slipped back into the monastic round and threw herself into the task of packing up the library of more than 40,000 books in preparation for the community’s move to Yorkshire. Just at a time when she might have expected life’s demands to tail off — she was 75 — she was appointed to the Roman Missal Editorial Commission (RMEC) to work on translations of the texts of the new missal, a labour that involved frequent meetings with her episcopal colleagues in Rome, the US and England. Boulding had always thrived in such male-dominated environments and her contributions and presence were likewise much appreciated. Her translation of the Easter Vigil’s Exsultet has been described as a masterpiece. This work for the RMEC, and her appointment by the Vatican to a committee to look at the prayers of the Divine Office in 2008, marked the crowning of her life’s work for the Church. Yet when the diagnosis of terminal cancer came in Lent this year she seemed to view that as one more job to be done, refusing all but palliative treatment.

An early publication of hers, Are Contemplative Nuns Wasting Their Time? (1973) could be answered by the briefest perusal of her achievements, but even more eloquently by her person: she was an excellent advertisement for the monastic life and not only because she was regularly taken to be 25 years younger than her age. No one was more inspiring to newcomers or prospective candidates. She was a splendid example of the breadth and depth of human formation that the Benedictine life can produce.

Within the community, while she enjoyed a strong personal authority, born largely of her fierce integrity, she had difficulties in relating to others in any but a mentoring role. Boulding did not waste words and scorned small talk. Yet she was deeply loved and, especially during her last illness, came to accept that love more readily.

In A Touch of God (1982), the book of monastic journeys she edited, her autobiographical chapter called “A Tapestry from the Wrong Side” attempts to explain how life’s apparent messes probably look quite different from God’s side. But it is an image which can perhaps help to understand the mystery of community life: that somehow, and without duplicity, the public face of a person is fashioned from the struggles, knots and loose strands of the domestic scene.

Boulding’s call to proclaim the Word as a John the Baptist, and to receive the Word as a Mary, seem to meet in Wisdom — providentially the book of Scripture that was being read at Mass in the days before her death and which seemed to be an uncanny portrait of Boulding at her best: In Wisdom there is a spirit intelligent, holy, unique, manifold, subtle, active, incisive, unsullied, lucid (Wisdom 7:22).

Three days before she died, Boulding completed Journey to Easter, a series of meditations on her experience of the Resurrection through pain and suffering. It is to be published by Continuum.

There are no doubt many religious like Dame Maria Boulding quietly working away in the practice of their vocation of strong and sterling character and integrity. Their courage and their faith is breath taking. It is a pity we do not hear more about them. It is also a pity that it is often the bad and the third rate who grab the headlines.