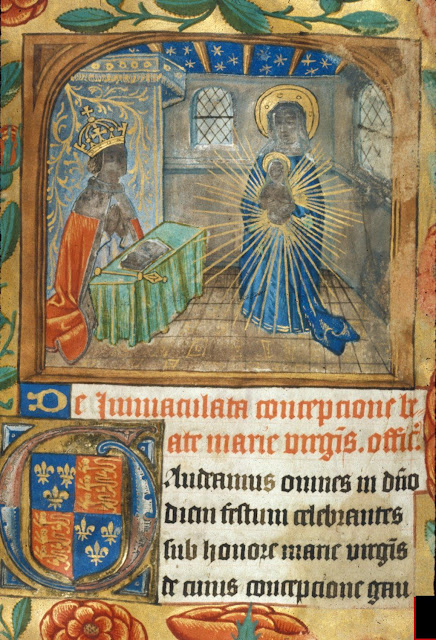 Miniature of the Immaculate Conception and of Henry VII kneeling, with the trompe l'oeil border, and an illuminated large initial with the royal coat of arms.

From the Office of the Mass for the Immaculate Conception

Before the Norman Conquest in 1066, Anglo-Saxon celebrated the Feast of the Immaculate Conception. However, under the Norman Archibishop of Canterbury Lanfranc (c. 1005–1089) the celebration of the Feast was abolished in the latter part of the eleventh century. After some time it was reinstated. It eventualy thrived at all levels of Society as can be seen from the above miniature

"In former days it was celebrated more commonly than now, and by those chiefly in whom there dwelt a pure simplicity of soul and a humble devotion. But when learning of a wider range and an all-dominating tendency to enquire into the reasons of things had imbued and lifted up the minds of some, this new learning, contemptuous of the simpleness of the poor in spirit, did away with this solemnity; and, banished it utterly as wanting in reasonableness. And the view entertained by these persons had such irresistible force because they were pre-eminent in both Church and State, and were the wealthy ones of the land. But when I considered within myself the simple-mindedness of the men of earlier days and the eminent genius of the moderns . . . And thus those acute and able persons, in virtue of their position of authority on which they prided themselves, did not scruple to abolish what the simple and perfect love of our Lady, that had animated those of old time, had established; namely, the feast of her Conception. Having thus seen the mode of proceeding of the eminent persons who succeeded in doing away with the feast of the Mother of God, let us cast a glance at the love of the simple folk who lament over the loss of so great a gladness."