The Art of Desecration 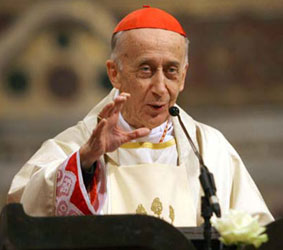 Recently there was a a three-day conference in Rome "God Today: With Him or Without Him, That Changes Everything".

It successfully brought together leading theologians, philosophers, artists, politicians and Church leaders to discuss, rationally and calmly, the importance and relevance of God to people's daily lives.

An estimated 2,500 people -- many of them young people -- filled the auditorium near the Vatican, despite some secularists predicting they would never turn up.

It was chaired by Cardina Camillo Ruini. It was sponsored by the Italian Conference of Bishops and the Rome City Council. Can you imagine any Council in the United Kingdom sponsoring such an event ?

One of the conference speakers was the renowned English philosopher, writer and composer, Roger Scruton.

Zenit reports on an interview with him:

"The essence of Scruton's talk was how, until relatively recently, artistic creation of beauty was about giving glory to God, but now is often about desecrating the human form. He explored the reasons why.

"Artists in the post enlightenment period tried hard to hold on to the idea of beauty precisely to compensate for the loss of their faith," he explains.

"Then suddenly in our time, since the 1960s and all the rest, we have a new kind of art which is repudiating beauty and putting ugliness in its place," Scruton explains. "I'd say it's an 'art of desecration' which looks not to desecrate beauty, but to desecrate the human form."

He refers to "the examples of the usual young British art types" such as Damian Hirst, and in particular the conceptual artists Jake and Dinos Chapman, two brothers whose work Scruton describes as "particularly repulsive."

"So I asked myself: What does this mean? Why should people want to desecrate the human form and the ordinary ideals of human life? And I say, you only desecrate what is sacred. Only something sacred can be desecrated. So there's this cry from the heart here for the religious meaning of things. It's showing the yearning for God and the sense that these things make no sense without him."

He adds that we have "lost all that idea that beauty is something we create together by way of embellishing our world."

In the past, Scruton has pointed to the difficulties of proving "the truth of religious sentiments." He is well aware of the challenges, having debated the well-known atheists Richard Dawkins and Christopher Hitchens in the past.

So how can Christians find a better way of communicating the truth of the faith in the world today?

"Intelligent people don't see a problem in seeing that there can be truths which lie beyond the reach of scientific argument and there can be truths whose content was only revealed through a way of living – that's the task of theology and philosophy, to make that clear," he says. "But ordinary people don't see religion in that way. For them it's a matter of basic certainties. Certainties are very hard to rediscover once they've been lost."

I ask how the faith could be brought back to Britain which appears to be in desperate need of a return to its Christian roots. Just this week a survey revealed that only half of Britons now consider themselves Christian after a "sharp decline" in religious belief over the past quarter of a century.

"To re-evangelize the English, you'd need a new Augustine [of Canterbury]," Scruton replies.

But he warns that if the Christian faith has vanished completely from Britain, then that leaves a vacuum into which another faith will flow.

"The Christian faith might flow back but then it's in competition with all the other things that might flow in: the New Age type religions, Hinduism, and Buddhism. There may be a complete fragmentation as under the late Roman Empire: before Christianity took over, there were thousands of little cults. But, of course, Islam will then have a big following because it will be the only thing that establishes a unity."

I put it to him that perhaps the Pope's expected visit to Britain next year, the beatification of Cardinal John Henry Newman and the new provisions for disaffected Anglicans point to some urgency toward the re-evangelization of the country. "Yes, that might be a possibility," he says, adding that a general election is also expected in 2010. "Maybe we'll see a wholesale conversion of the English to their faith."

We then turned to today's prominent atheists and the best way to debate them. "You've got to have the right people up against them," he says. "You need people who are stronger and wittier than they are in an argument. You have to get the right audience as well."

He says he doesn't mind debating people like Dawkins and Hitchens. "The problem is what I have to say doesn't directly confront what they have to say," he says. "There's nothing in what Dawkins says that I can actually disagree with -- it's just that it leaves out half of life. He talks perfectly reasonably about the explanation of human life, but not about its meaning."

Although an Anglican, the philosopher is particularly sympathetic to Benedict XVI's stand against what Scruton calls the vandalism of the liturgy and the musical traditions of the Church.

"That resonates with me," he says. "I've felt it was so unnecessary giving way to temporary fashions which have now disappeared. But now the Church has to work to rediscover what it could have had without working for it."