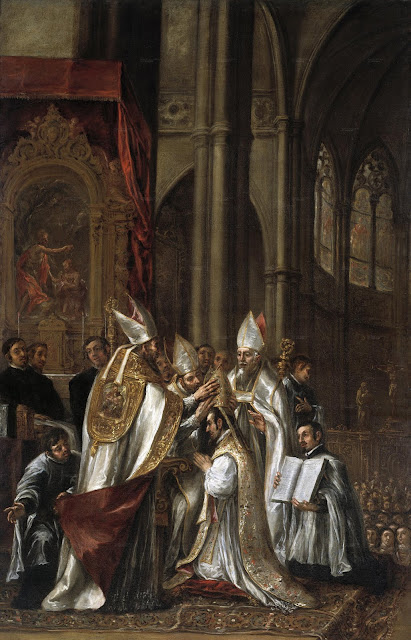 On 7th December we celebrate the feast of another great Doctor of the Church in fact one of the four original Doctors of the Church: Saint Ambrose, Archbishop of Milan (c. between 337 and 340 – 4 April 397)

In 373 Ambrose was elected Archbishop of Milan by acclamation.

At the time of his election Ambrose was not a Christian. But within a week, Ambrose was baptized, ordained and duly installed as bishop of Milan

The painting shows the consecration of Ambrose in the Cathedral

Ambrose was a great teacher and theoogian in his own right. Ambrose was Bishop of Milan at the time of Augustine's conversion, and is mentioned in Augustine's Confessions

On March 24, 1995, the Times Literary Supplement published a review by the late Professor Henry Chadwick on John M Rist`s book, Augustine, Ancient thought baptized. In the review he describes the Diocese of Milan where Ambrose was bishop and the influence of Ambrose on Augustine:

"At Milan, Augustine was recruited into a group which studied the Neoplatonic philosophy and introduced him to Plotinus, probably also to some of Porphyry. He was converted to the Platonic view that the evils in human experience are the consequence of wrong free choices, rather than a flaw in the created order for which the divine Creator is to be held responsible; moreover, in mysterious ways providence can transform evil for beneficent ends.

"God judged it better to bring good out of evil than not to allow evil to exist." This transformist view was reinforced by elements from the old Stoics, who thought one should exercise one's free will by an inner power of decision, and by realizing that good and evil are not in the body, or external things, but only in the soul, and its moral virtue. The reading of Plotinus on the divine beauty fired him with longing for mystical experience in a vision of the eternal and changeless realm of pure being where things do not "become". They are. ...

By coincidence (Augustine liked cataloguing coincidences in his life, in a manner which illustrates his deep disbelief in chance), during his professorship at Milan, the contemporary Bishop there, Ambrose, himself a former provincial governor of senatorial standing, was not only a fine orator in the pulpit but also an admirer of much in the writings of Plotinus and Porphyry, which he could read in Greek without difficulty.

Sermons at the cathedral impressed the sceptical professor not only by their polished Latin but by their intellectual content, very different from the kind of stuff he had once heard at his agricultural home town in what is now eastern Algeria. The gross and highly unsymbolic understanding of Holy Scripture heard in the pulpits of rural Numidia was far from Ambrose's philosophical interpretation, especially in homilies on awkward Israelite patriarchs or on the Psalms.

Moreover, the exquisite and haunting Psalm chants were important to an ear with a considerable feeling for music. Augustine began to think his mother, Monica's faith could conceivably be true after all. Although he had surprisingly little personal contact with Ambrose during his time at Milan, the Christianized Platonism he was hearing from the Bishop's sermons persuaded him that, while the Neoplatonism to which he had already been converted was teaching him much truth, it was incomplete.

As he put it, the Platonists profoundly discerned the goal of human nature and destiny, but the Christians knew better the pilgrim path by which one might actually get there."